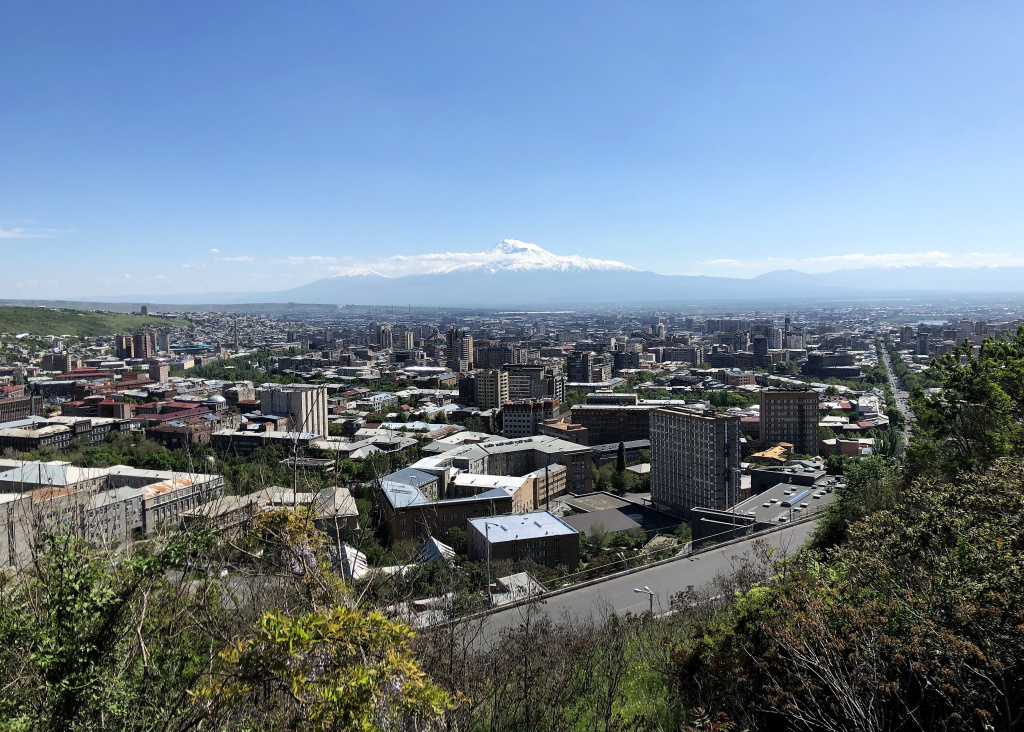 It seems like every time we visit Yerevan, a decade of history happens all at once. Our first visit coincided with the Velvet Revolution, incredible to witness but not ideal for sightseeing. We looked forward to a return visit with more stability and fewer health-related distractions. 2020 would definitely be the year for that! Things got off to a rocky (or icy?) start when our abridged stay in Albania forced us to move the next stop up by 7 weeks, landing us in Armenia’s capital smack in the dead of winter. It felt like our year had gone off the rails already. Little did we know just what a small bump it would be compared to what was ahead.

This post is about our 2020 visit to Yerevan. Read about all the unexpecteds in our 2018 stay here↗. 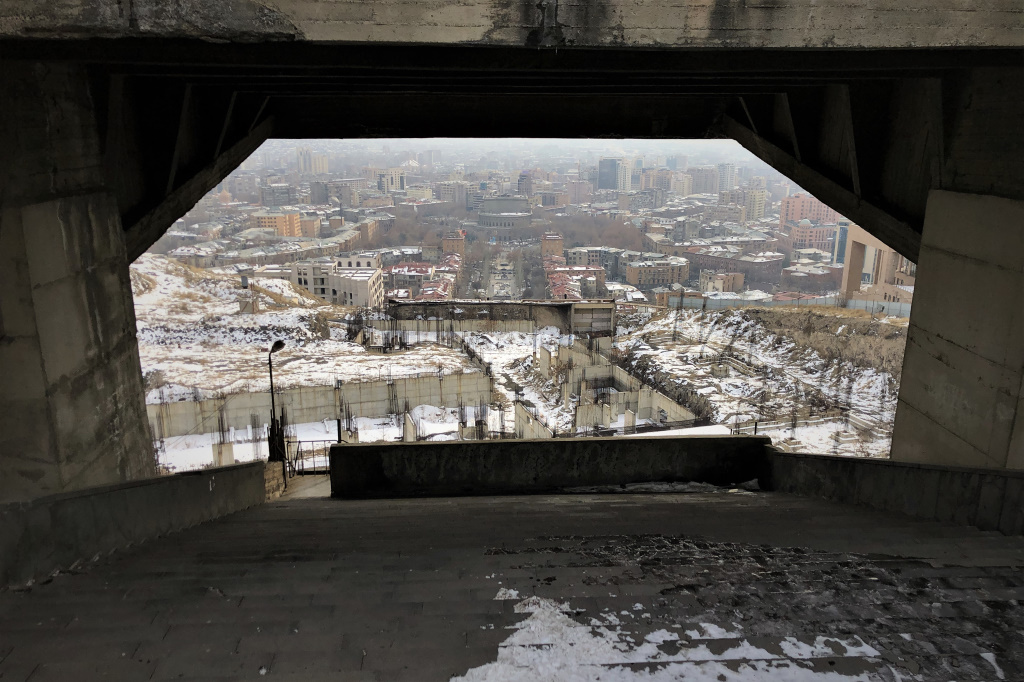 Already in January we’d heard news reports of a new illness working its way across the globe, though it still felt abstract and far away. We knew enough to nope out of an Athens airport restaurant restaurant when a man at the next table started coughing though. On arrival to Zvartnots, temperature checks were the first concrete signal that something serious could be happening. But mostly everything was business as usual. Taxi drivers vied for our attention and swore up down and sideways there was no bus running to the city center.

We took the bus to the city center, conveniently dropped just a couple blocks from our  Airbnb↗. Thanks to repeated assurances from our host there was no construction nearby, we could rest easy knowing we wouldn’t arrive to, say, a high-rise going up outside our bedroom window. 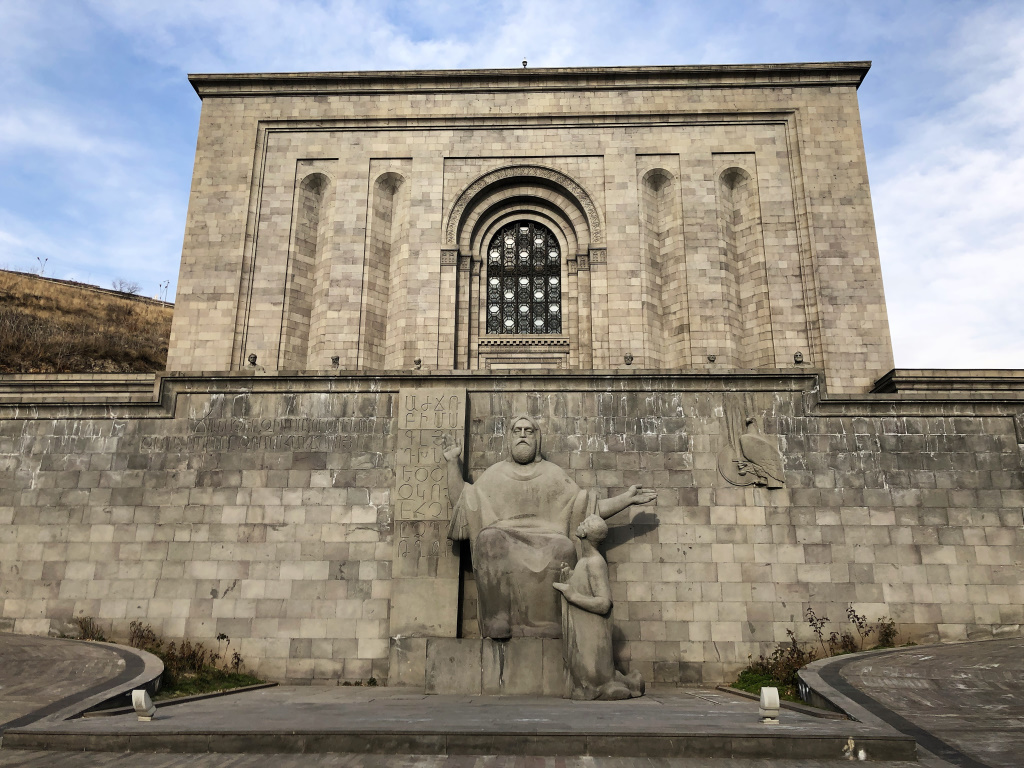 Between that and the blisteringly-cold weather, we tried to get our indoor sightseeing done early. Our first stop was the Matenadaran, because books! Armenians are incredibly proud of their language and unique alphabet. Their script traces its origin to a single person, Mesrop Mashtots. His statue guards the museum and his name graces many main streets. Religion-related texts are the most common in the museum since Christianity reached the region early and monasteries were centers of language and literacy. Artistic standards were high for church texts, and many initial letters are drawn and painted in the shape of birds (we’ve been told the higher the bird flies, the closer it is to God, meaning hawks are better than pigeons – a sentiment we definitely agree with). 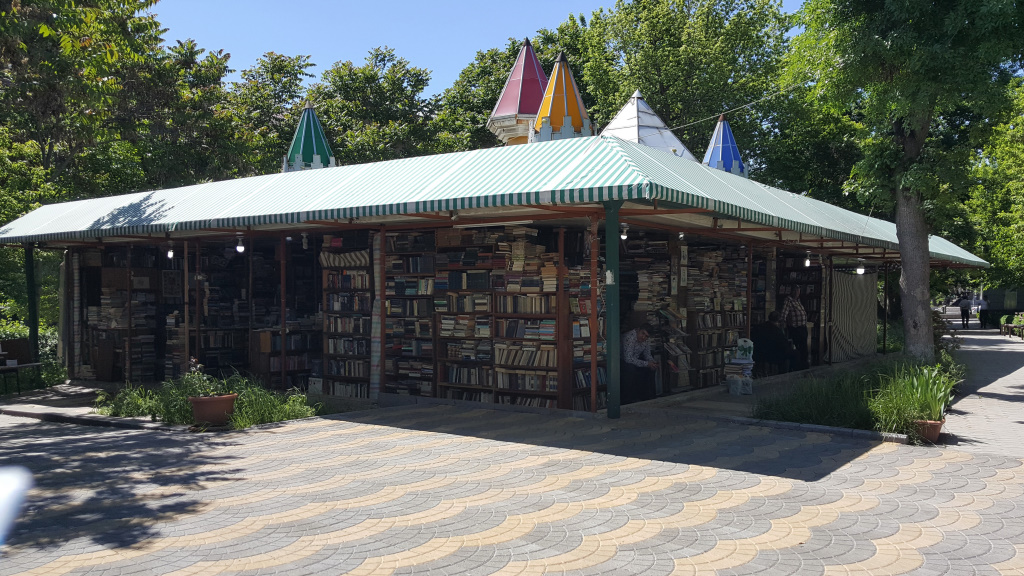 Speaking of the national love of literature, there are few cities where reading material is so readily available. There are outdoor book markets, book castles, and phone-booth sized book shops on street corners. Armenian and Russian were the most commonly available languages, but with a little looking we could find English as well.

Other arts are also kept accessible. The Opera building is a centerpiece of the city. We saw a performance of Anoush, Armenia’s most famous opera, for just a few dollars. Tickets start at $2 US. For a hefty premium of $20 USD, we snagged front-row seats. We also took in a free organ and violin concert at the National Centre of Chamber Music.

On other chilly days we went through the National Gallery and the National History Museum. The History Museum seems to go all the way back. The chronology spans from the world’s oldest shoe and phallic sculptures, to Roman inscriptions, to Armenia’s declaration of independence from the USSR. And fierce minders who insist on no photos. The National Gallery is more photograph-friendly. It seems like some floors are always closed, but the collection is incredible. Ararat is a favorite subject. For Armenians, the mountain represents the soul of the nation. Other works include vivid Biblically-inspired paintings and other, less-divine characters. 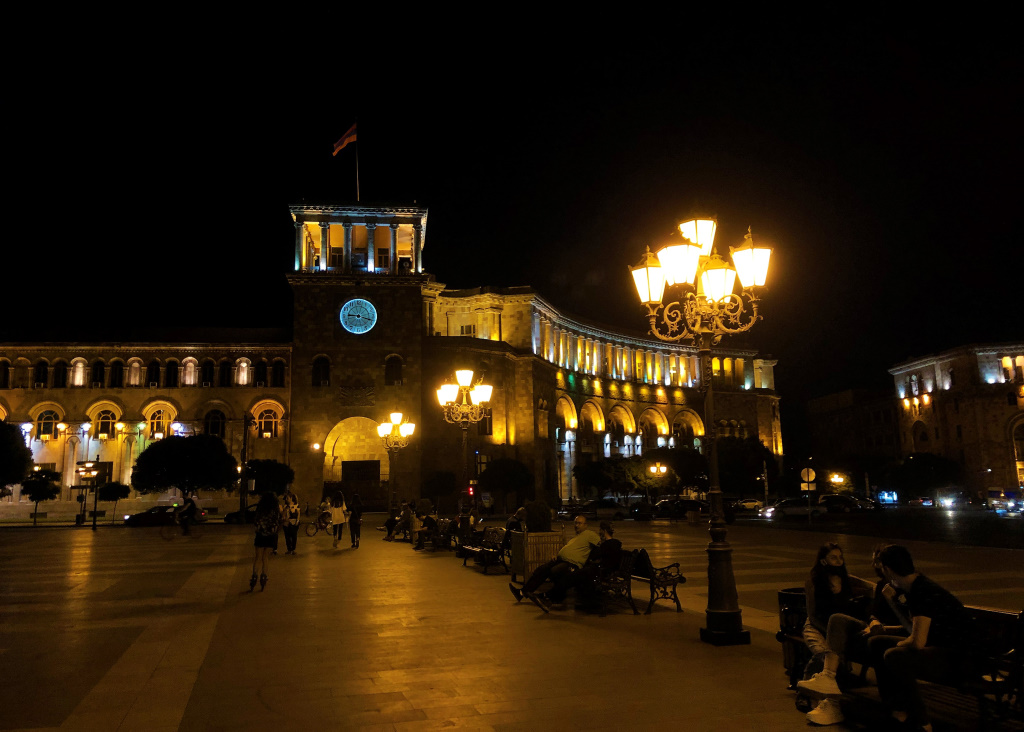 The museums make up one side of Republic Square. On our first visit, this square overflowed with thousands of protestors calling for change and then celebrating when the Prime Minister resigned. This time it was much quieter.

Closer to home, we found mini-markets, a fruit vendor, and a butcher with the best lamb in the region. There was even a woman who sold eggs in the courtyard downstairs. We were perfectly located for avoiding long sojourns in the cold and snowy weather of February. 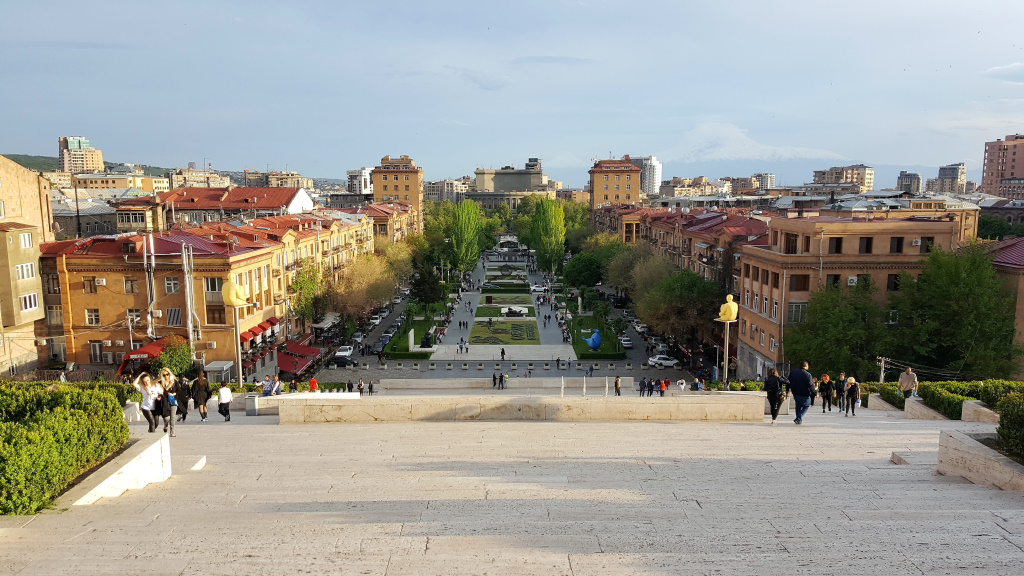 Within a few weeks, the weather softened enough to tempt us toward longer walks. We revisited the Cascade’s sculpture-lined park. Its art center is the best way to get above the city – long escalators even make the elevation gain easier. The steps are a favorite gathering spot for tourists and locals. With a view over the city’s rooftops and Ararat in the distance, this is THE image of Yerevan most people remember. 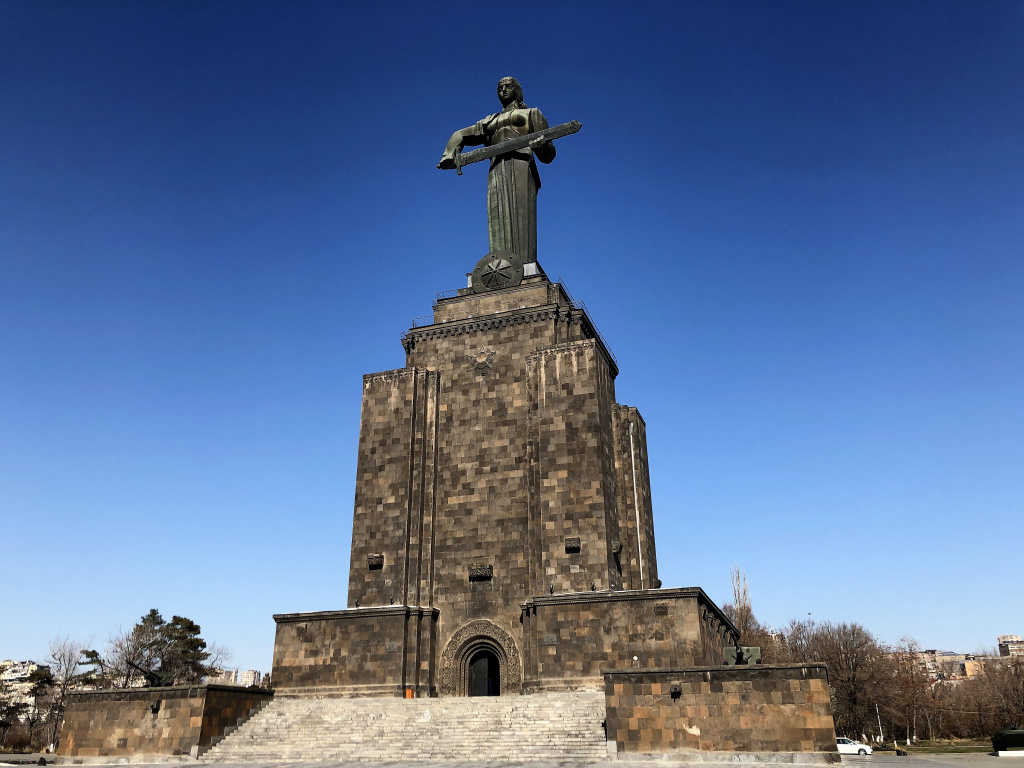 Just beyond the Cascade is Victory Park. Most of the space is given over to a mini theme park with dozens of rides for kids and a small go-kart track. At the eastern end is the massive Mother Armenia statue. Its base is large enough to house a whole museum focusing on WWII and the 90’s war over Artsakh inside. (We left Armenia in June 2020. The long-simmering conflict over Artsakh/Nagorno-Karabakh ignited again on 27 September. A ceasefire was signed by Armenia and Azerbaijan on 10 November. Thousands died on both sides.)

Now that the weather was getting nice, we started planning some trips outside the city. First up, a couple weeks in Etchmiadzin, a scenic town just half an hour west of Yerevan. A few days before we left, Armenia reported their first Covid cases. Masks still made only occasional appearances on the street. By the time we returned, the world had changed.

Read about our stay in Etchmiadzin↗, then return for Part Two of our time in Yerevan. 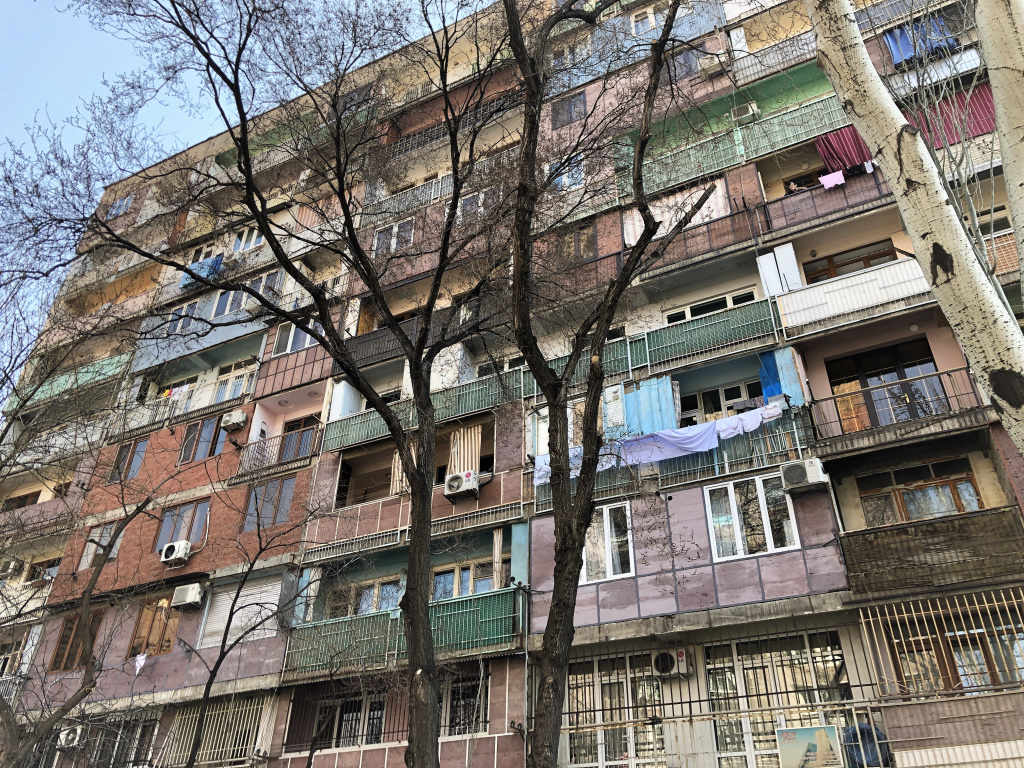 By our return at the end of March, Armenia was under a complete lockdown. Schools, borders, and nonessential businesses shut, gathering in large groups was forbidden, and masks were strongly suggested. Passes were mandatory for going out, even to the grocery store, and trips deemed nonessential could result in fines.

This time in Yerevan was not as pleasant. Still, we learned to live with the new normal. Nobody loves lockdown, but with the country’s limited medical capacity and no cure on the horizon, we understood the need to slow the spread. The main issue was our new apartment – it was awful. And we were stuck in it for the foreseeable future. Dingy, run-down, and leaky, it had a mold problem that kicked Kevin’s allergies, already on notice, into high gear. The host could not care less. We eventually ate the remainder of our stay and relocated to a nicer apartment across town.

Of course, a quick visit to scope the place out didn’t reveal its darker secrets, like our elderly neighbor’s nightly yelling fits. It sounded like a mental or age-related decline rather than violence, so we had no choice but to get very into white noise apps for a while. 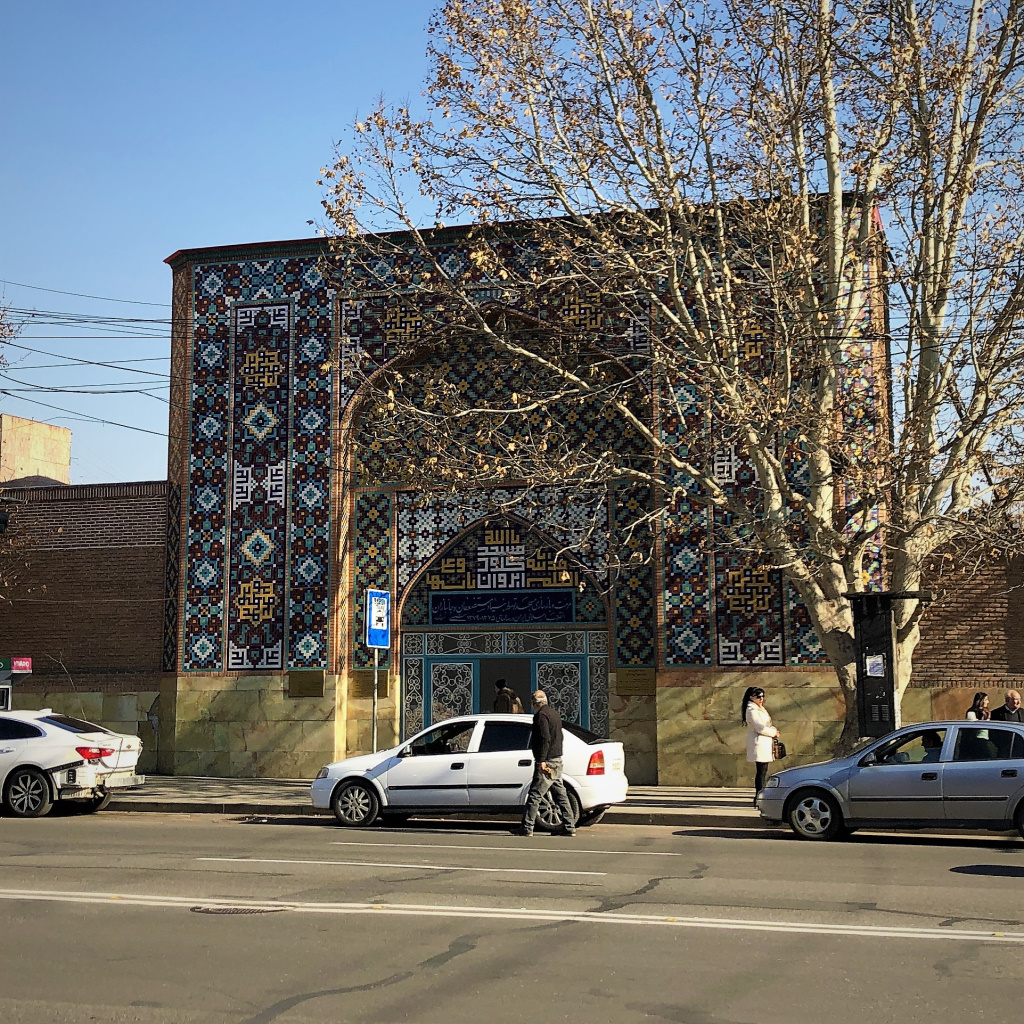 Eventually we relocated yet again, this time just a couple blocks from the Blue Mosque. It felt homey enough. We originally planned a month in the mountain resort town of Dilijan, but were forced to cancel as travel between provinces was still forbidden. Unfortunately, a quiet refuge hiking Armenia’s most beautiful national parks and hiding out from the virus-induced chaos was not in the cards. Instead we made the best of our crowded isolation, hurrying up and waiting for whatever came next. 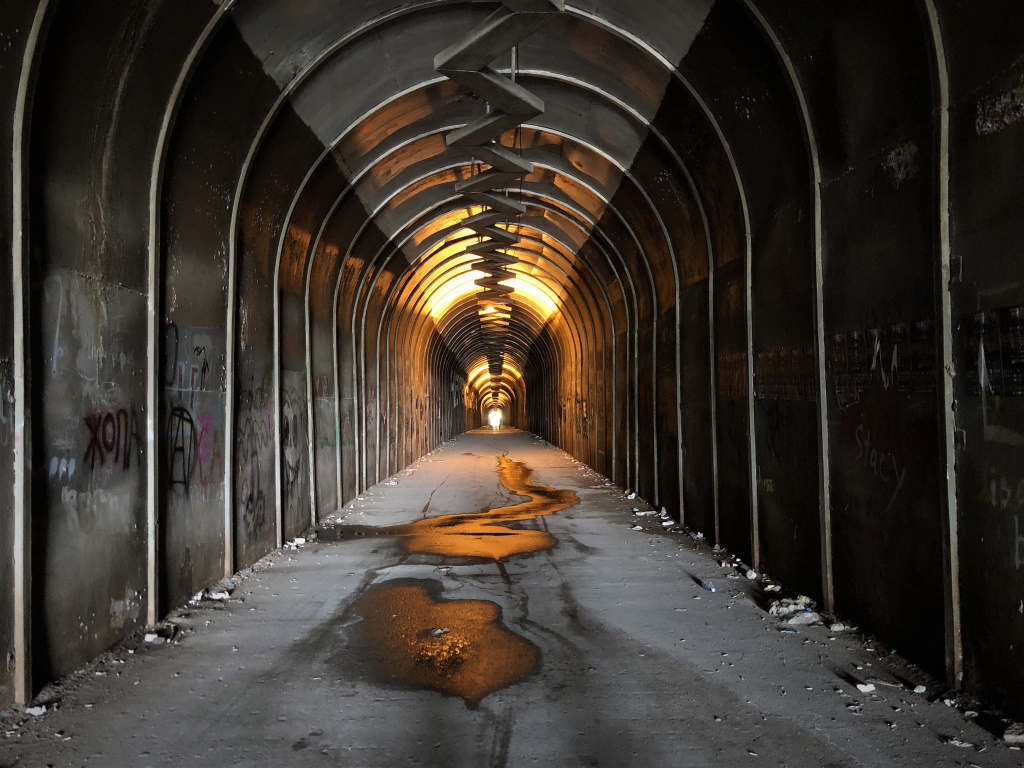 Mandatory lockdowns and stay-at-home orders worked for a time. But the national budget of Armenia is only about on par with a large American city. Supporting its citizens indefinitely simply wasn’t an option. So with Covid numbers rising the lockdown lifted. People went back to work and life creaked to normal, only with lots more hand sanitizer and mask-wearing. Okay, still fewer masks than there should have been. And almost always worn wrong. We joked that if Covid infected chins Armenia would be the safest country in the world.

We used our new-found freedom to get some fresh air (and social distance) in Hrazdan Gorge, a beautiful refuge just outside the city center. The quickest way to reach the gorge was through the Kond Pedestrian Tunnel. Sure, it was dark in spots and drippy and the walls bulged inward at very ominous angles, but the graffiti was striking. 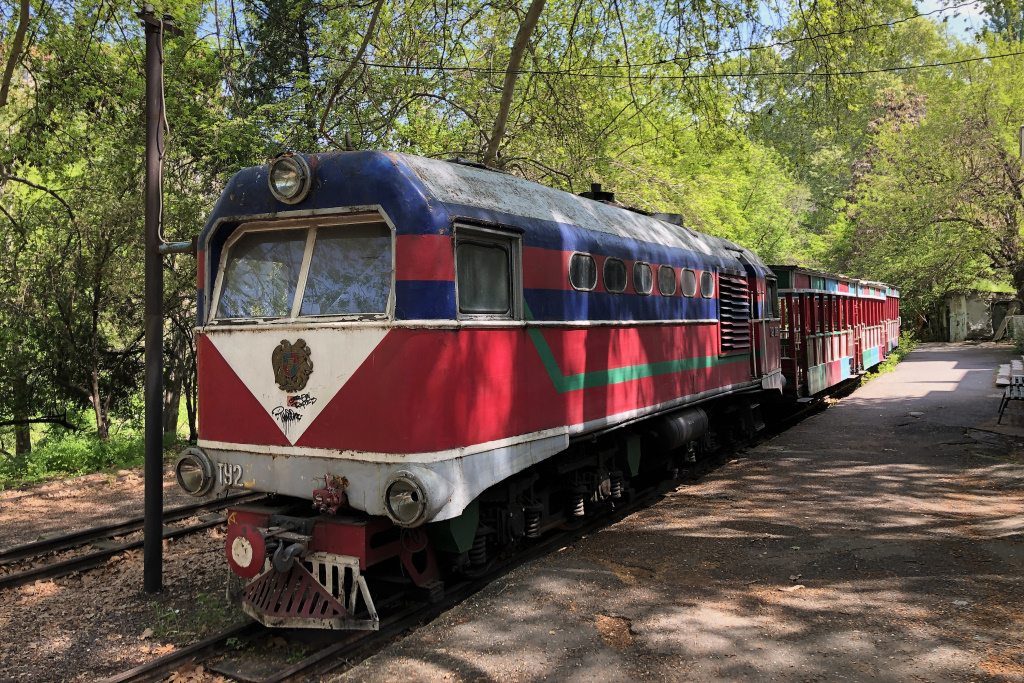 In the gorge was another children’s mini park as well as the Children’s Railway. The trees leafed and yellow and red flowers bloomed. On the way back we could stop at Dargett Brewery to fill a growler for takeaway. They had done us right on our first trip and their specialty beers were still the best in town. A few blocks over, Dors Craft Beer and Kitchen was new on the beer scene. Their drafts also were much higher quality than the grocery store bottles. We stopped in once or twice early in the day once on-site dining resumed. Early for drinking, but the best way to ensure distancing And anyway, who’s gonna judge us. It’s a pandemic.

Since our first visit in 2018, the beer choices had improved a bit, but it’s hardly the drink Armenia is famed for. In Soviet times each SSR was assigned a good to specialize in: Georgia had Borjomi water, Moldova had wine, and Armenia had brandy. Even being one of the oldest wine-producing countries in the world didn’t save them; that entire industry was torn up and refocused on brandy alone. Before the pandemic hit, we had a chance to tour Noy, one of the two most famous distilleries in the country (after Ararat). Though the current factory is new – rebuilt in the early 2000s – the site has a long history as a factory and, before that, an ancient fortress. Noy has begun dabbling in wine, slowly rebuilding that industry after the long lapse during communism, but started so recently there wasn’t any yet for us to taste. Instead we sampled wine from their old, pre-Sovietization store. The red was produced in 1944. It was still delicious. As, of course, were the brandies. (Don’t worry, we got to try plenty of other Armenian wines during our stay too.) 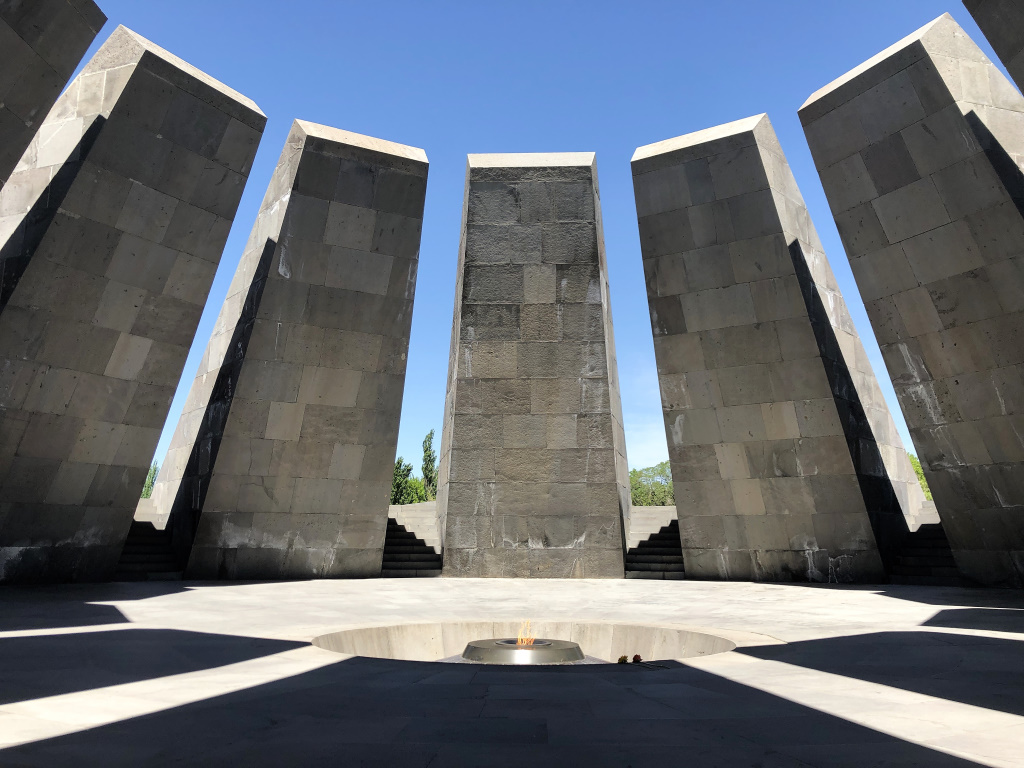 Once again we were in Armenia for Genocide Memorial Day on April 24. Unlike normal years, 2020’s celebration had to be scaled back. Tens of thousands of people wait for hours in order to lay flowers at the Tsitsernakaberd Genocide Memorial. With large gatherings forbidden, the nation instead remembered with a pillar of light rising from the memorial and thousands of candles, flashlights, and cell phones shining from apartment windows. 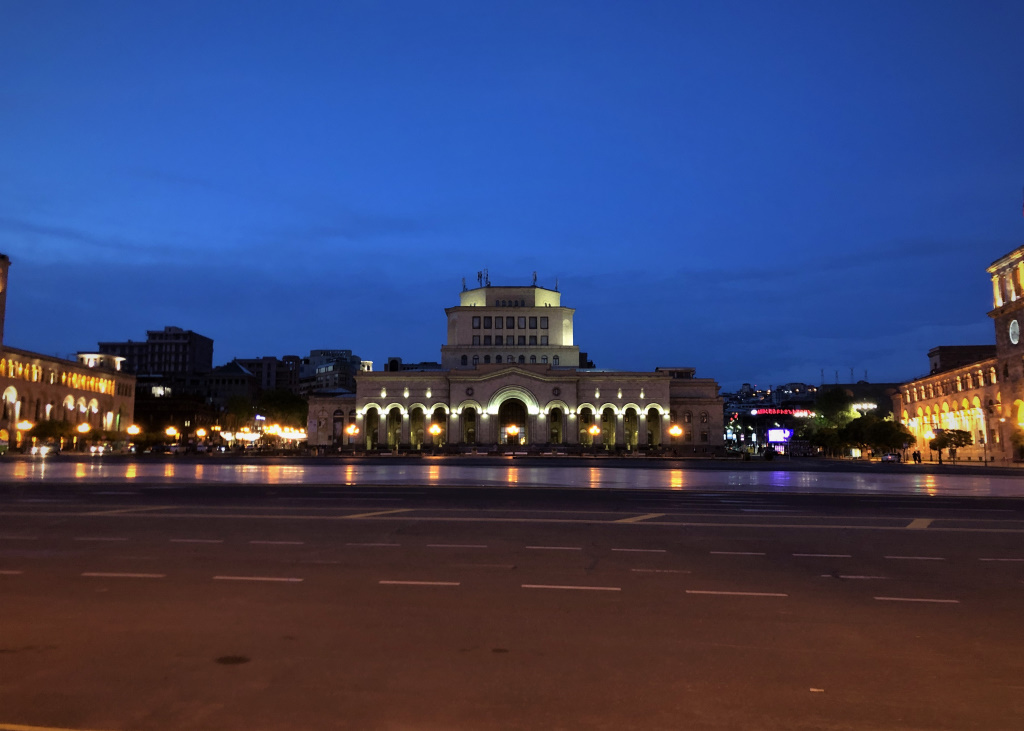 Republic Square, normally ground zero of companies selling touristic day trips, remained nearly deserted. The borders stayed closed, making us some of the few tourists left in the country. And it’s not like we could do all that much to make up for it, either. We were too worried about Covid to pay a visit Tatev Monastery or Khor Virap. Staying home to protect ourselves and others was the responsible thing to do, but we were still disappointed by everything we couldn’t see. Now all we can do is wait until the next time we are in Armenia. 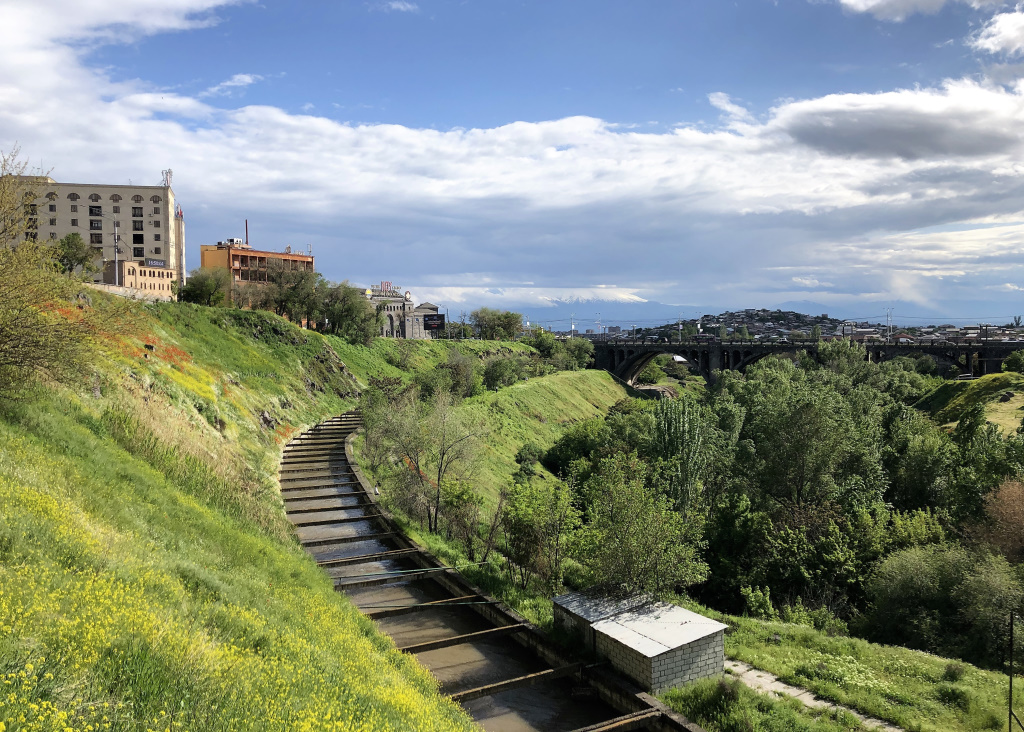 In retrospect, we definitely wish we’d embraced the winter weather and went to Stepanakert and Artsakh in February, before everything changed. By spring, when we’d intended to visit, the border was closed to foreigners. And later the cold war between Armenia and Azerbaijan turned hot. Cities in the disputed region were shelled. Now there is a tenuous peace but also big questions about how the territory will be administered and protected, let alone visited.

The pandemic has been a potent reminder of just how lucky (and right) we were to take advantage of our freedom to travel while we had it. For the rest of 2020, simply getting by without a place to call home was going to be a lot more difficult; our rootlessness a liability rather than an asset.