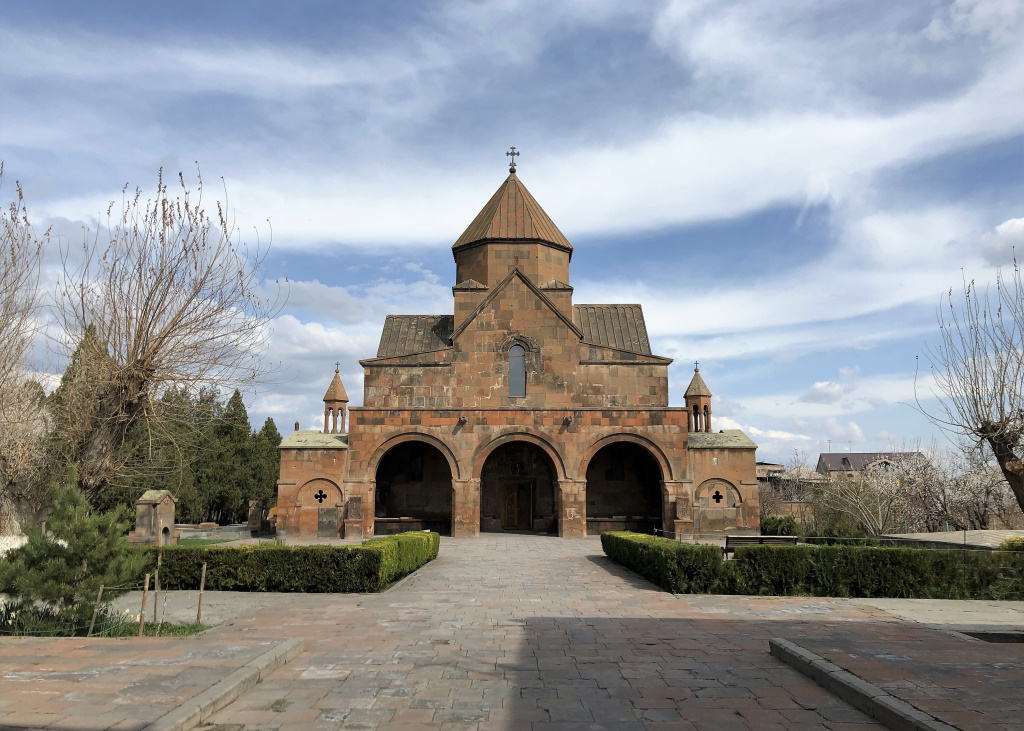 Where were you when the world became a plague state? We were in Etchmiadzin, Armenia. Which, it turned out, was about to become the epicenter of Armenia’s first Covid outbreak. All we wanted was a quiet stay as spring started. A chance to wander around the region’s famous churches and admire mountain views. Instead, we watched in disbelief as the world confronted a global pandemic. 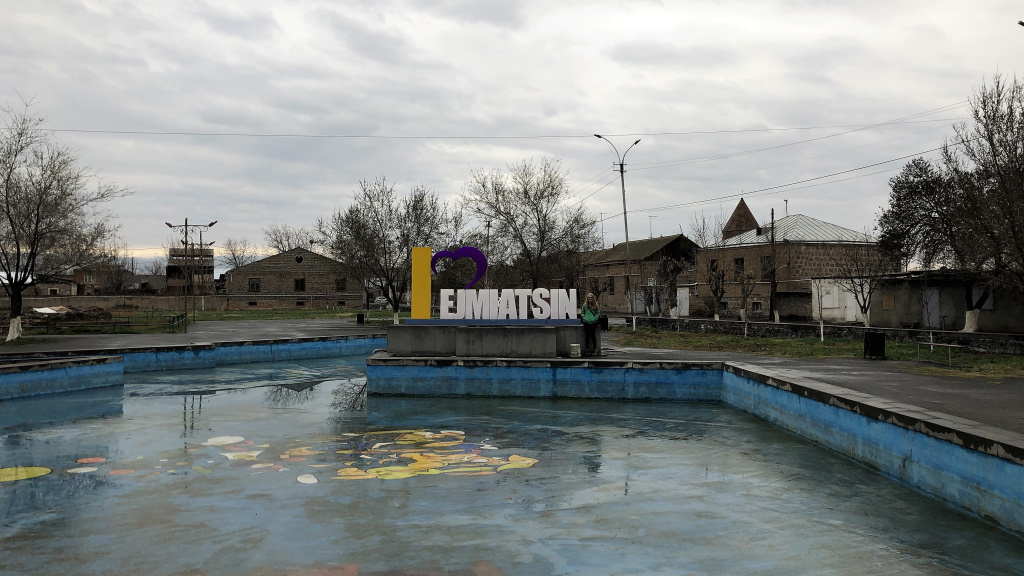 Though far smaller than Yerevan, Etchmiadzin looms large in Armenian’s consciousness. (Ejmiatsin, Echmiadzin? The actual, official name is none of the above: Vagharshapat. Etchmiadzin refers to the Armenian church’s Holy See located in the city, but the church’s name is a popular shorthand for the town as a whole. It’s a little like referring to Rome as the Vatican.) 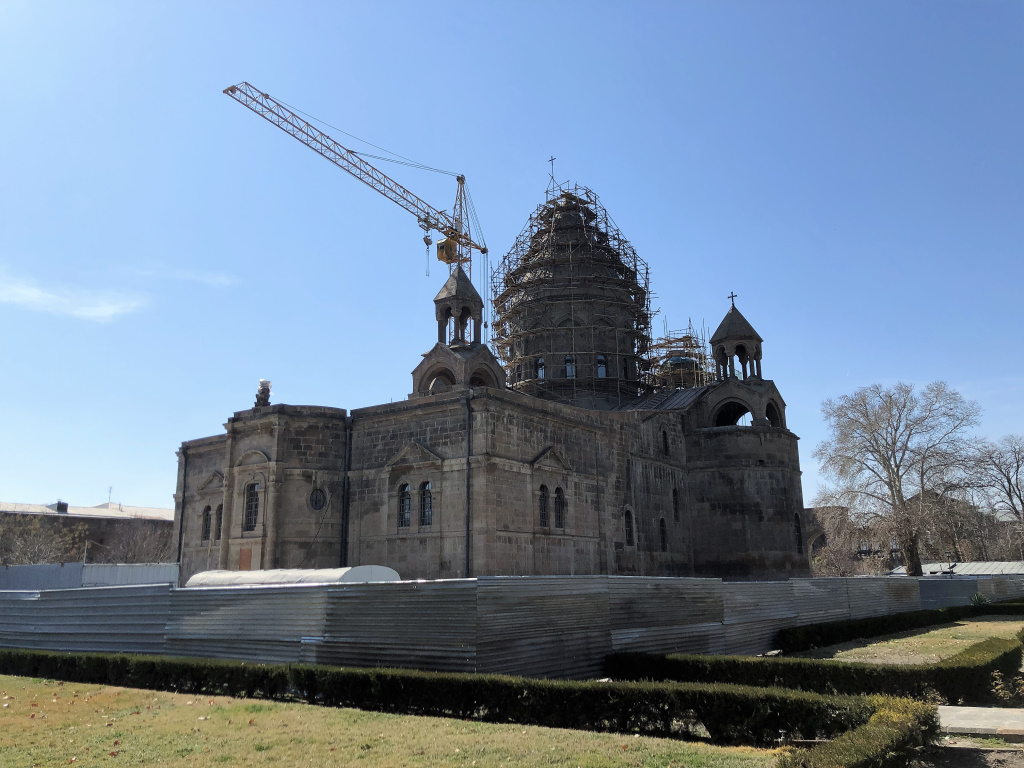 Vagharshapat has ancient origins. It was serving as a capital when King Tiridates III converted and made Christianity the state religion in 301 C.E. A Cathedral, Etchmiadzin, was constructed shortly after and has remained the heart of the Armenian Apostolic Church. We visited a couple times, where possible. Unfortunately, we found the Cathedral deep into renovations. We were relegated to views of its scaffolded cupolas. In lieu of a rarified church interior, we watched the construction crane doing a delicate dance to preserve the surroundings – hauling loads over trees, down a long, narrow track, and finally down to the actual worksite. 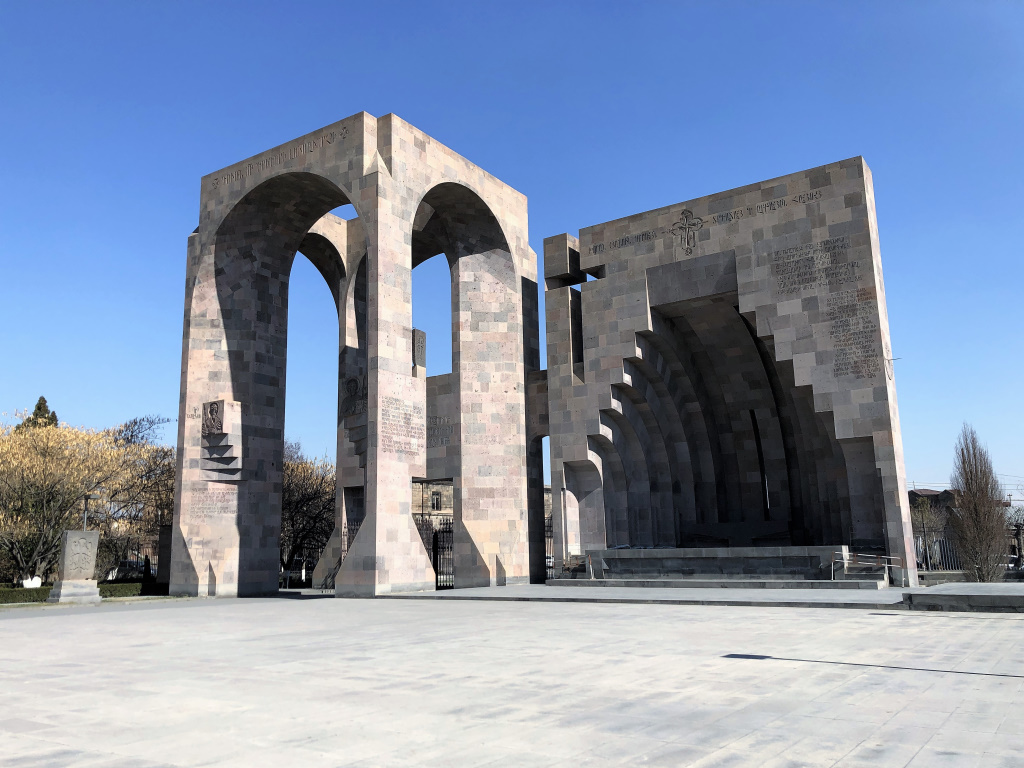 The rest of the See is a sprawling complex. It houses multiple churches, a seminary, a museum, and the residence of the Catholicos (essentially the Armenian pope). Groups of beautifully carved khachkars (cross-stones) are preserved there. On most days, locals use the area as a park space, picnicking in the grass and meeting friends (though we imagine the rules of behavior are at least a little better here than in your typical parks). 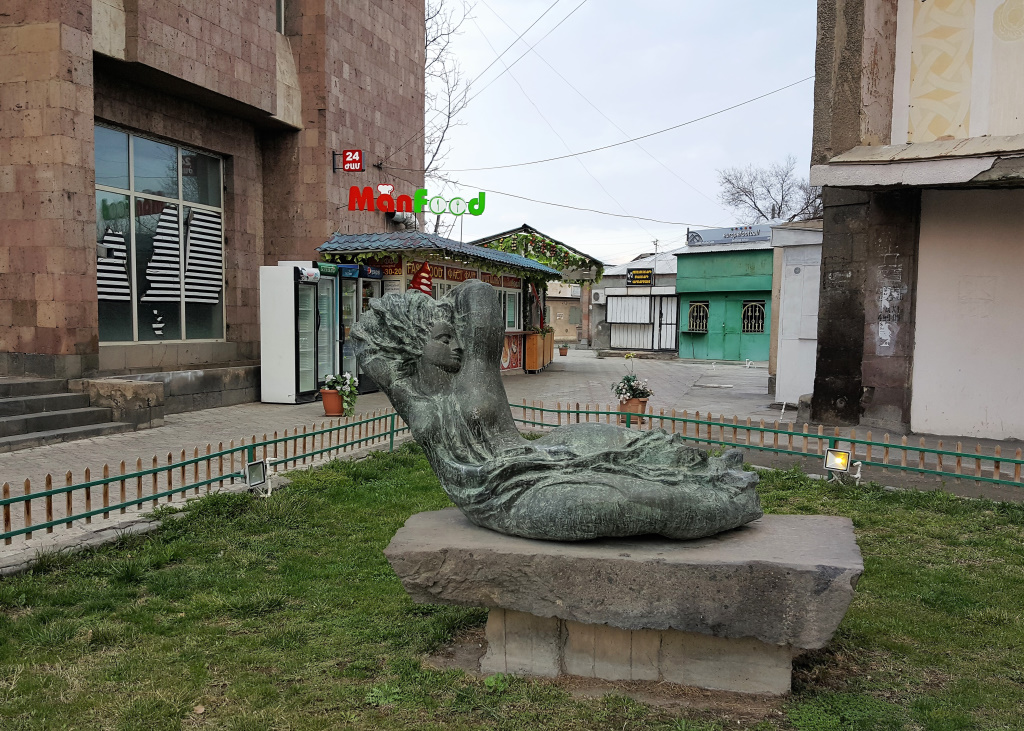 The rest of the town center isn’t particularly memorable. There were the usual assortment of businesses and a local market where ladies laughed with us as we stumbled through transactions in Armenian. Our favorite discovery was a traditional bakery serving lavash fresh from a brick oven for ֏100 ($0.20US). It was impossible to walk past without the aromas drawing us in.

So. The year was about be commandeered. Covid-19 was taking over. We’d been aware of the expanding reach of Covid for weeks. Since arriving in Etchmiadzin, sports had been suspended. Nations were closing their borders. Now, Etchmiadzin itself was a ‘hot zone.’ One knowingly sick person attended a wedding and infected dozens. The city was promptly put under lockdown. Anyone leaving needed a temperature check. And… within six days of arriving… we were sick. With no grocery delivery available, we bought all the food we could carry in one trip and hunkered down. Armenia set up a hotline as cases increased. We called, but didn’t have temperatures, and so didn’t qualify for tests. (Good call on their part – a later antibody test was negative for Covid.) Our host brought us homemade vodka and wine so potent that he promised it would kill whatever was living in our bodies that shouldn’t be. 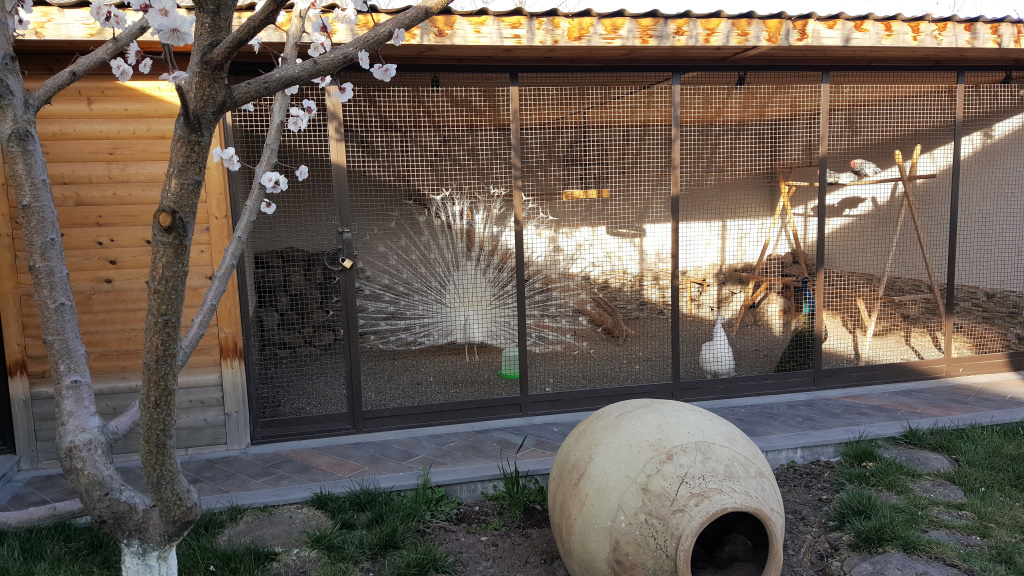 Since we were going to be spending so much time indoors, it was fortunate we rented a spacious house on Airbnb↗. It was comfortable and beautifully renovated (the sink even had a garbage disposal, nigh-unheard-of outside the US). A yard of raspberry vines, chickens, and peacocks was a welcome change of view compared to Soviet-era apartment blocks. Three semi-grown kittens lived at the house and coaxed food out of us. By the end of our stay they simply sat on our porch and screamed for their expected meal. In return, we were almost allowed to pet them without being scratched or bitten. For days we looked at the slim profile of distant mountains from our patio, played Nintendo, watched the endless news coverage of the spreading virus, and generally managed not to go stir-crazy. 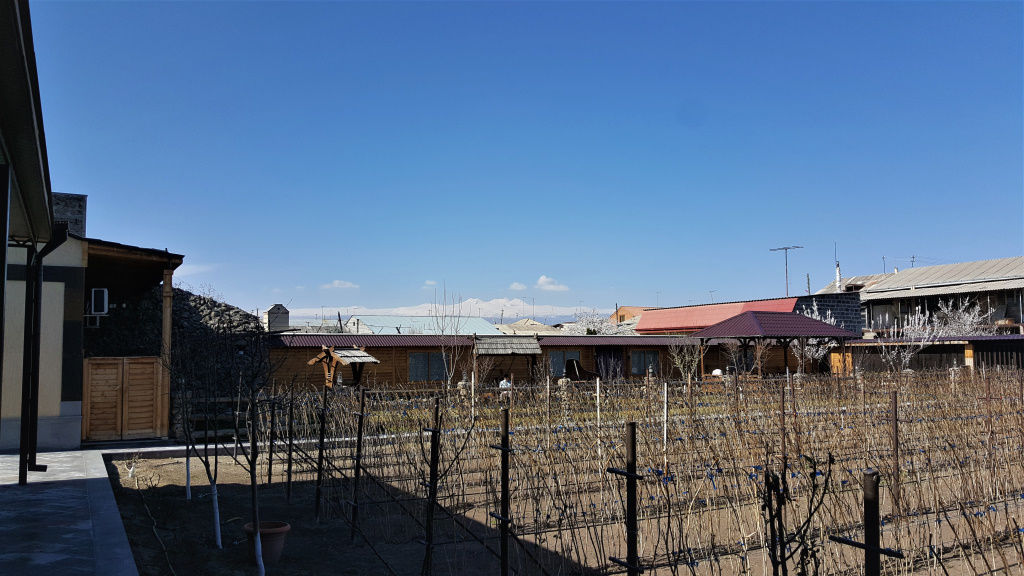 We recovered. We ventured out again, staying away from others. Judging by the sound of coughing at the grocery store, we weren’t the only people that had come down with something, though we still didn’t know if it was flu, cold, or Covid. As cases spread into other cities in Armenia, the government ordered non-essential shops closed. Social distancing became the norm.

Like travelers everywhere, we had an urgent choice to make – should we evacuate and go home? Or hunker down where we were, but for who knows how long? The decision was made easier by Armenia’s near-total shutdown of air travel, and our own barely-functioning government’s less-than-generous repatriation offer. One single flight was belatedly organized promising to dump us at a hub in the Middle East for the unsubsidized sum of more than $1000/person. From there, we’d be responsible for getting the rest of the way ourselves.

We had already booked places in Armenia through the beginning of June, and anyway, where would we go home to? We had nowhere to call our own in America. Not to mention we had zero faith in the administration back there. In retrospect, an understatement to say the least. 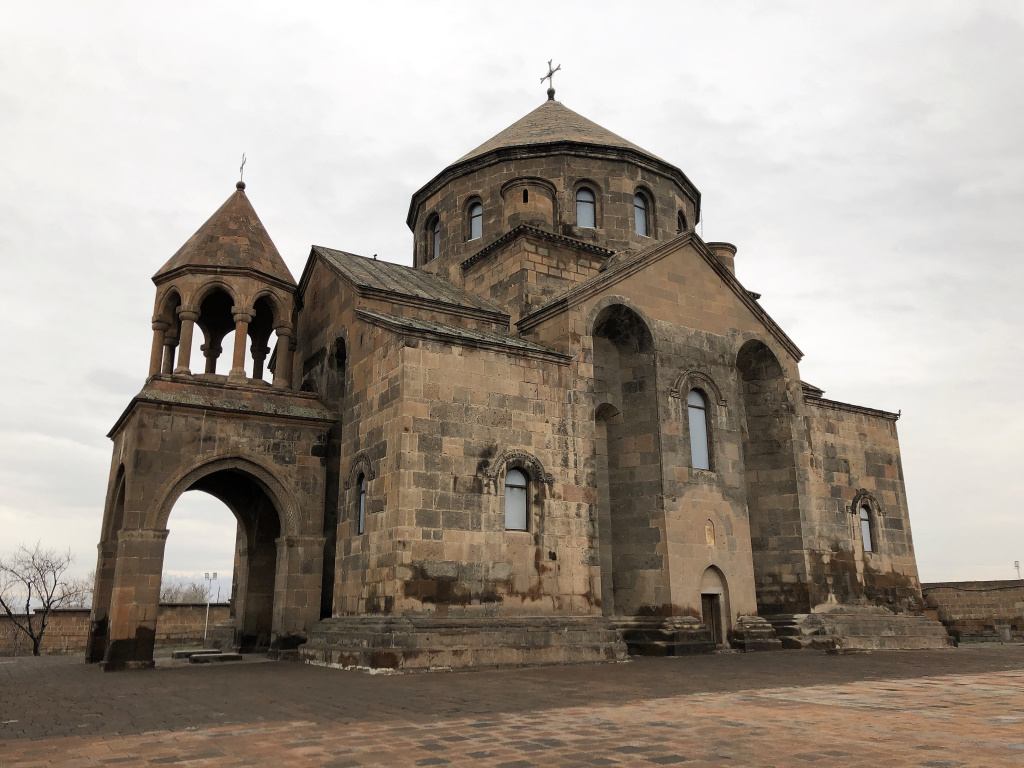 So we decided to stay. At least from our vantage point, with stories streaming out about toilet paper shortages and sanitizer droughts, Armenia felt like an island of relative calm. Maybe we could ride things out here until the world goes back to normal. Surely by summer, right?

In the meantime, our bustling town felt emptied. We took ourselves to St. Hirpsime Church on abandoned sidewalks. The grounds were open but deserted; the church itself closed. We also visited St. Gayane, just south of the Holy See. A priest noticed our non-Armenian-ness and gave us a quick tour. A church built to honor the martyred St. Gayane has stood there for over a thousand years. In fact, her bones are still entombed under the altar. The priest offered us a blessing for health and for many children. We shall see. 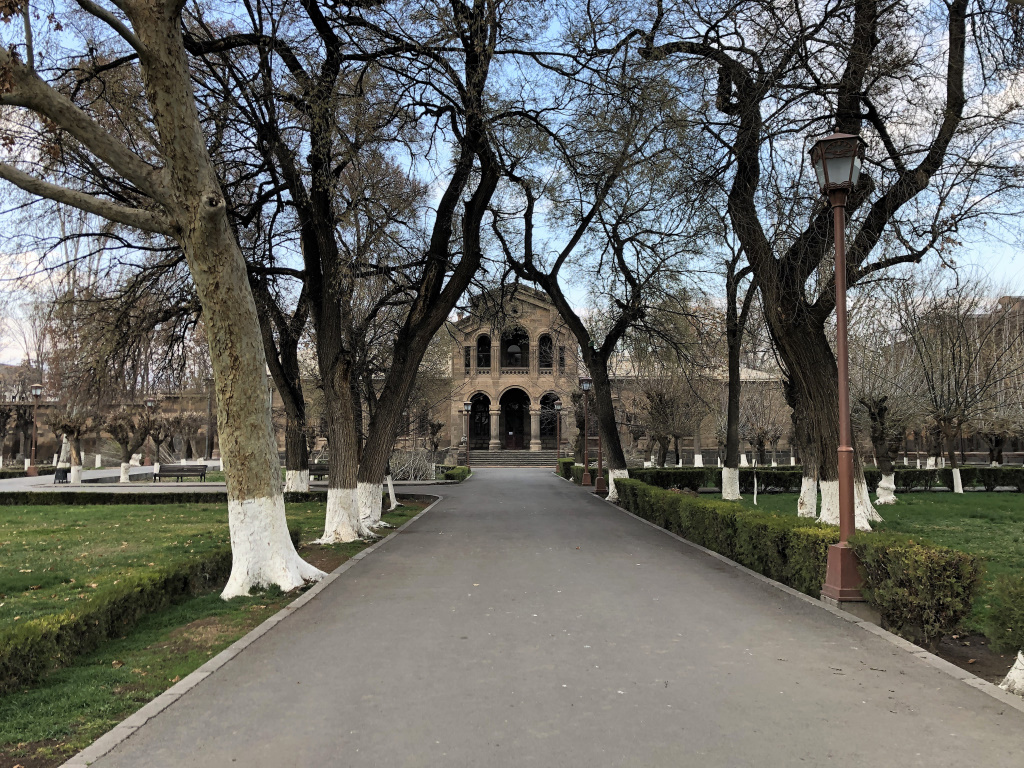 With our time up in Etchmiadzin, it was time to return to a very different Yerevan. We wrote up a (now-mandatory) travel pass and took a taxi rather than a marshrutka back. We would come to regret leaving that lovely little house with a yard. It was all tiny apartments and tightly-controlled trips outdoors for a long time to come.