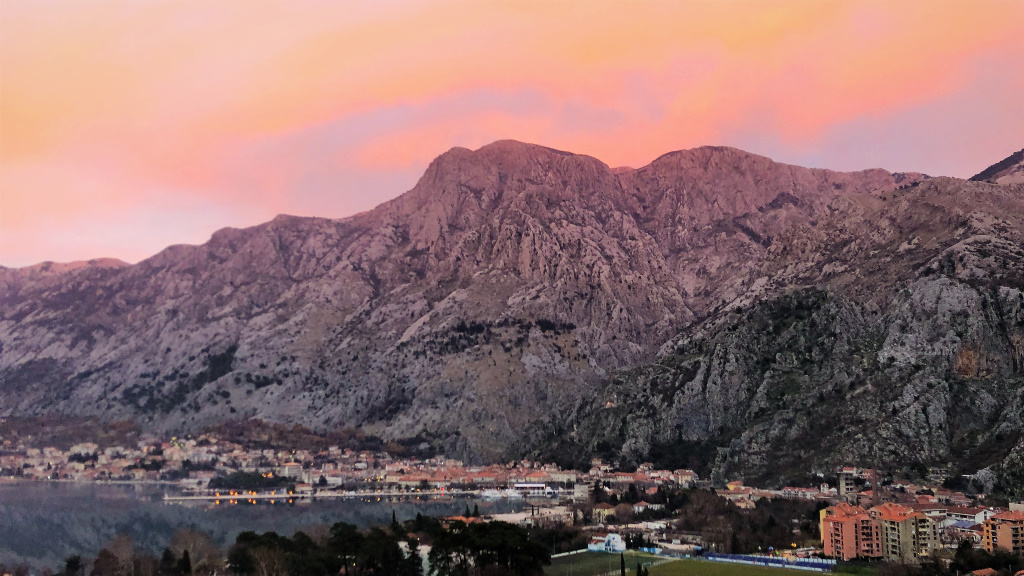 Of all the towns we’ve lived in while on the road, Kotor, Montenegro may be the most picturesque. It nestles into a mountainside, deep in a protected bay. The fortified old city sits on a narrow ledge next to the water. Perched on a steep rock bluff above, a Venetian fortress stands guard. It was made for us↗.

We flew into the capital Podgorica on New Year’s Day, slightly sleep deprived from a night of fireworks and singing neighbors. Public transit from the airport is notoriously bad so we booked a GoOpti↗ transfer to Kotor. We’d previously used them to get from Venice to Rijeka; here we turned out to be their first-ever customers in Montenegro! The driver was the new franchise owner and we chatted with him and his associate on the short but scenic drive. Seriously, driving nearly across the country only took about an hour and a half. 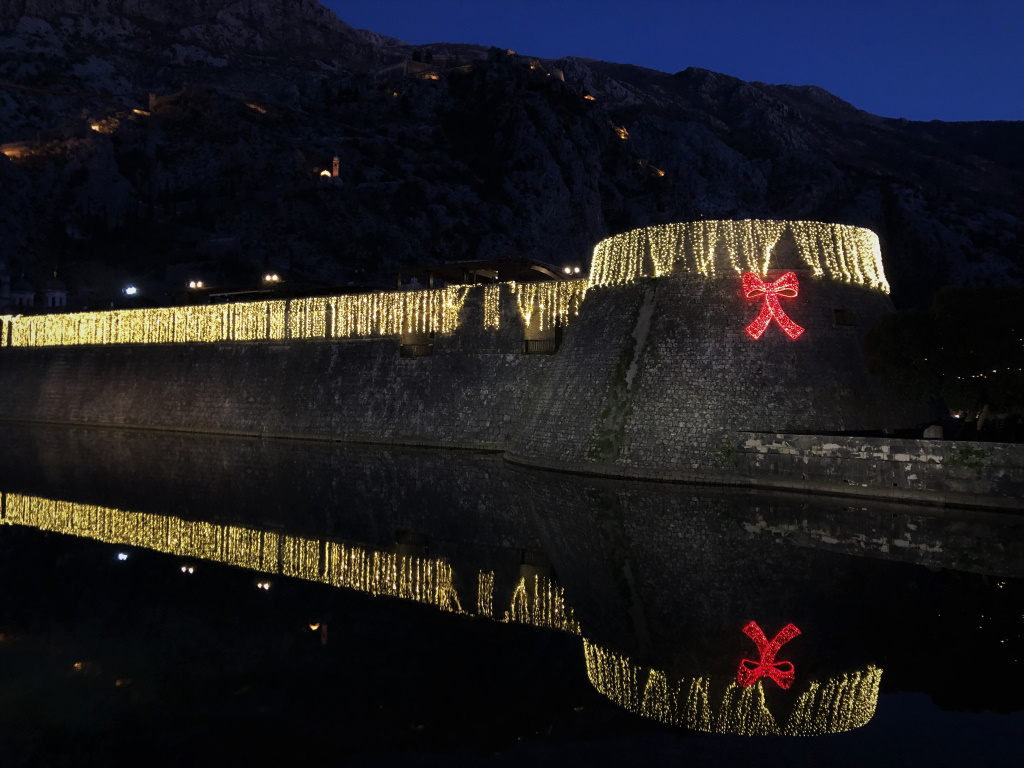 Arriving on a holiday, we anticipated closed grocery stores, but a tourist town was sure to have plenty of restaurants? Not as many in the off-season as we hoped, it turned out. Luckily Kotor’s tiny, five-boothed Christmas market was selling hotdogs and crepes, so we survived. Snacks from the gas station rounded out the repertoire. Peanut butter popcorn in particular was a clear winner, two of Danielle’s favorite tastes that tasted surprisingly great together.

The city walls had donned strings of lights and ribbons for the holidays and each gate had a few decorations. Festive, but we were happy with our choices of Zagreb↗ and Budapest↗ for Christmas proper. On the other hand we discovered that holidays in Montenegro are two-day affairs. Everything remained closed through January 2nd! “They sure do holidays right,” we consoled ourselves, grudgingly noshing Pringles and cup noodles for dinner. 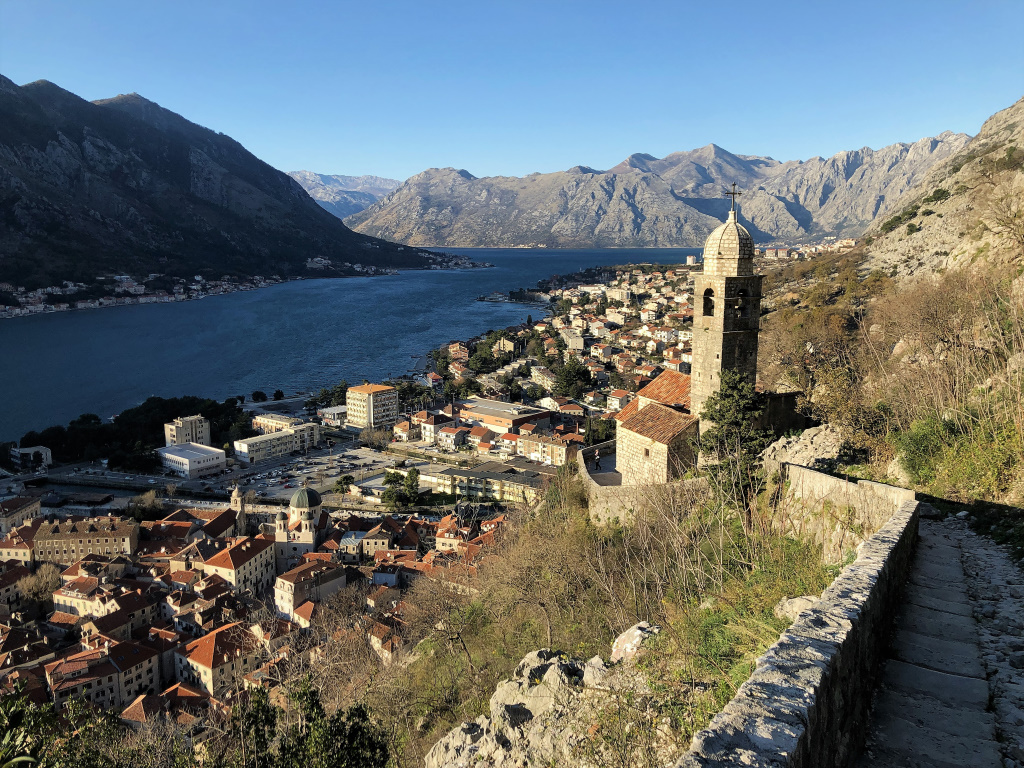 Many if not most of Kotor’s visitors arrive on cruise ships. Even though they get just a few hours on shore, that is enough to see pretty much all the old center and San Giovanni Castle above. Staying for more than a few days, much less a month, is unusual. The handful of locals were more than a little bewildered by us. We spent most of the stay wandering a veritable ghost town. Just the way we like it.

We found our apartment on Airbnb↗. Unfortunately our host failed to disclose their price left out the 1€ pp/day guest tax, sticking us with a surprise $60 surcharge for our monthlong stay. Luckily Airbnb sided with us when we complained about the hidden fee. But plenty of other listings also left out this little detail, something potential visitors should keep in mind. 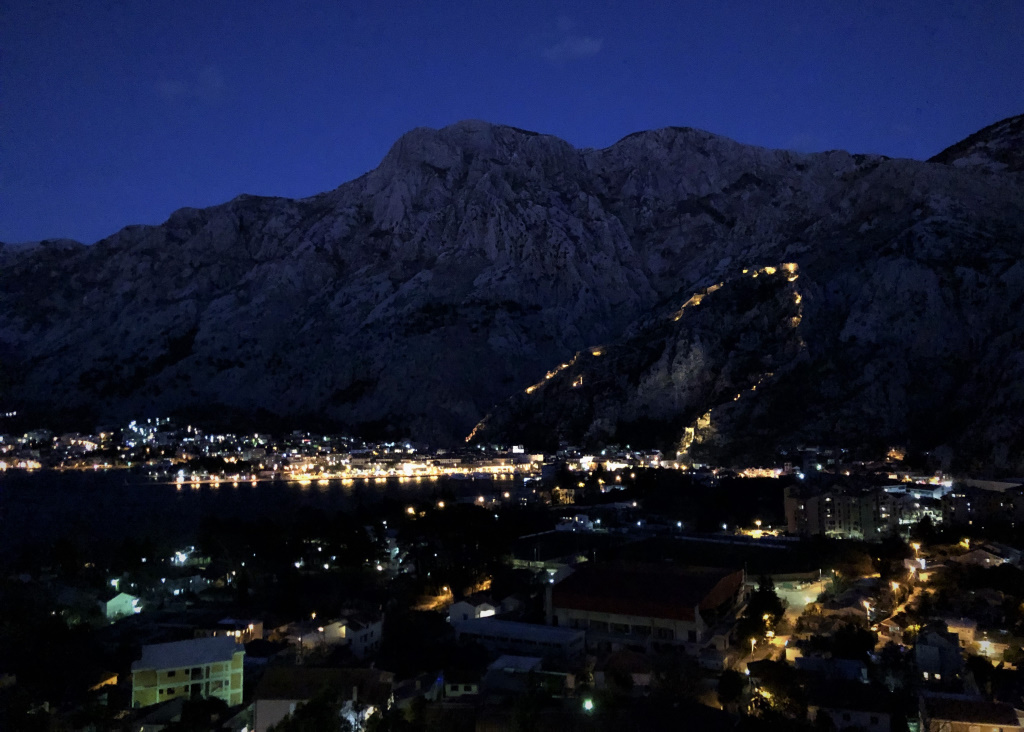 That annoyance behind us, we actually enjoyed our apartment in Škaljari. Floor-to-ceiling windows gave us a dazzling view of the castle and town. At night the fortress and walls sparkled in a thin strand of light At sunrise and sunset the gray mountains bathed in pink and orange, illuminating the valley with an otherworldly glow. 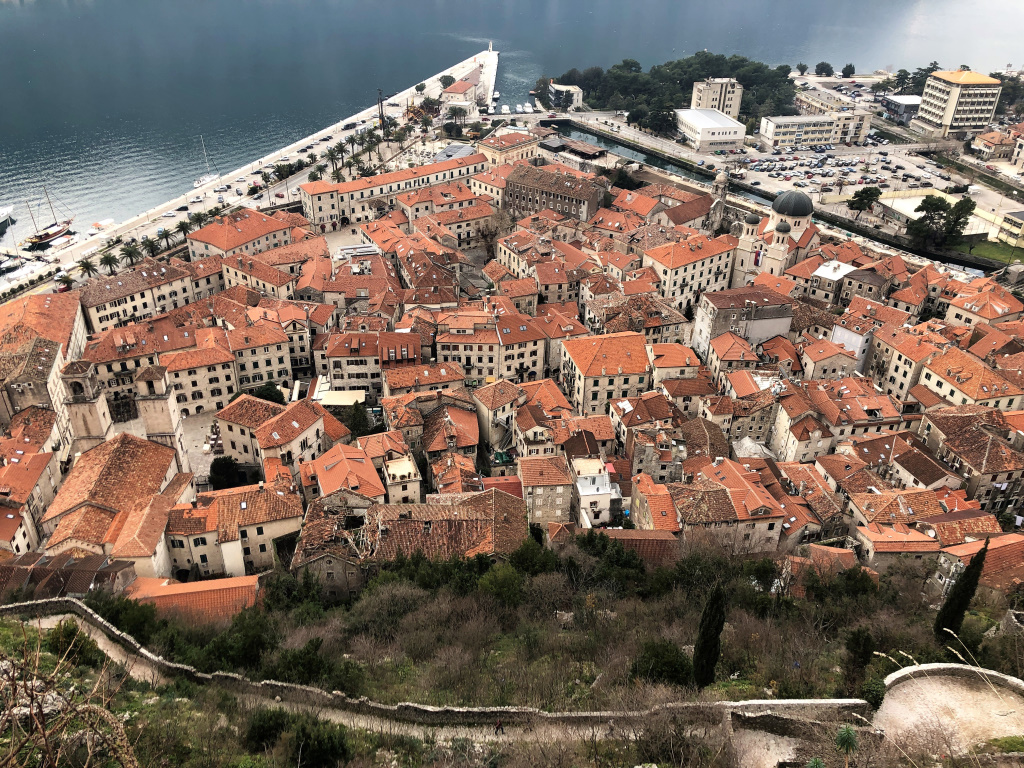 It’s true that, like day-trippers, we saw everything in town in one sitting. There are only so many streets that can fit in just 3 hectares of ancient walled city. But those narrow and confined lanes make it easy to imagine intrigues and seiges from another time. Many of the shops and restaurants in the Old Town were closed for the off-season. Even the Cats Museum was under renovation. Our main disappointments were that the craft beer bar and the outstandingly-named Space Jam fast food were hibernating to await warmer crowds. 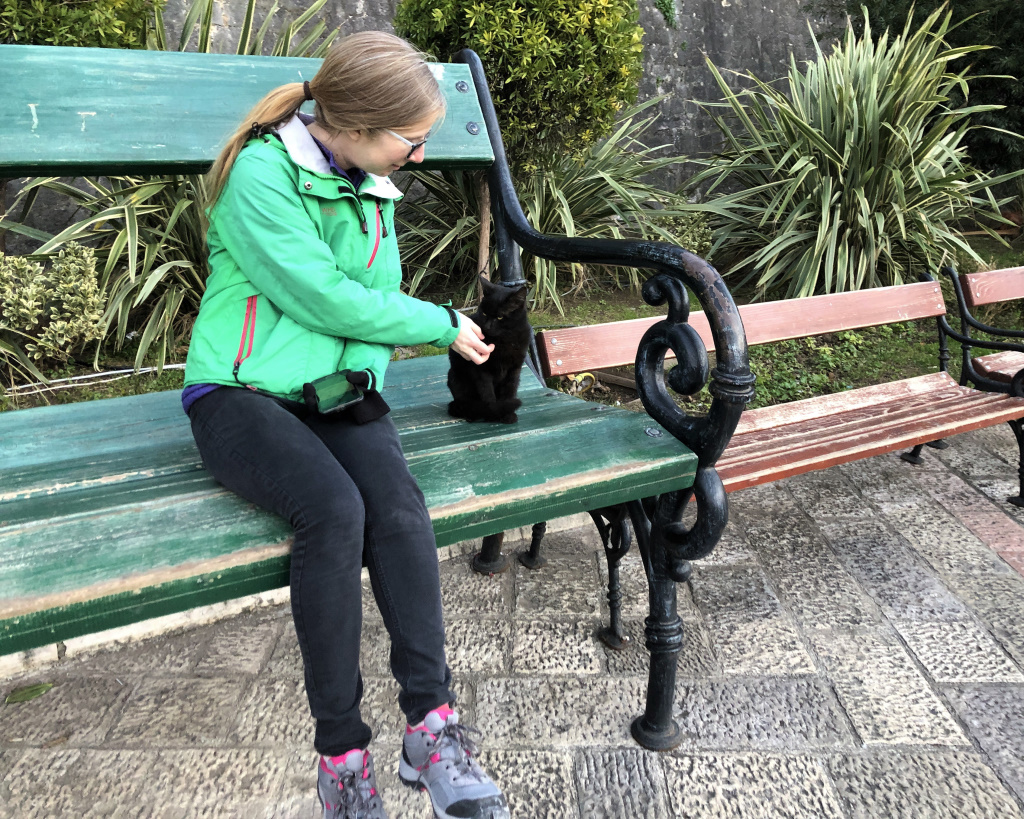 Fortunately, the city’s infamous cats are a year-round attraction. We need to take a moment (or several) to mention them. They’re everywhere. On window sills. In plazas. Eating treats. In large groups. Peeking out of abandoned buildings. By the beach. Adorably snoozing on reindeer. Most are fed and cared for by locals and donations. The cats know how good they have it. We met one on the path up to the fortress that jumped into Danielle’s lap the moment she knelt down. It was fine with being toted to the top…. where we discovered a pile of cat food awaiting it. We are guilty of bribing them for a little affection too. After all, cats can have a little salami, as a treat. 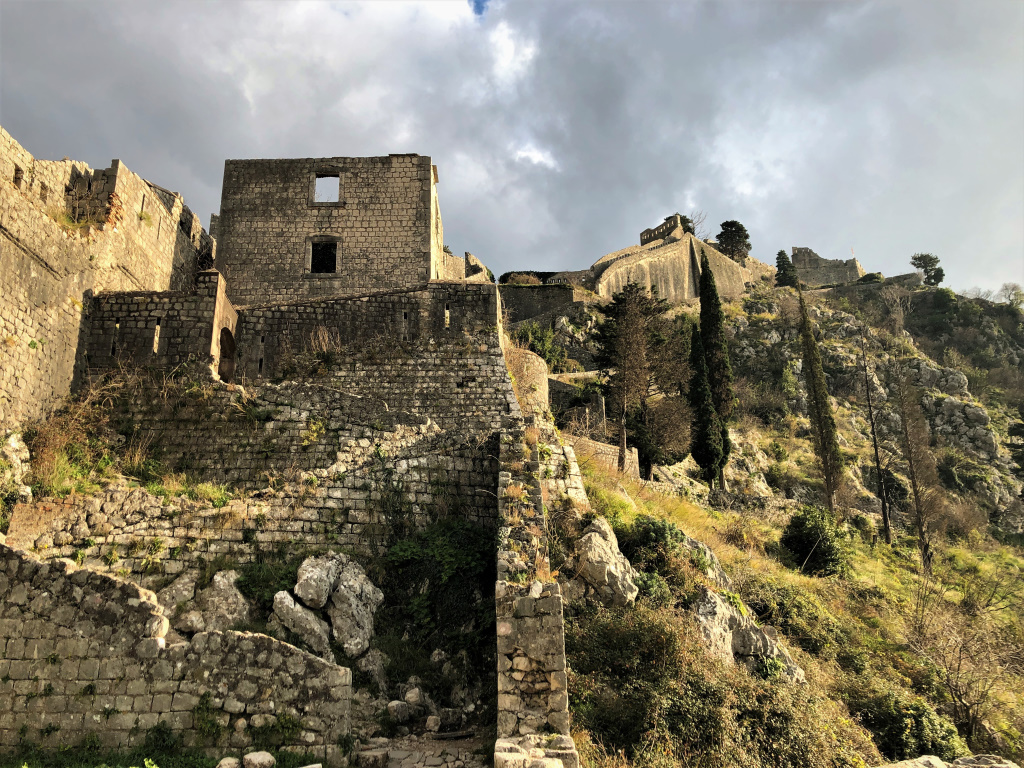 But there was more glamor to our stay than stray cats and gas station food. The crown jewel of Kotor is the stunning San Giovanni fortress. In the summer admission comes with a hefty charge, but during our stay the gates were wide open for anyone to climb and go as they pleased. And we did, as often as we could. There’s no better workout than climbing more than a thousand stairs to earn a commanding view of one of the world’s most beautiful settlements. 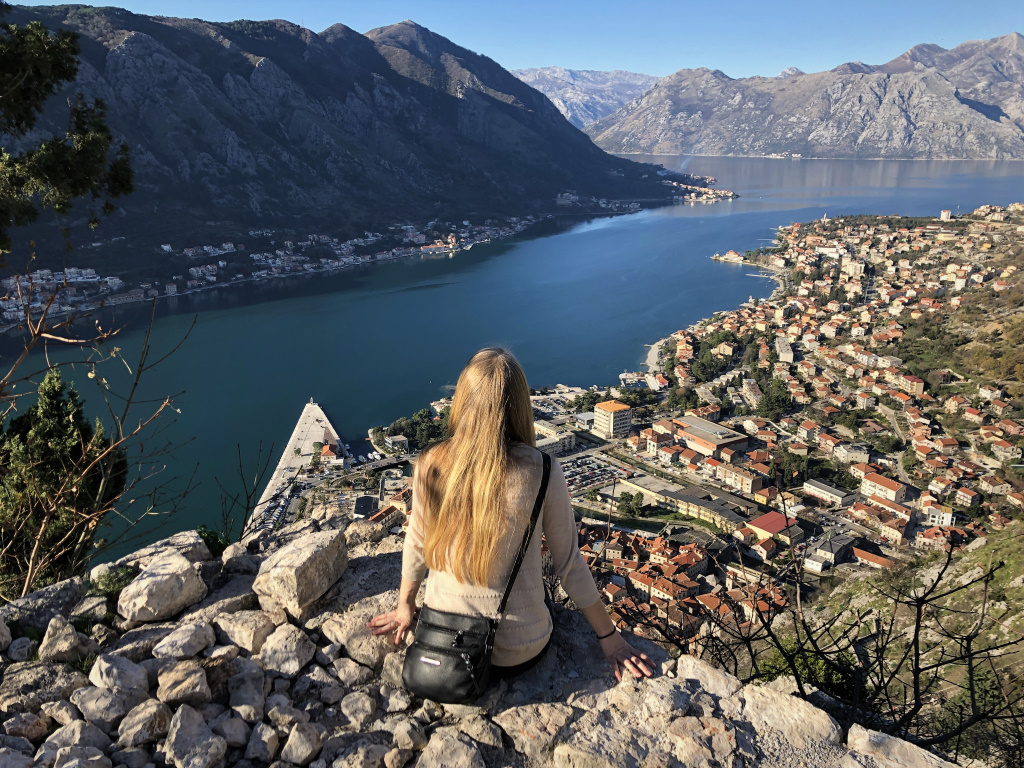 There are all kinds of Instagram-friendly spots to pose, most popularly at a church halfway up. A few sections are dangerous to go through (though we didn’t see the warnings signs til too late). A well-placed ladder by a low window serves as back entrance to the fortress in winter. In summer this way in is patrolled, but we were free to use it to pop out and explore the nearby mountain road. Ascending through the fort and returning to town through the ruins and switchbacks behind it made for a good and varied hiking loop. 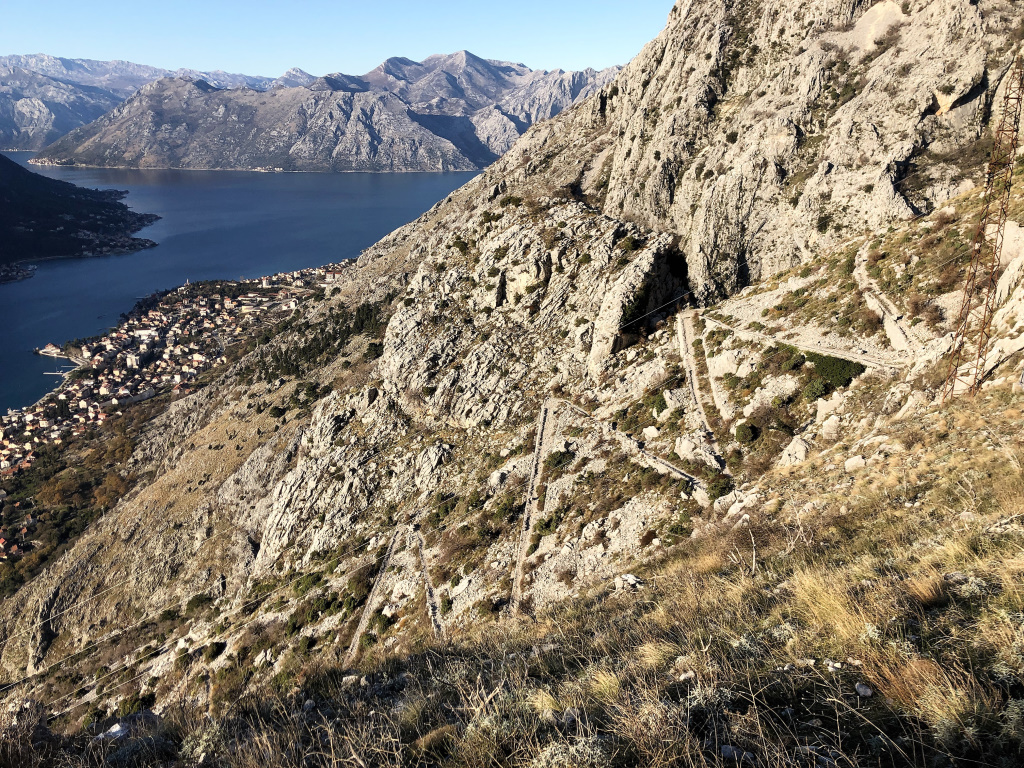 Those switchbacks also climb far above the castle. This path is called the Ladder of Kotor, and naturally we hiked it, though we waited until after a rare rain. January’s weather had stayed oddly consistent and windless, letting woodstove smoke linger and keeping visibility poor. But the vistas were enchanting when the air was freshly-scrubbed. The zig-zag path up the mountainside used to be the main road into the interior. Before highways, farmers used to haul produce down to the city along it. We don’t envy them.

These days people climb it mostly for the views. After two hours of steep upward climb, we crested the walls of our sheltered fjord. The Adriatic Sea popped into sight to our west. 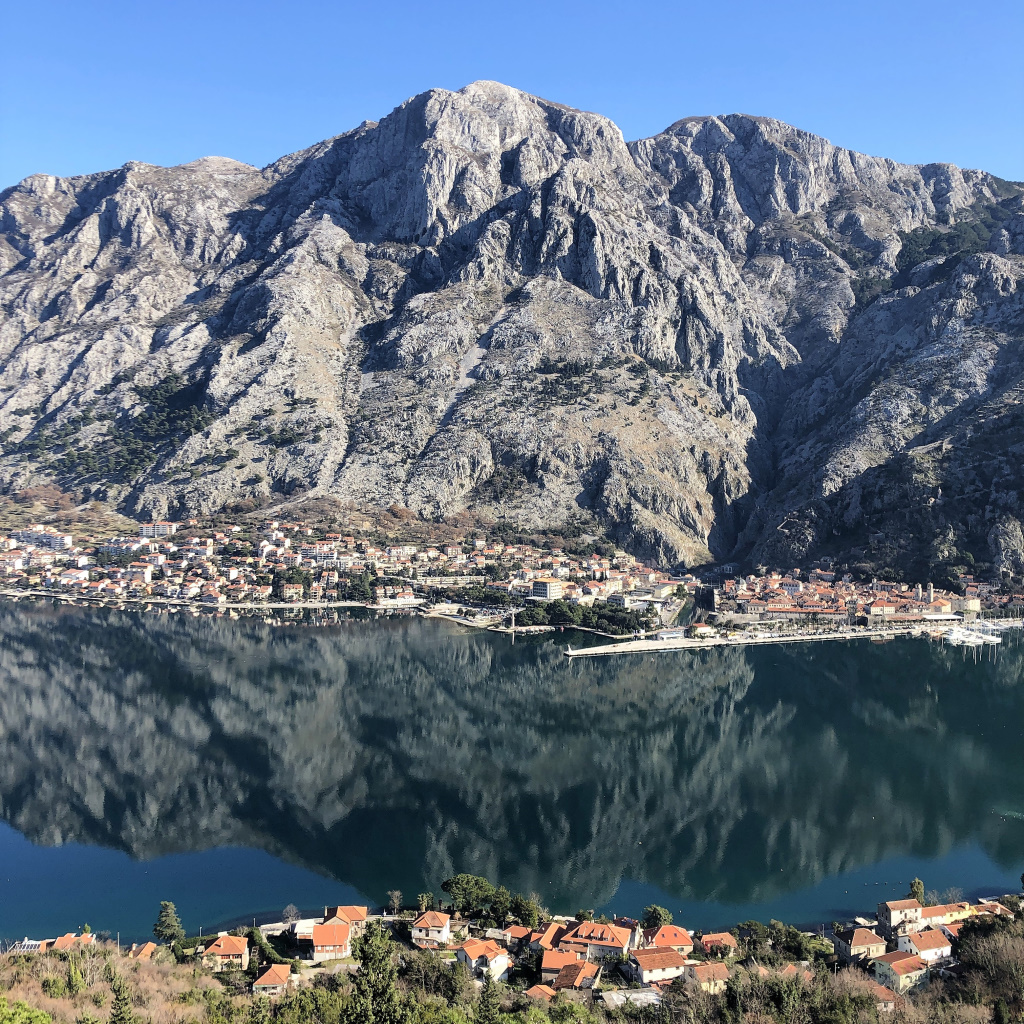 Above our house, Vrmac Ridge is covered in trails, plenty of options for any flavor of hike. We opted to trek clear across it to the nearby town of Tivat. We walked a short stretch of the P22 highway near our apartment to find the uphill path. (Beware of gearheads trying to drift the hairpin turns.) Free tourist maps of Vrmac were mostly accurate, but trails on the Tivat side are mazelike and mostly unsigned. 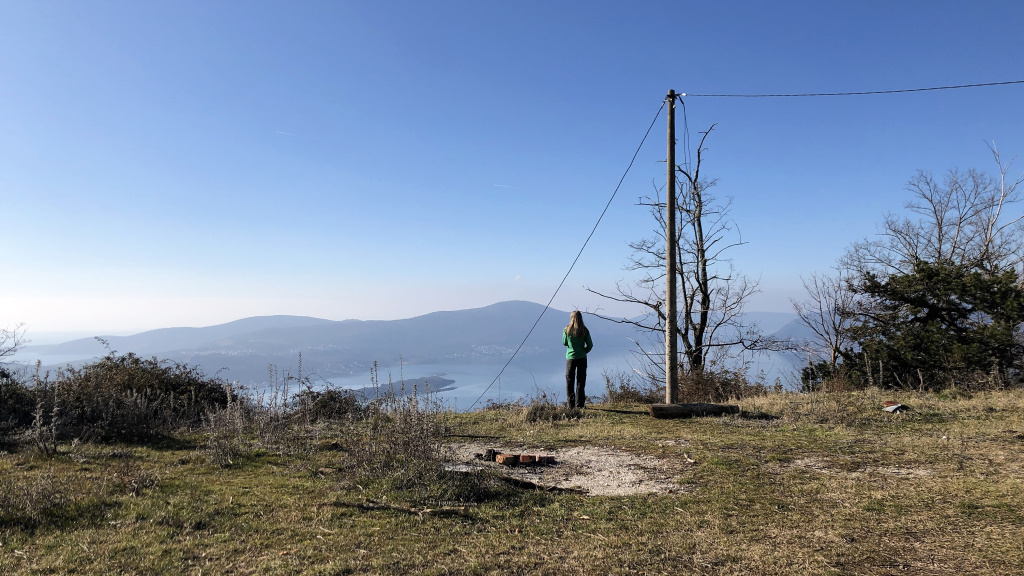 At first we were shaded by pine trees and followed by curious cattle. At the top are a group of abandoned military buildings. The eldest among them is a stone Austro-Hungarian fort that saw action in WWI. From a grassy lawn nearby we watched planes take off and land at Tivat’s own small airport. 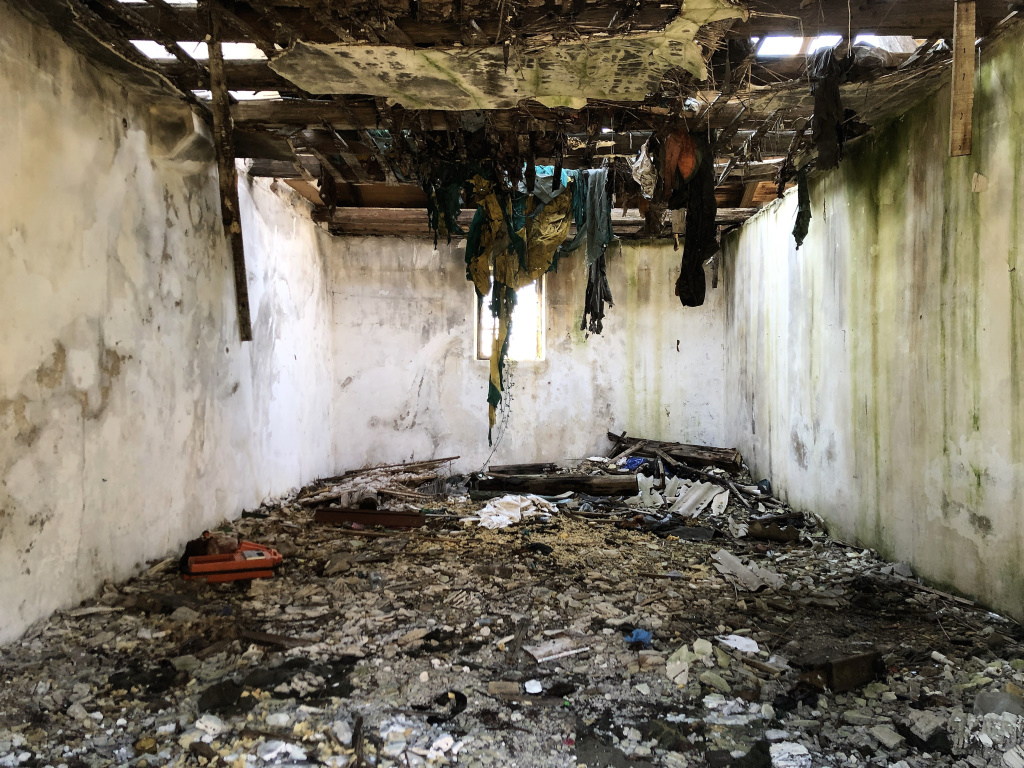 The other ruins are from the Yugoslav era. Rotting paperwork and uniforms litter the floors. It’s all a bit eerie, even post-apocalyptic. But the local cattle clearly marked the messy structures as their territory, so we trod carefully. 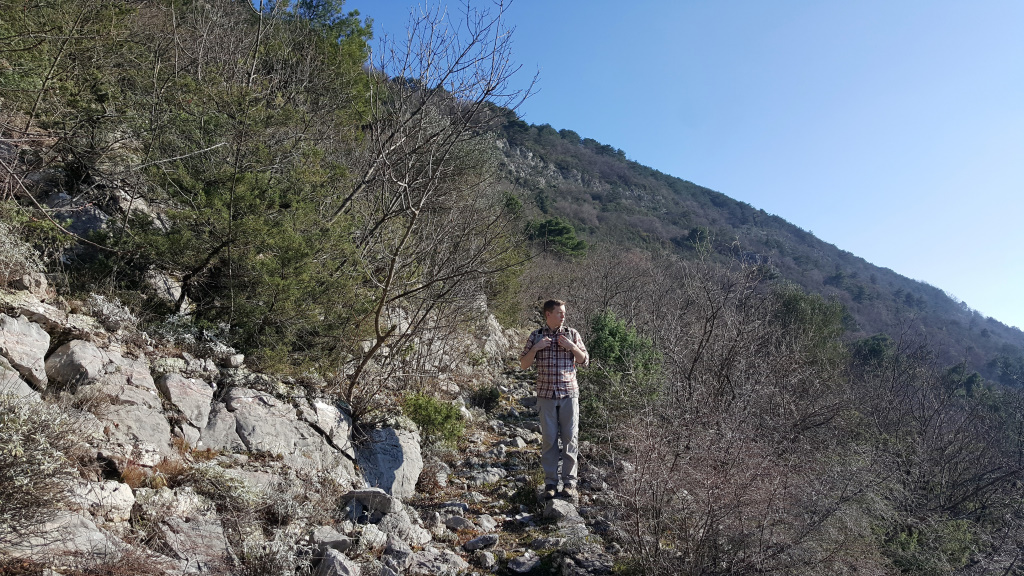 Long stretches of the routes down to Tivat were overgrown, even in winter. A large percentage of the trailside plants were of the spiny variety. Long pants and sleeves are a necessity. In a few places cattle wallows overshadowed the “real” trail and almost led us astray. But even with the backtracking and scratches, it was a great hike. We ended with burgers and beers at The Black Sheep in Tivat. 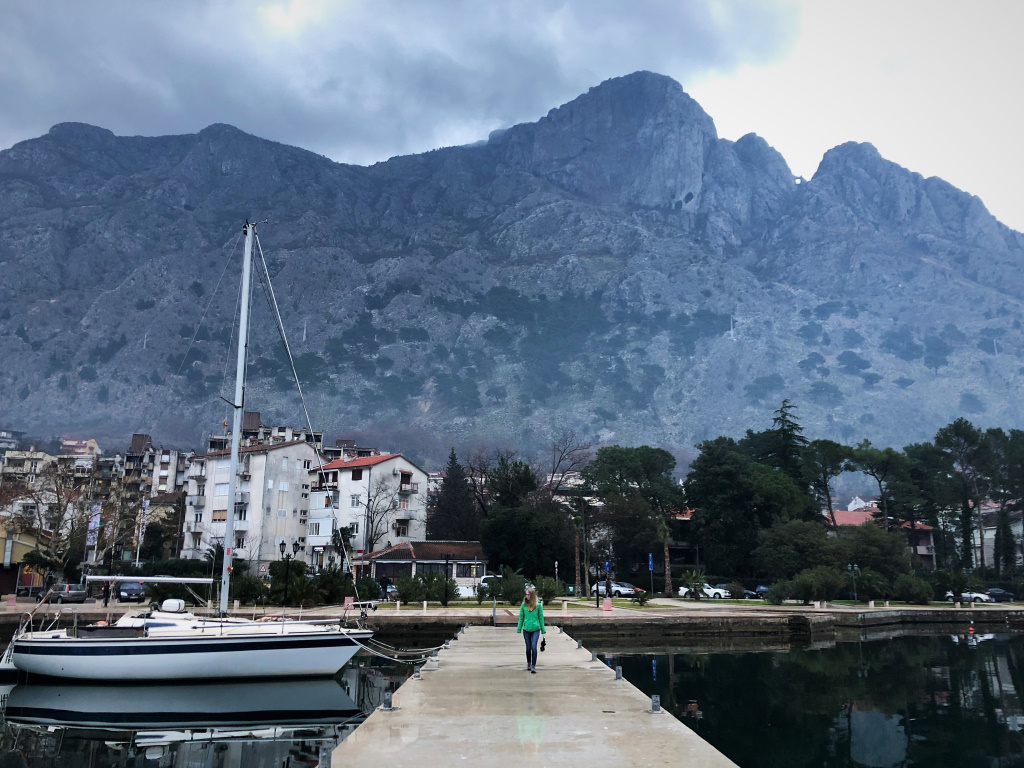 When we didn’t feel like dealing with elevation gain, we walked along the bay. There are a few good sections of waterfront boardwalk and a couple stony beaches. The stretch from the Old Town to Dobrota was the best place to sit at the edge of a pier or get a coffee within sight of the water. 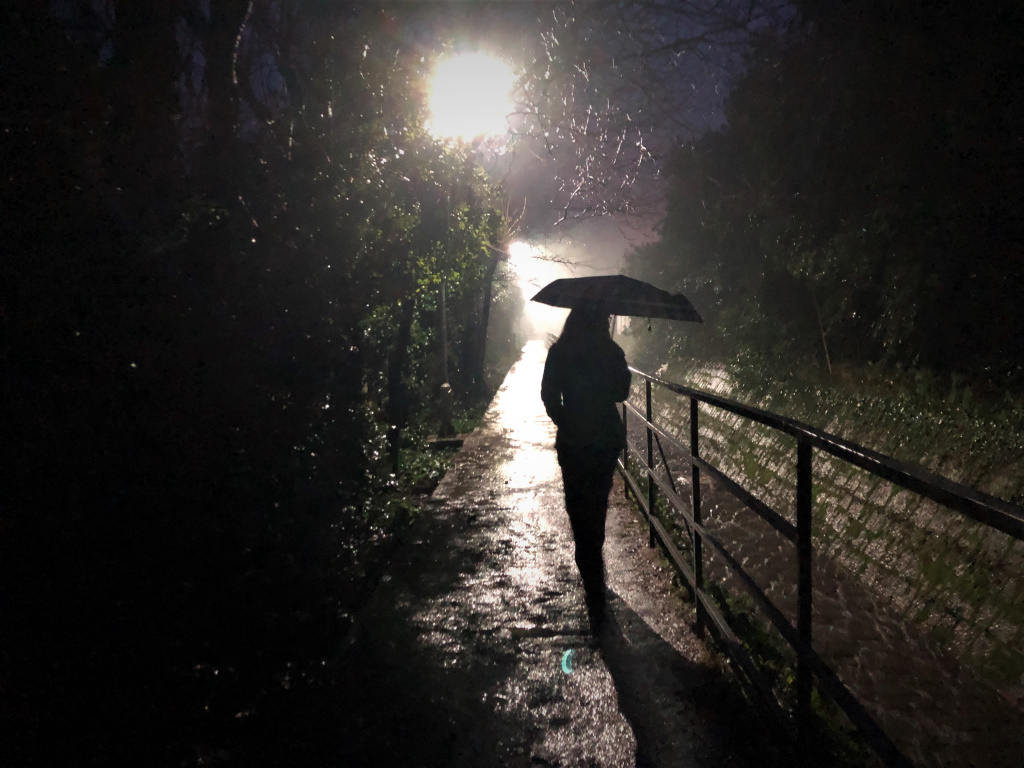 We loved our lazy strolls and occasional strenuous hikes. After several months in sometimes-overwhelming cities, quiet and sheltered Kotor was the perfect opportunity to rest and regroup ahead of whatever challenges the new year would bring.