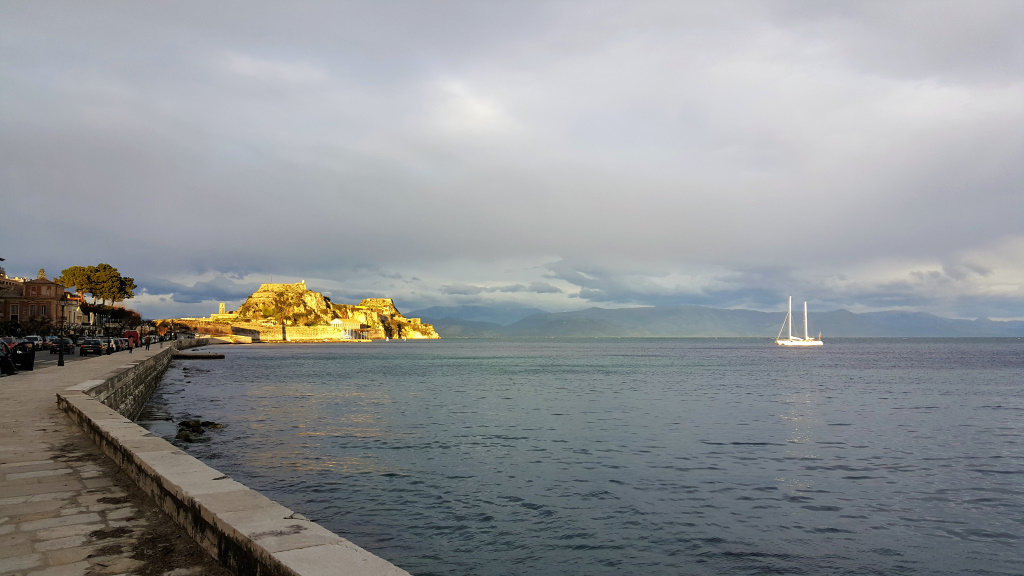 Corfu was where we finally got our first taste of Greece. It’s a light appetizer if there ever was one. There’s no Acropolis looming over the population, nor whitewashed towns so popular on Santorini or Mykonos. The vibe here was more unassuming than that. An island tucked away in the far northwest corner of the country, it has a convoluted history floating between different empires: Hellenic, Roman, Venetian, French, Ottoman, and British. It’s a place that feels both timeless and transient, where the “new” fortress is ~450 years old… but that was 5 empires ago.

One thing is for sure – Corfu rescued us from Sarandë↗. And for that, we are eternally grateful. 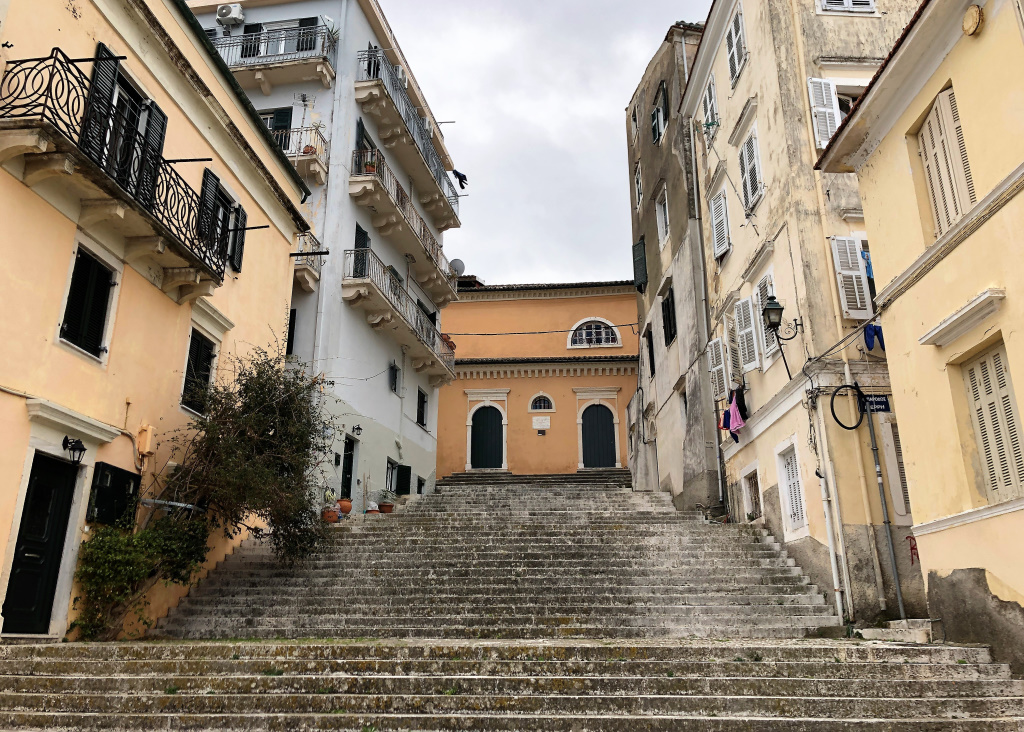 With a week until our onward flight we enjoyed the last sips of (luke)warm Mediterranean winter. Our compact Airbnb↗ sat in the shadow of the New Fortress, and was only a short walk to the Old. A decent grocer downstairs supplied fresh and frozen veggies, and just-caught fish were available in the nearby market. So much better than the options in Sarandë. More restaurants were open, even in the low season. We had remarkably tasty thin-crust pizza at Pizzeria a mano. The local drinking delicacy, a radioactive-orange and saccharine sweet kumquat liqueur, was less impressive. 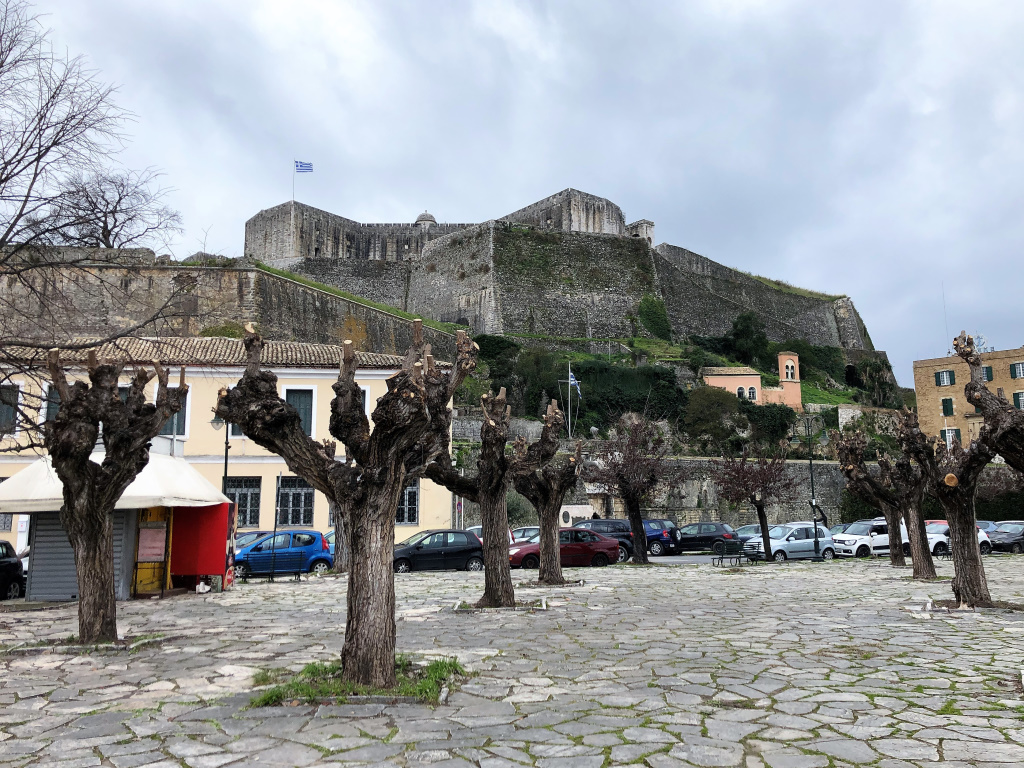 Like Kotor↗ and Dubrovnik↗, and other cities along the Adriatic, Corfu shares a common vibe from Venetian rule. The two huge Venetian fortresses for instance dominate the town’s tourist brochures. Disappointingly the New Fortress was closed for renovation work, but we appreciated its imposing presence and enjoyed taking shortcuts through its tunnels to shorten our walk to the market. 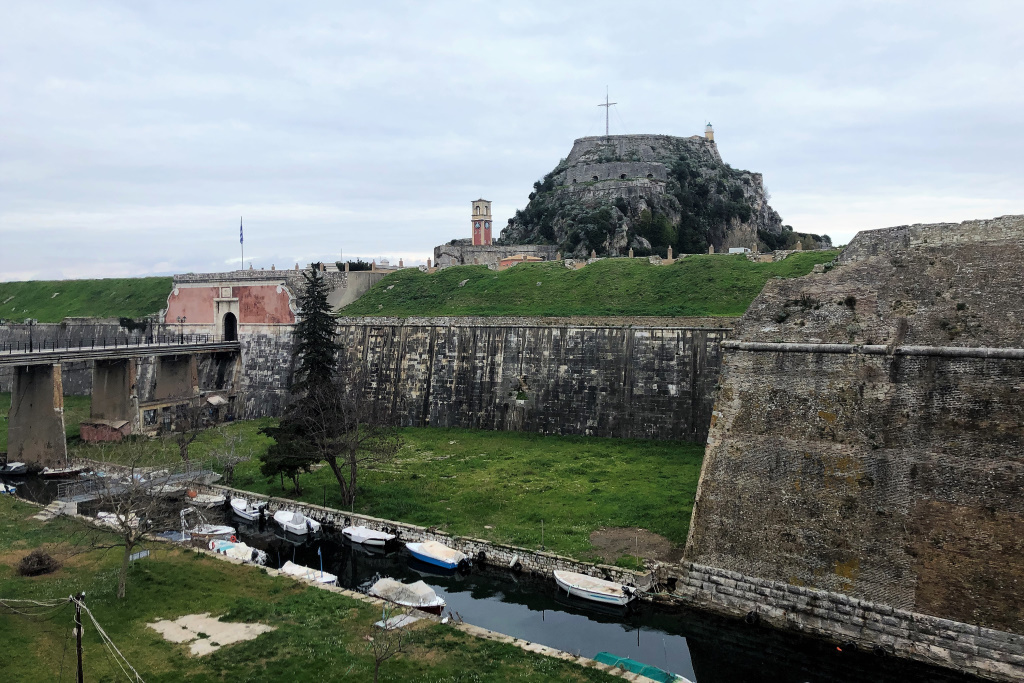 The Old Fortress, on a small peninsula by the city center, was one of the best places for a stroll. Entry was free for winter. Among its tenants is a university music department, and we caught snippets of occasional piano and opera practice. A couple museum rooms exhibited small finds like mosaics and carvings. 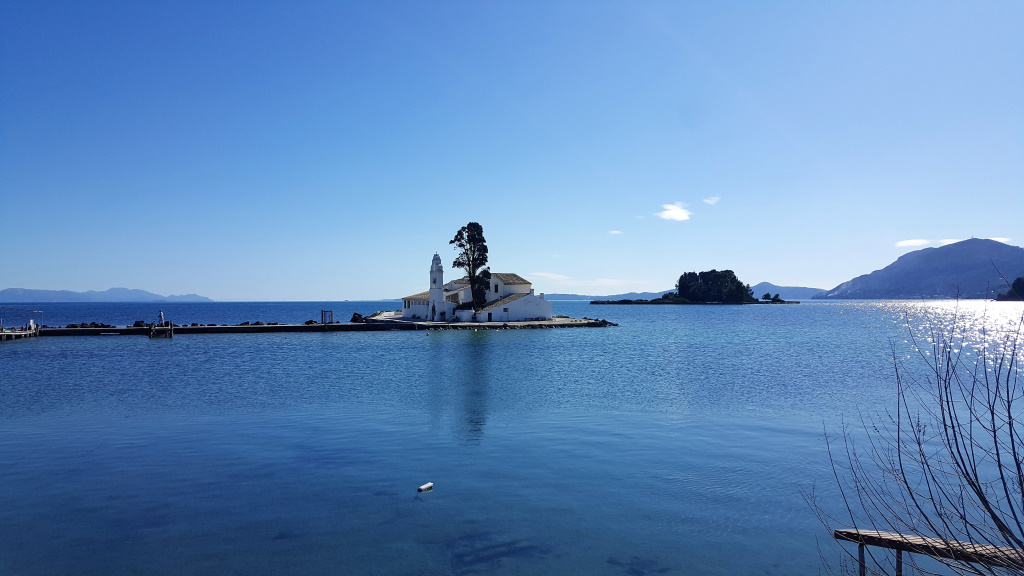 Across town, a popular spot to hang out is on the periphery of Corfu’s airport. The runway juts precipitously into a lagoon, sheltered by a concrete breakwater just a stone’s throw from the tarmac. Locals use it for fishing and as an ad hoc Vespa bridge. It’s also a fabulous spot for plane watching. Winter only sees a couple flights in and out each day, so careful scheduling is required – don’t just show up expecting a show. On our first visit we ran behind schedule and barely arrived in time to see a smaller propeller plane set down. Instead we had to content ourselves with the peaceful vista of Vlacherna Monastery just offshore.

Our next visit was much more successful. We timed our walk to cross paths with an Airbus A320 arriving from Athens, and came plenty early as insurance. Too early – we began to wonder if it was coming at all. But eventually a speck appeared in the distance, approaching achingly slowly. Our excitement grew along with its silhouette. Then, in no time at all, the jet roared right over our heads. Talk about LOUD! The engine wash reached us several seconds after the plane settled to earth, already half a kilometer distant.

Turnaround was quick on the schedule, so we stuck around to enjoy the sequel. Takeoff was much steeper. By the time the plane was overhead, it was already too high to really feel. Still fun, but a far cry from the mind-blowing landing. 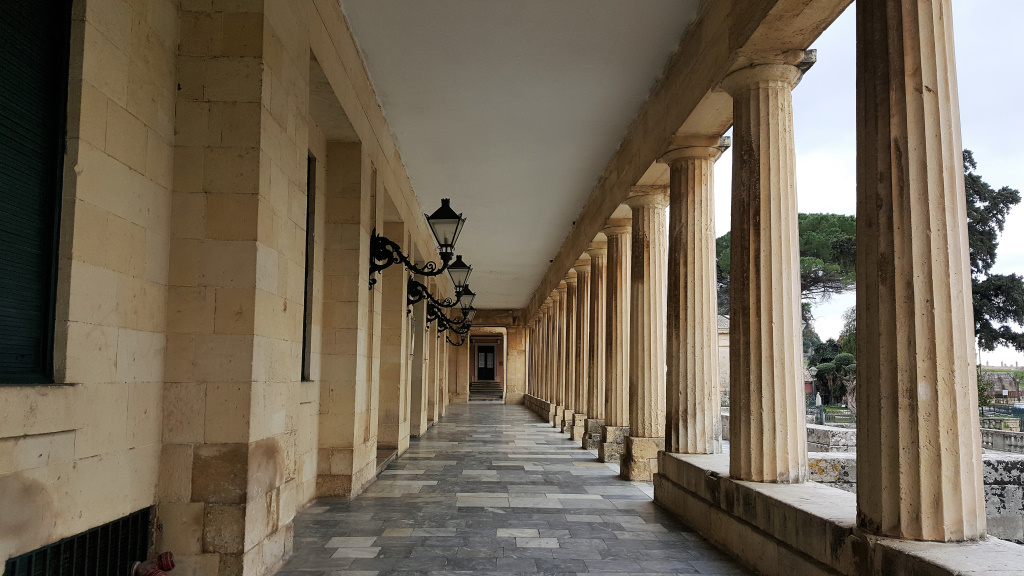 Overall it was a quiet week. The unexpected changes to our itinerary, skipping out on Sarandë and yeeting ourselves to Yerevan, gave us this odd grace period in Greece. It wasn’t planned, but we treated it as a vacation, happy to have somewhere we could enjoy a few days of peace and mild weather. 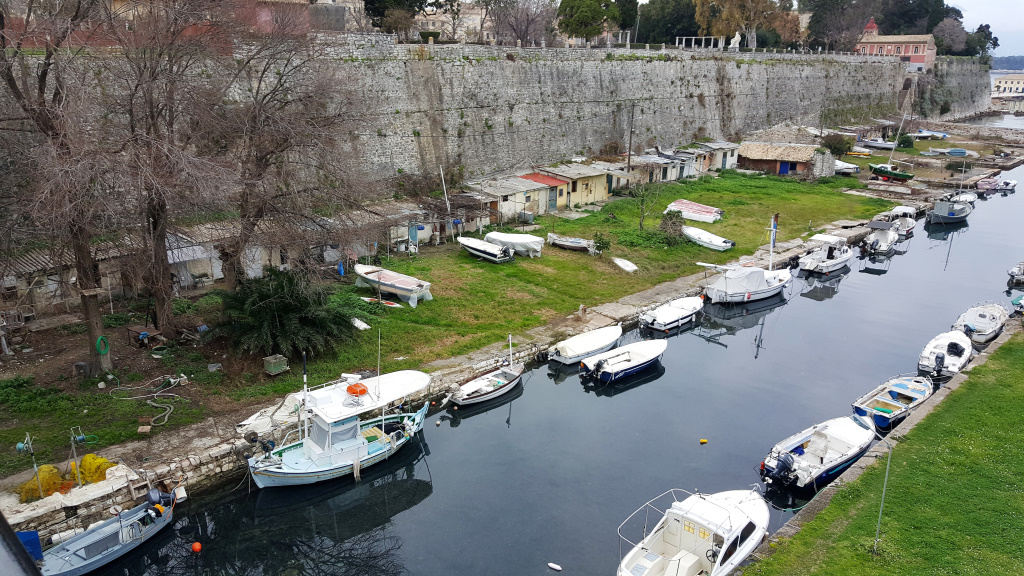 The offseason flight schedule left us with an aching 8-hour layover in Athens. Possibly enough time to see the Acropolis, if we rushed it. But given the pricy transit and potential for rush-hour congestion, we settled for a visited the airport museum and the wine bar just across the street. Anyway, we liked what we’d seen and would be back someday to see it proper.

Soon enough we’d be in Armenia, plunged back into winter. Corfu, at least, left a warm impression of southern Europe.