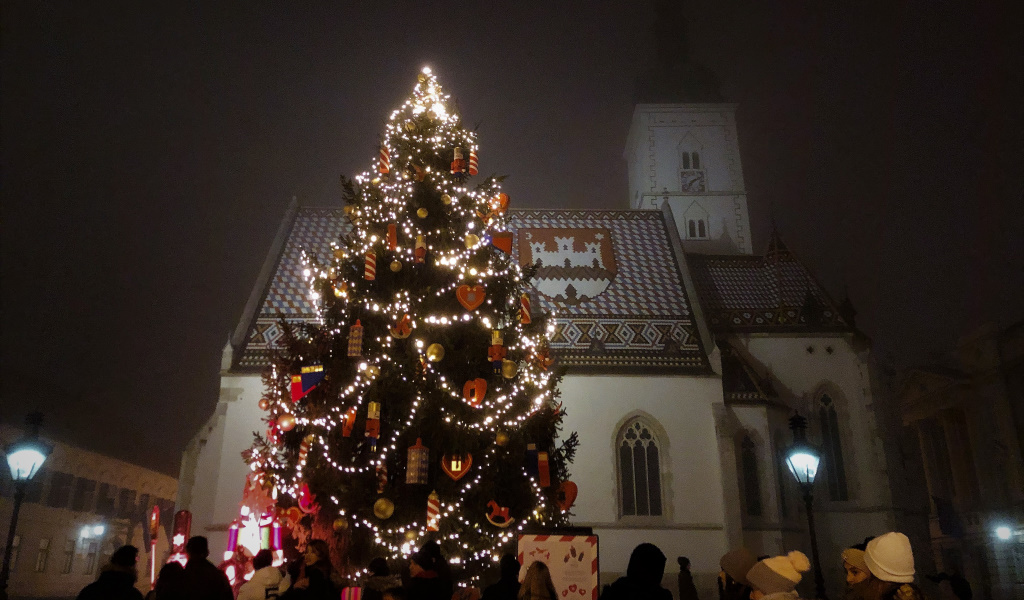 Cue the season for Christmas markets! Zagreb’s consistently rank as the best in Europe – this year they weren’t even allowed in the contest because they’d won too many times. During our first visit to Zagreb two years ago, we watched with great anticipation as Advent market stalls were brought in, lights went up, and an ice rink was assembled. And then we promptly left just after it all opened. We weren’t making that mistake again! This time we were going to fully experience the Christmas season. Judging by the size of the crowd, others had the same thought. Word’s clearly gotten out. 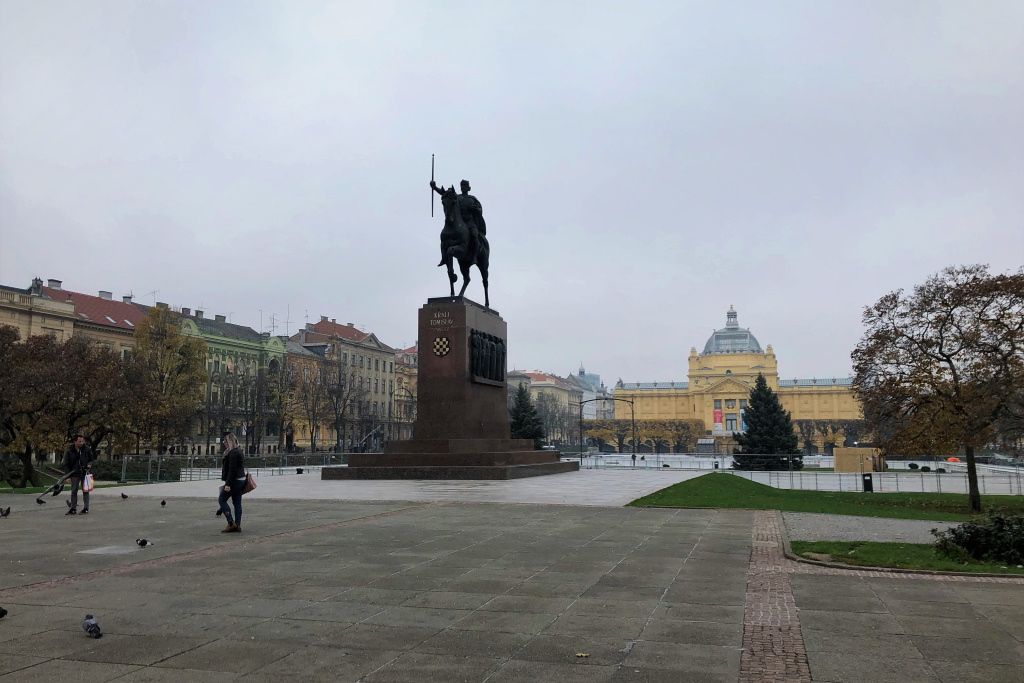 We arrived from Rijeka by train. Zagreb’s main station is just across the street from King Tomislav Square, home to the seasonal ice rink. Since we stayed at the same Airbnb↗ as the first time (a good experience repeated with only partial success; the apartment above us was renovating), we could walk to our apartment from the station. 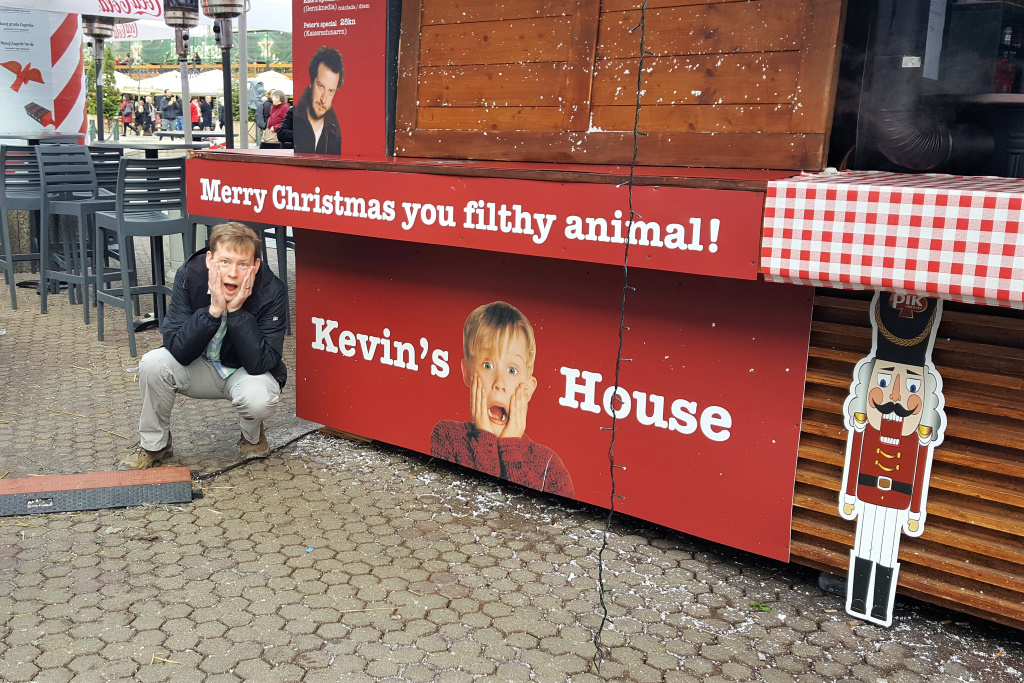 Naturally one of the first things we did was head out to find dinner. But where to start looking? The seasonal markets spread out over half a dozen squares. The space around Ban Jelačić Square holds the largest group and an Advent wreath. Others nestle near the National Theatre, the ice rink, and along the edge of the upper town. At every turn were copious amounts of mulled wine and sausages. But the attempt at a Chicago-style hotdog was less than authentic… or satisfying. Fortunately at Dolac Market we could get burek from Börek.  Cheese or meat filled phyllo dough never tasted so good. 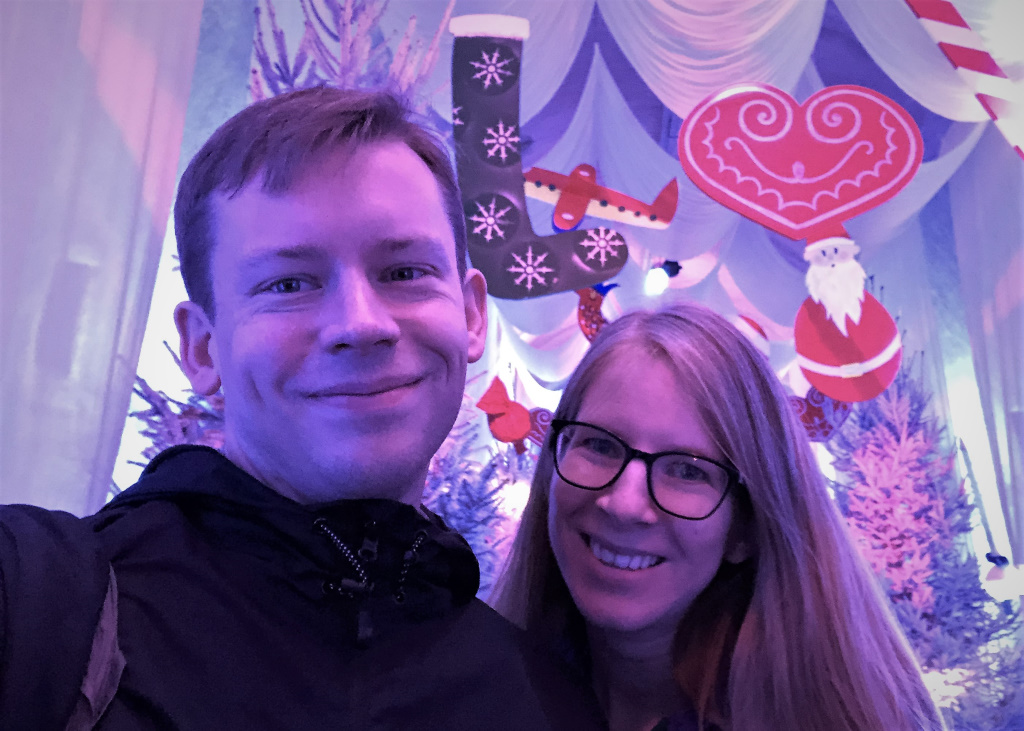 Festivities continued underneath the city. Inside the Grič Tunnel we found a winter wonderland of scenes and lights. The tunnel was originally built to be a bomb shelter, just like one in Rijeka↗. Thankfully we live in safer times. 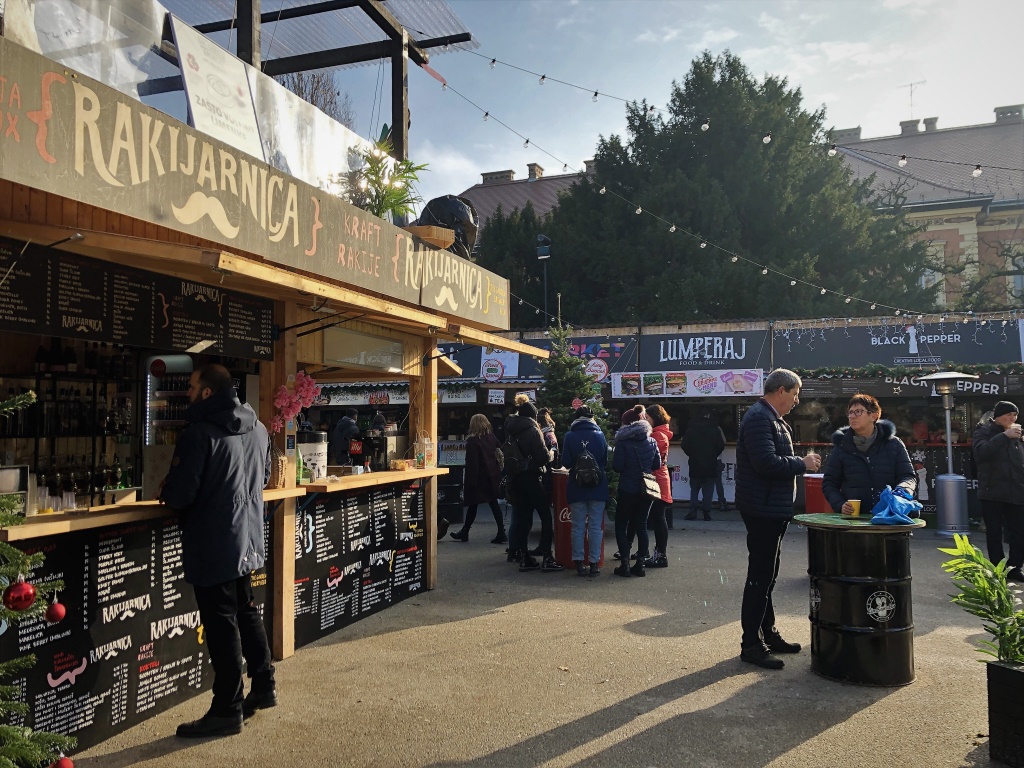 The hipster/foodie Christmas market is set up in Strossmayer Park. This was the spot for lamb burgers, craft beers and live music. One booth even served up pastel de natas of Lisbon↗ fame. 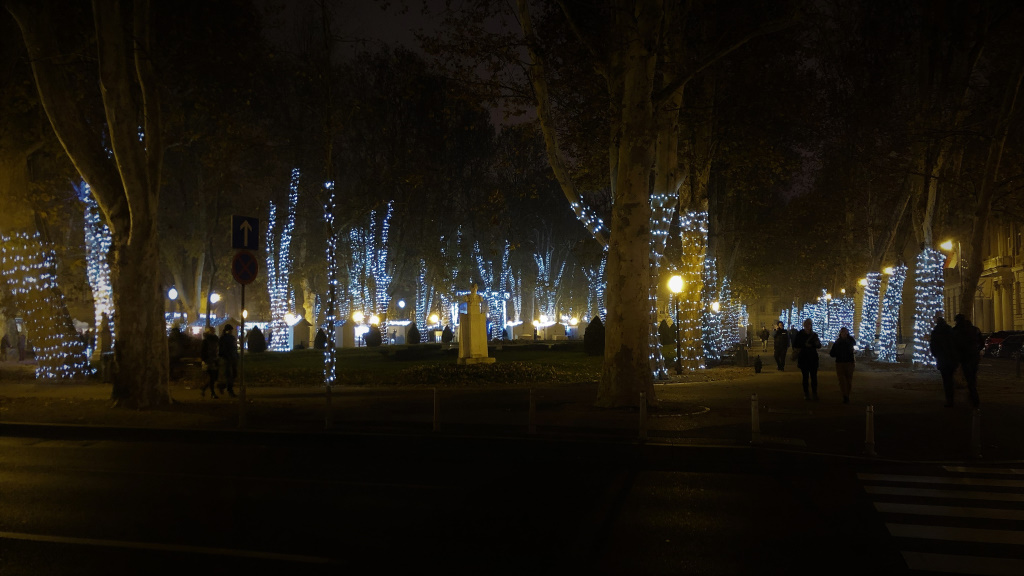 Of course, there were lights and decorations to go along with the markets. Our favorites were in Zrinjevac Park. Though December wasn’t snowy, some nights had a low mist that made the lit-up trees feel even more magical. 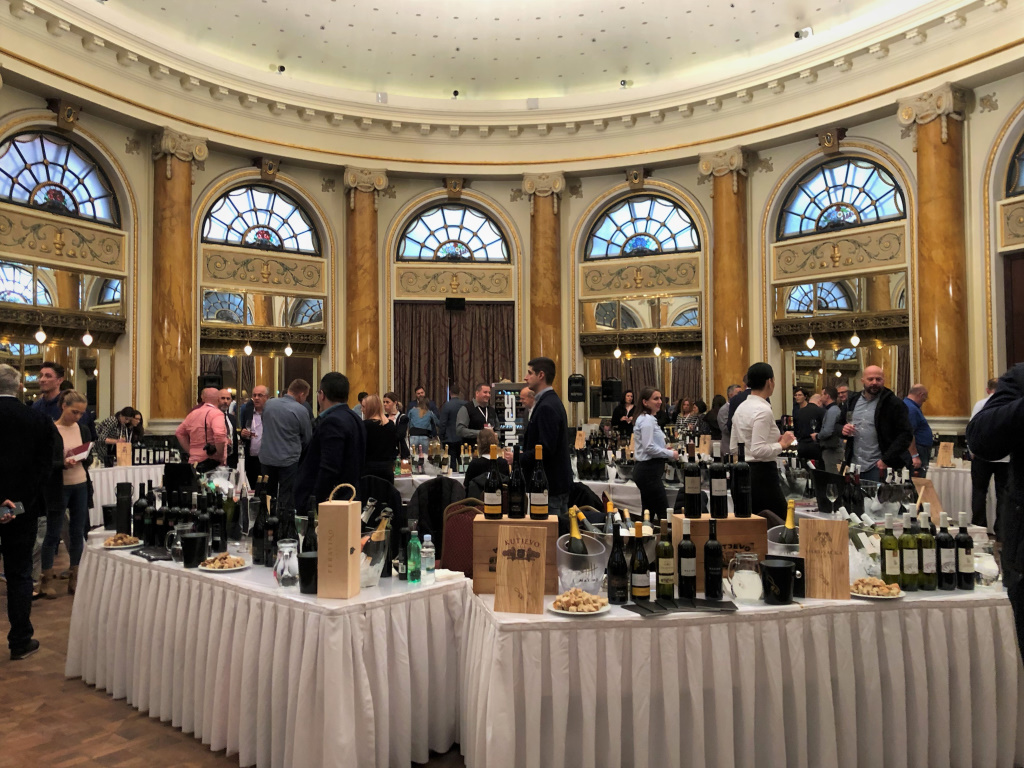 In addition to the Advent markets, we may or may not have planned our trip to coincide with VINOcom, aka the International Festival of Wine and Culinary Art. Despite the name, the culinary portion ended up being just a handful of samples. Compare that to 150+ wineries pouring from multiple bottles each. Did I mention the ticket bought unlimited wine tasting? There’s no better place to taste wine from every Croatian region and beyond. One of our favorites this year was a dessert wine from Austria. But we also loved sampling more unique local varietals like plavac mali, debit, babić, and boganduša. 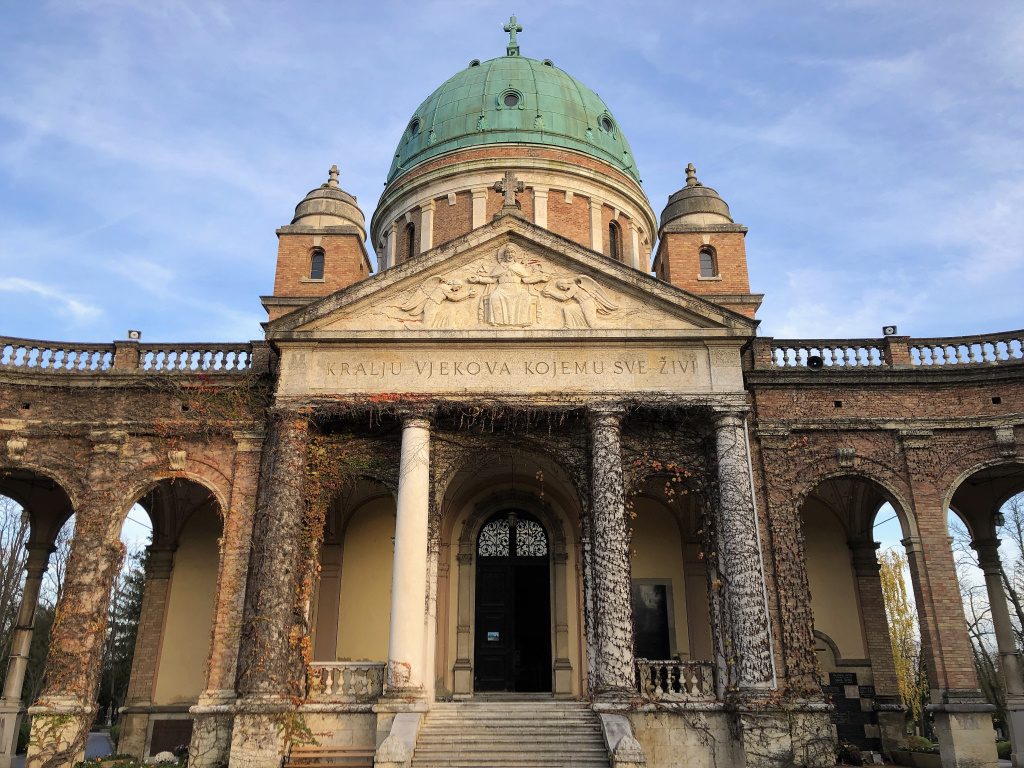 For a quiet afternoon of walking away from holiday crowds, we went up to Mirogoj Cemetery. Its main gate is set into a long and graceful wall of domes and arches. 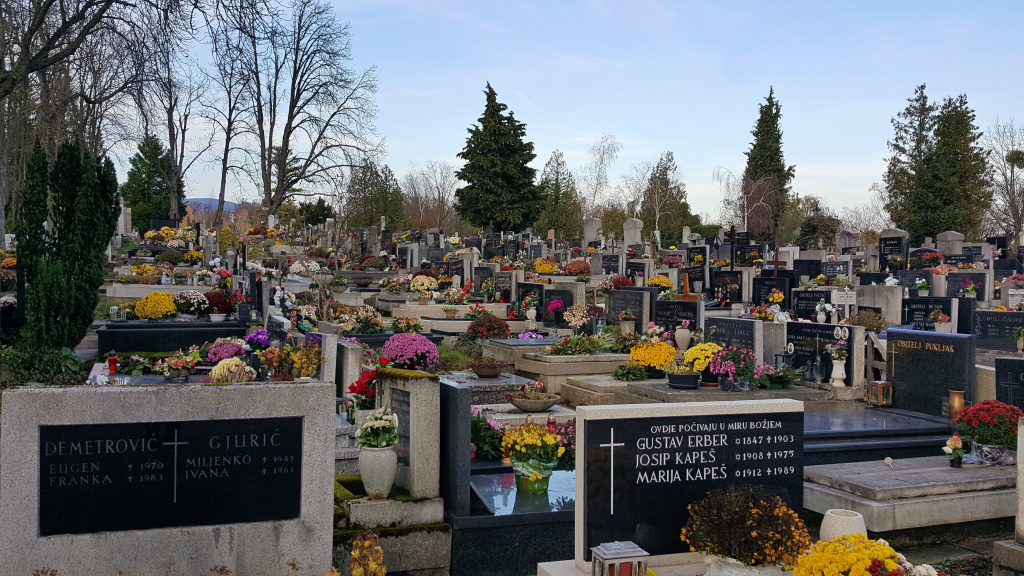 Inside the walls are tens of thousands of graves. Among them Croatia’s most famous artists and politicians rest. But every burial seemed well-cared for. Bouquets and vases of flowers and burning candles made it clear that families visit regularly. More somber memorials, like one to victims of the Homeland War, are more often bedecked with wreaths. 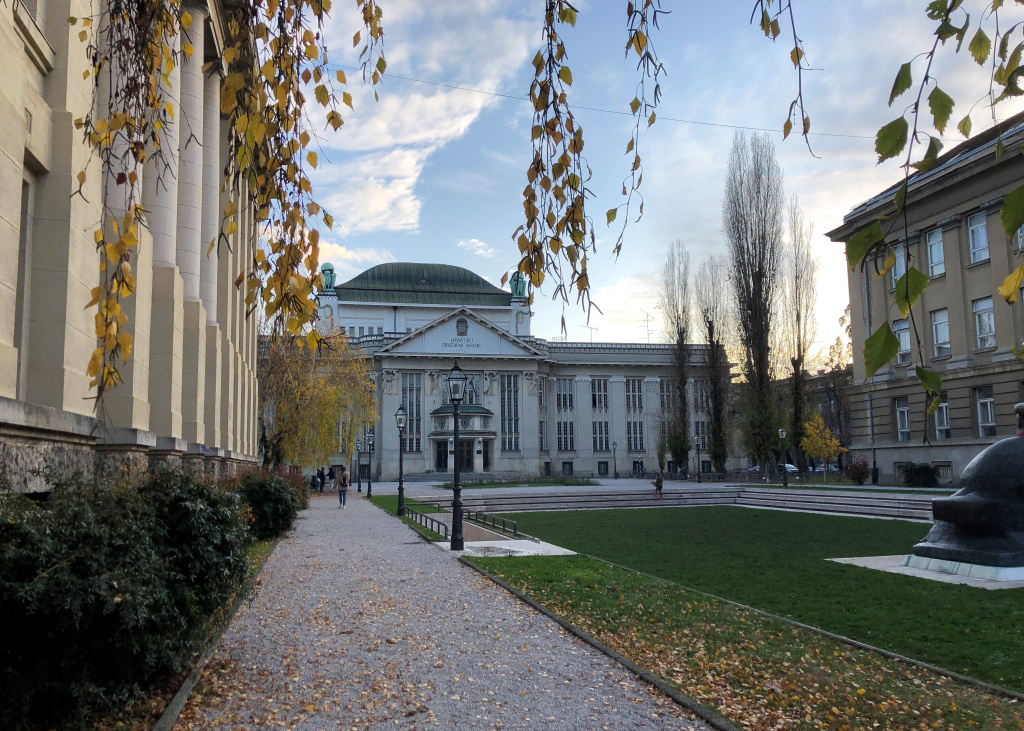 Walking around the center is a treat too. It’s hard to beat old Austro-Hungarian architecture. St. Mark’s Square is always a highlight in the upper town. The impressive State Archives came in handy for some extra exploration of family histories. The only thing more captivating were the grand windows and frescoed walls that contain them. 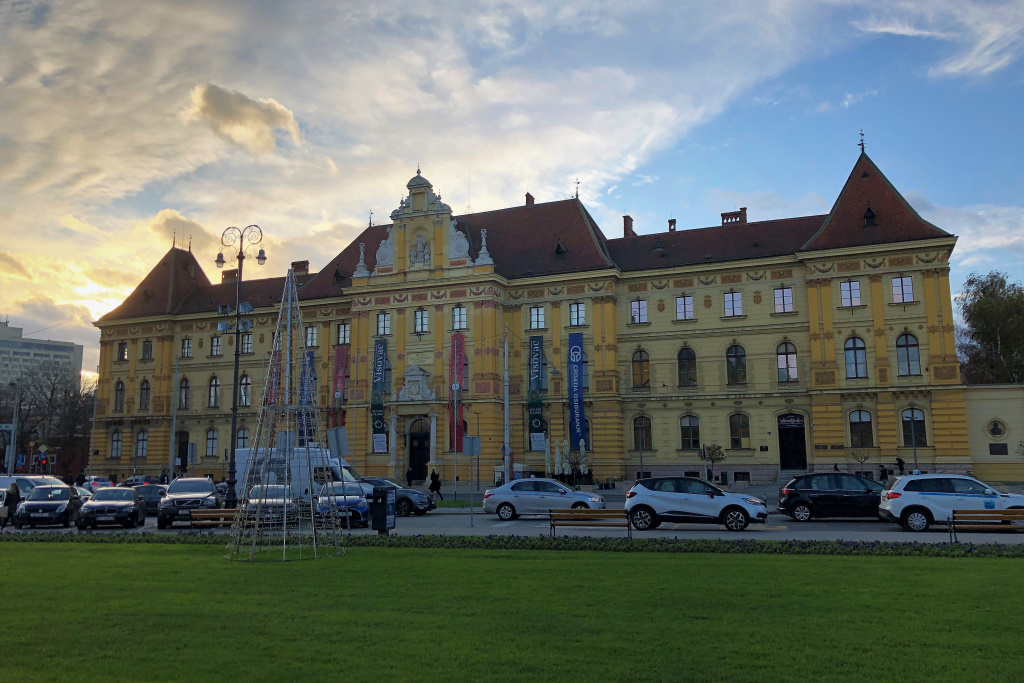 Like many other Croatian cities, Zagreb loves yellow. Whoever decided on the color scheme nailed it. Though we will admit that bathed in Christmas red, some buildings looked more evil than festive. 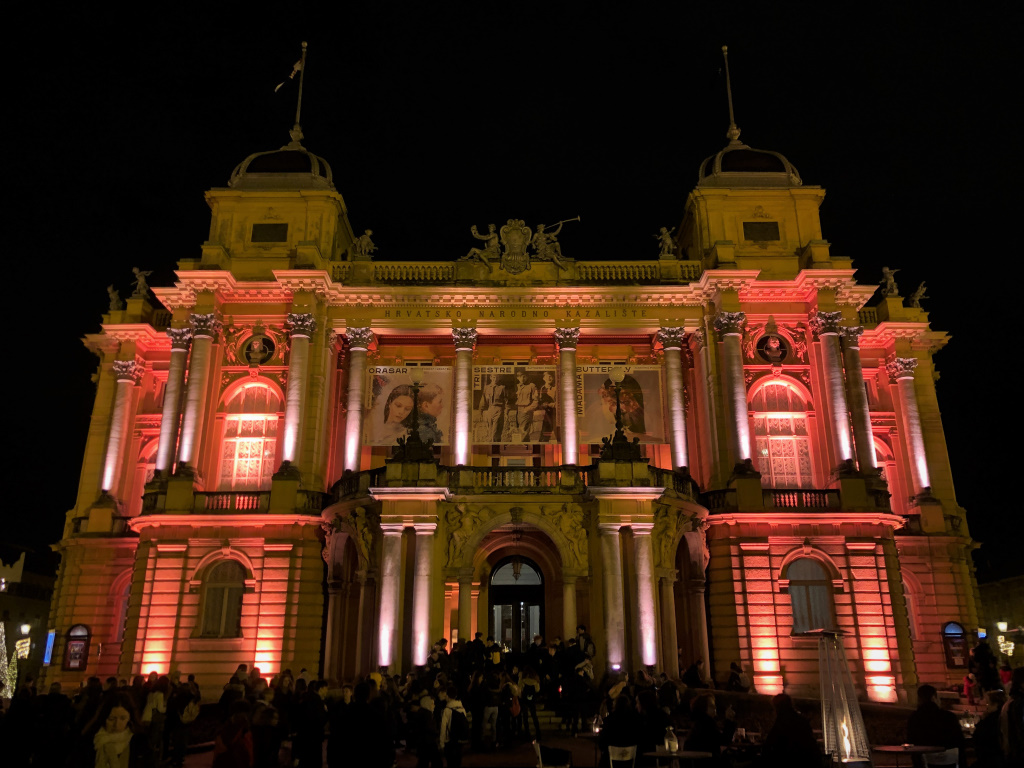 Others structures are stately in their starkness. Case in point is the Cathedral. An earthquake would damage its towering spires in May 2020, but when we saw them, they still had their full height. 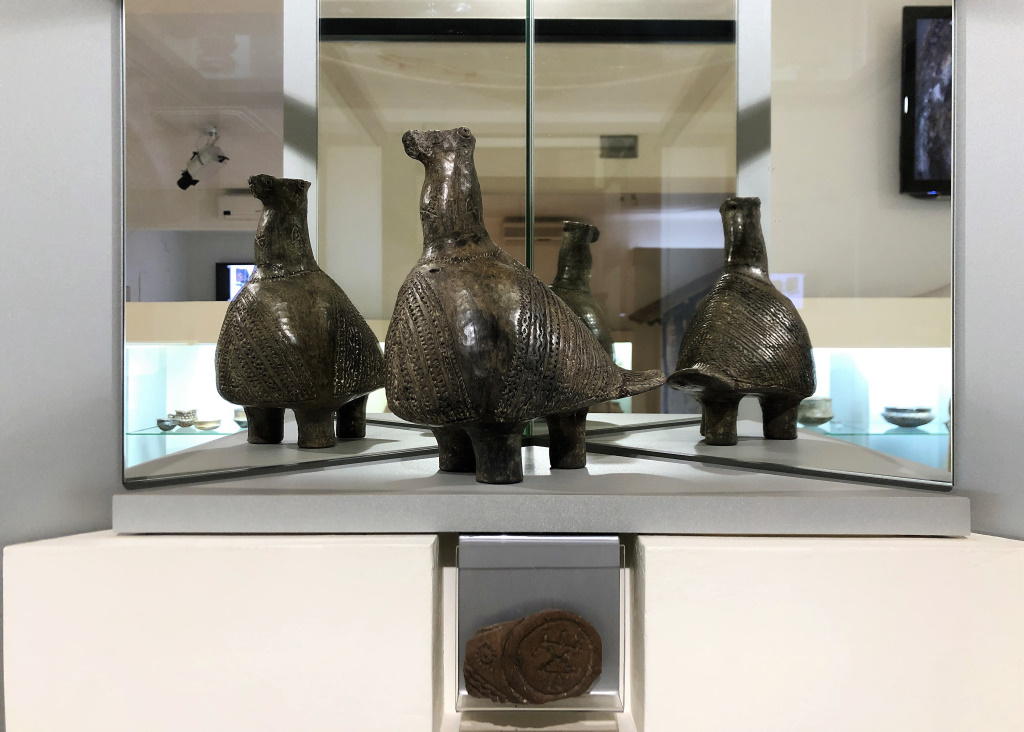 The Archaeology Museum may be the best one in the city. One of its treasures is the Vučedol Dove. It may not be the most dramatic sculpture, but it makes up for it by being nearly 5,000 years old. It’s hard not to look at some of these artifacts and think the ancients must have had a sense of humor. Sometimes even an NSFW one. 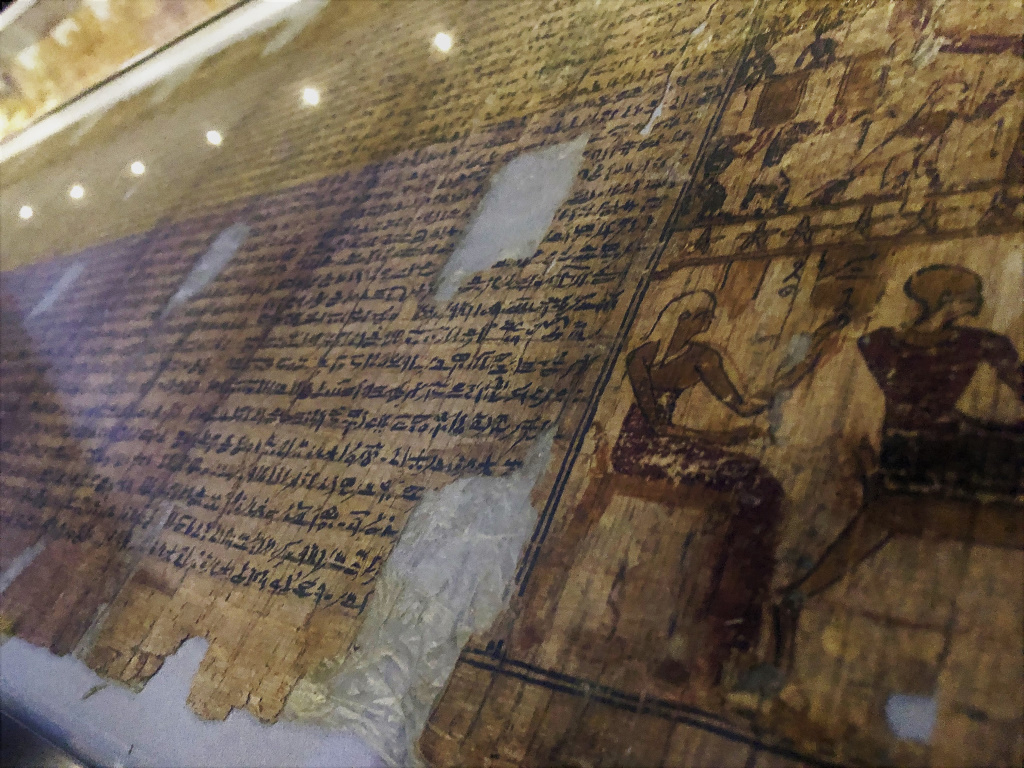 The museum also surprises with a large Egyptian collection. Books of the Dead are written and illustrated on delicate papyri. Sarcophagi and sacred artifacts abound. The collection rivals that of much larger institutions like the British Museum. Not in quantity of course, but easier to appreciate without fighting the crowds. 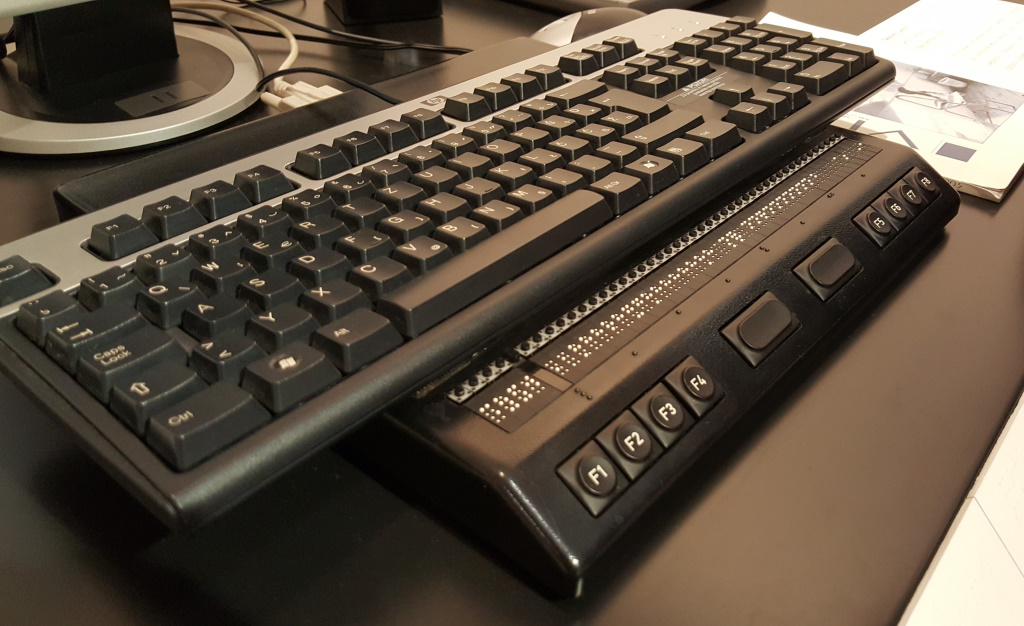 The Typhlological Museum has a more humble mission: highlighting the experiences of the blind. It tells the story of development and advances in blind education and technology in Croatia and around the world. Part of the space was a blacked-out room so sighted people can attempt to navigate sans vision. It was surprisingly difficult! One of their most interesting artifacts was a physical screen reader for computers. As the user scrolls through a document or webpage, a line of tiny pins form the words in Braille. 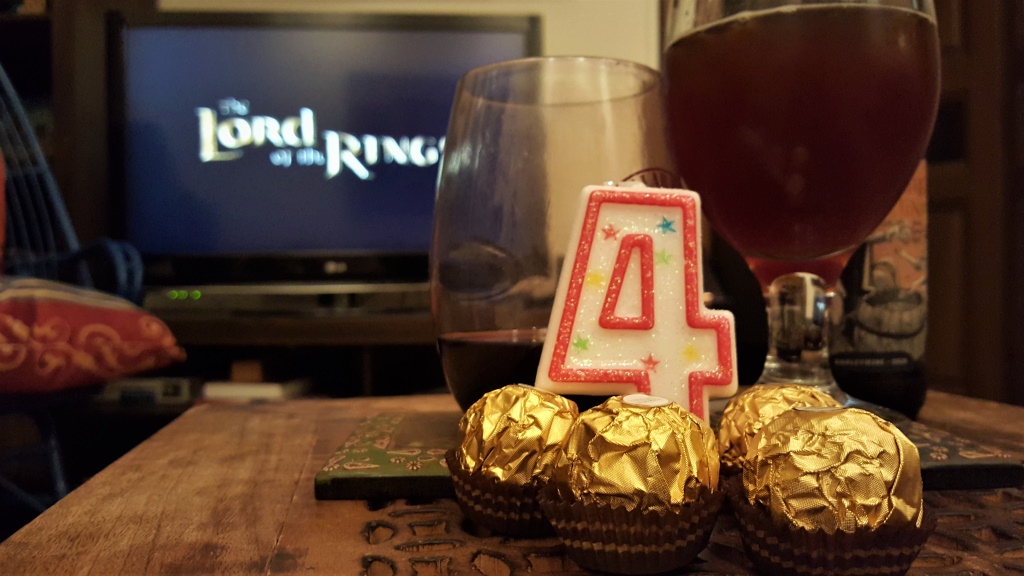 This month we also celebrated four years of travel! When we hopped a flight from O’Hare to Thailand↗ in 2015, we envisioned a year or two of slow exploration. But we fell in love. With all of it. We found we had a knack for it. And then the 2016 presidential election happened and we had every incentive to stay away. So, four years on, we’re still living out of backpacks in a new place each month. 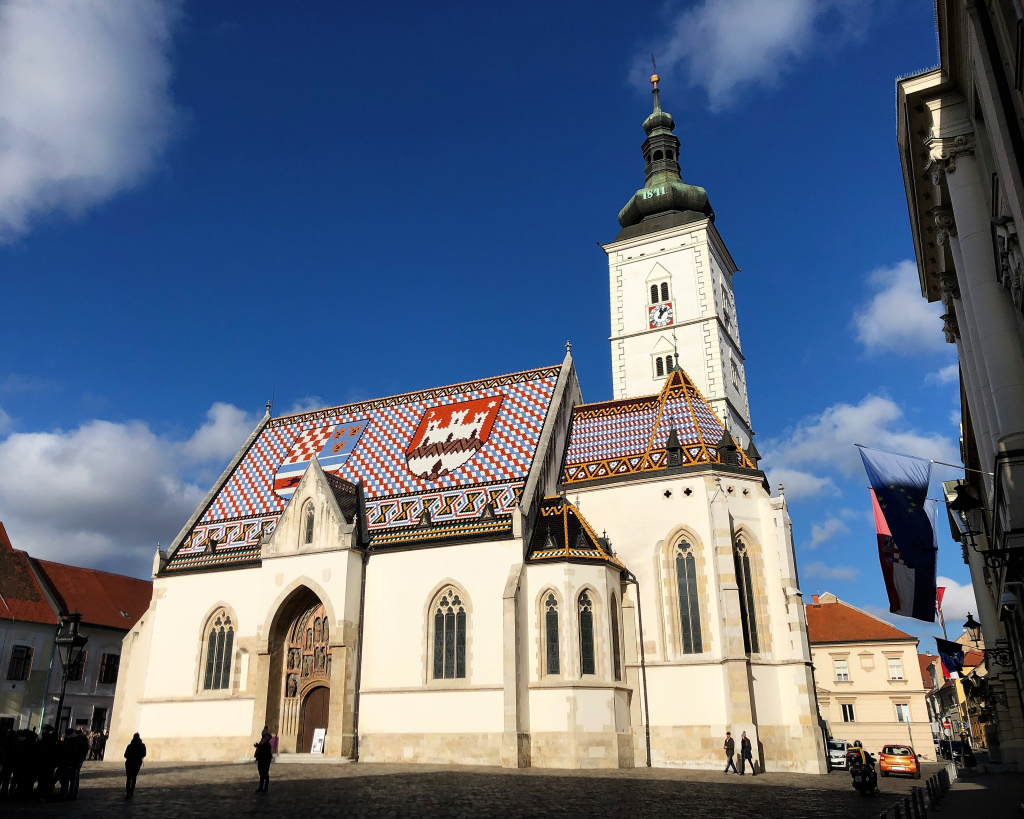 We never thought we’d be lucky enough to spend a month in Zagreb, let alone do it twice. But we keep rediscovering that Croatia is a great place to be, especially in the off-season. From the coastal cities of Dubrovnik↗ or Split↗ to the bustling interior, we just keep coming back.