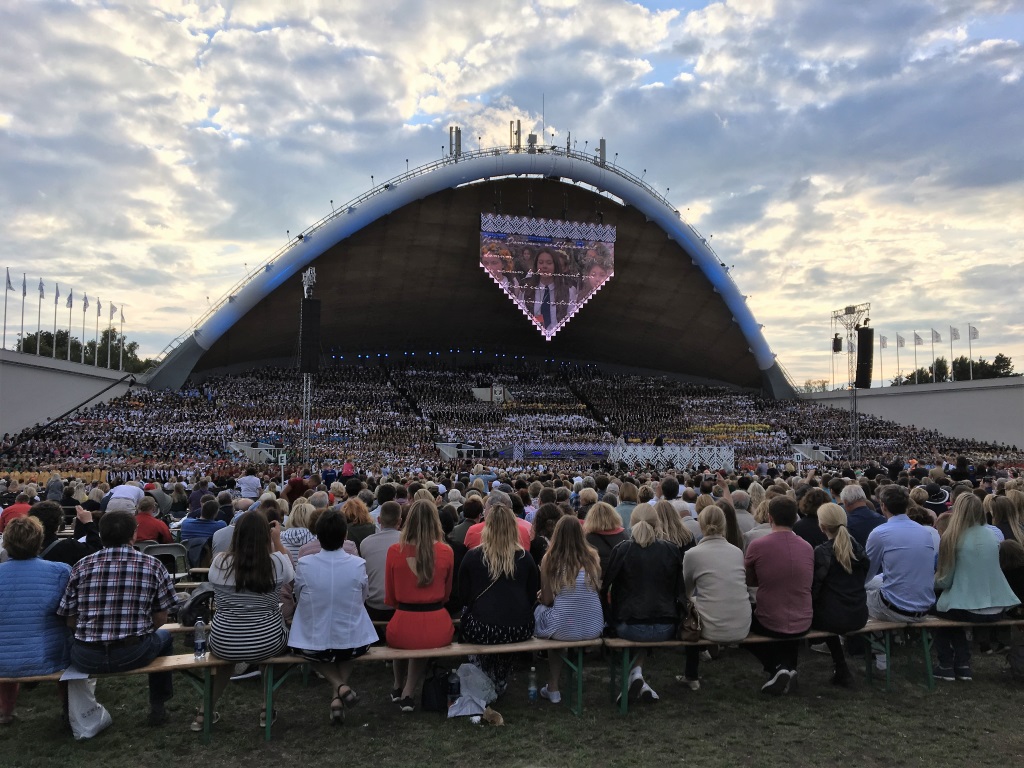 In the Baltic States, Song Festivals are a Big Deal. Lithuania’s only occurs once every four years. The 2018 edition coincided with the 100th anniversary of the restoration of independence, making it an even more important celebration. Tens of thousands came from across Lithuania and around the world to participate in the festivities. And we were lucky enough to be in town↗ for it! Nearly a week’s worth of events culminated in the iconic Song Day, and we attended as many as we could. 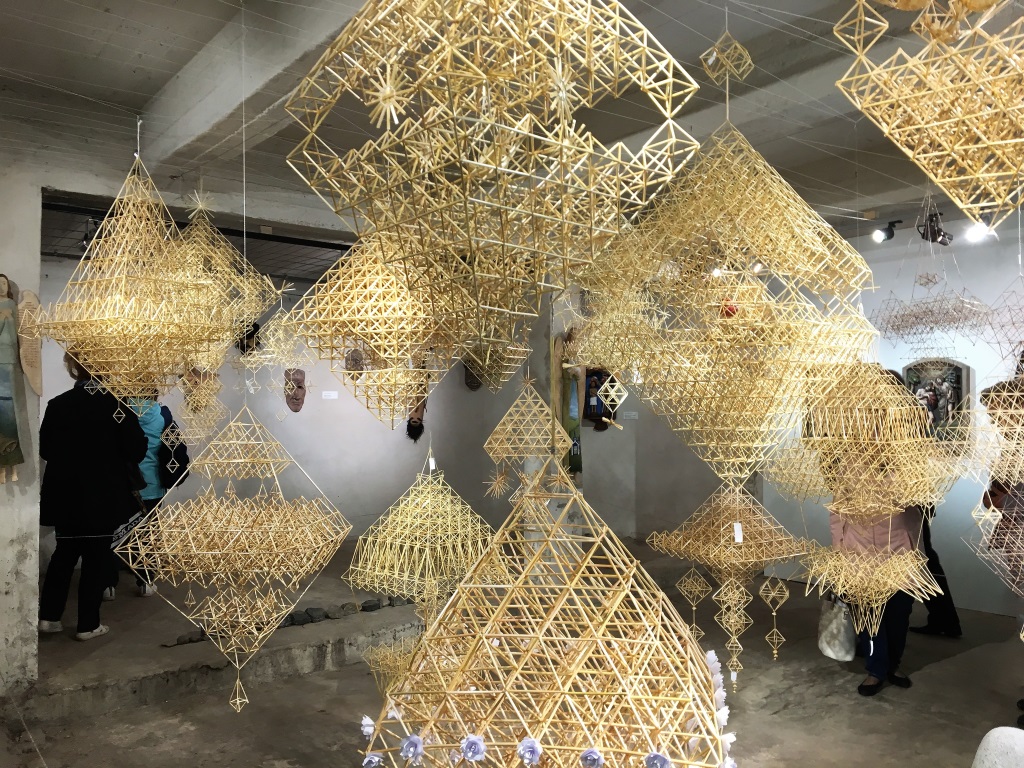 Our first stop was World Lithuanians’ and Lithuania’s Minorities’ Day. Lithuania’s diaspora reaches around the world, and organizations from the US, Canada, Australia, and around Europe and South America came to Vilnius’s Town Hall Square rep their Lithuanian heritage. Performers combined traditional Lithuanian songs with the musical stylings of their adopted homelands. As we walked around we almost bumped into President Dalia Grybauskaitė who, security detail in tow, was also touring the event.

A church-turned-art-gallery made the perfect setting for a Folk Art Exhibition. Paintings, woodcuts, and textiles complemented more esoteric artwork, like meticulously-painted eggs and paper cutting work so fine that it looked drawn-on. The talented folk artists even elevated straw ornaments to new heights. 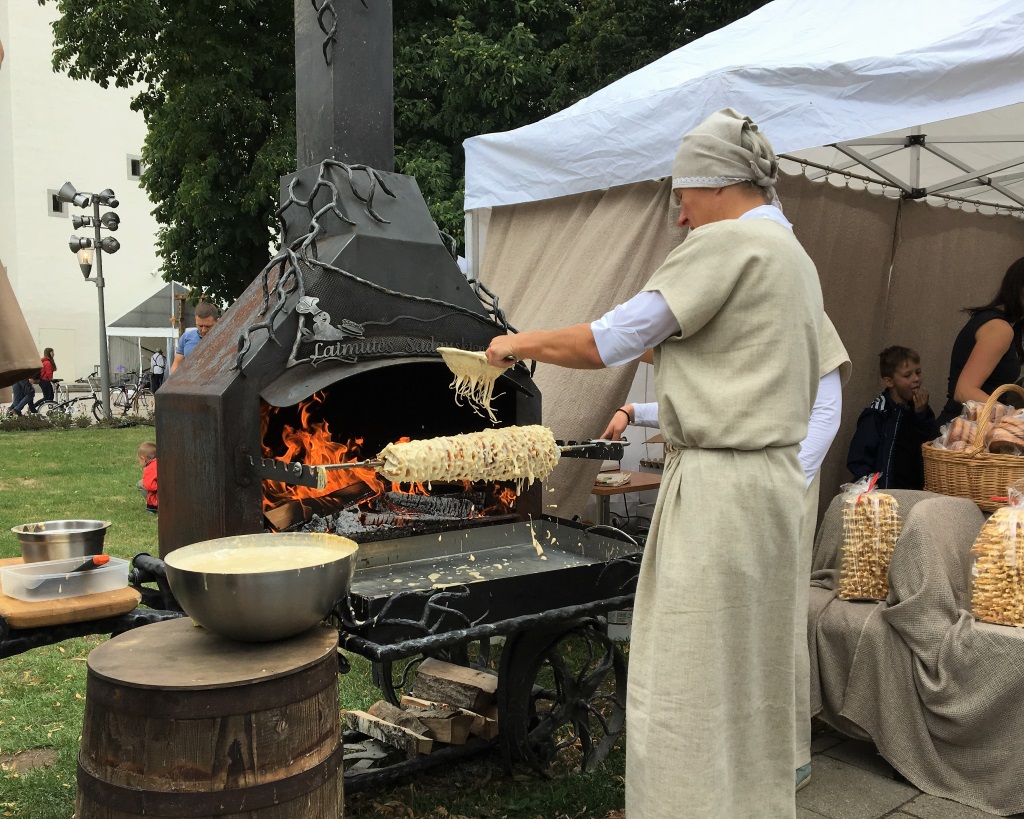 Next up were Folklore Day and Theatre Day, held in Bernardine Park and around Cathedral Square. Dozens small choirs, bands, and storytellers performed on large and small stages scattered around the grounds. The paths between them were lined with vendors offering handmade crafts and fair-style foods. It’s more fun to wander around with a beer in one hand and a serving of fried bread and in the other! 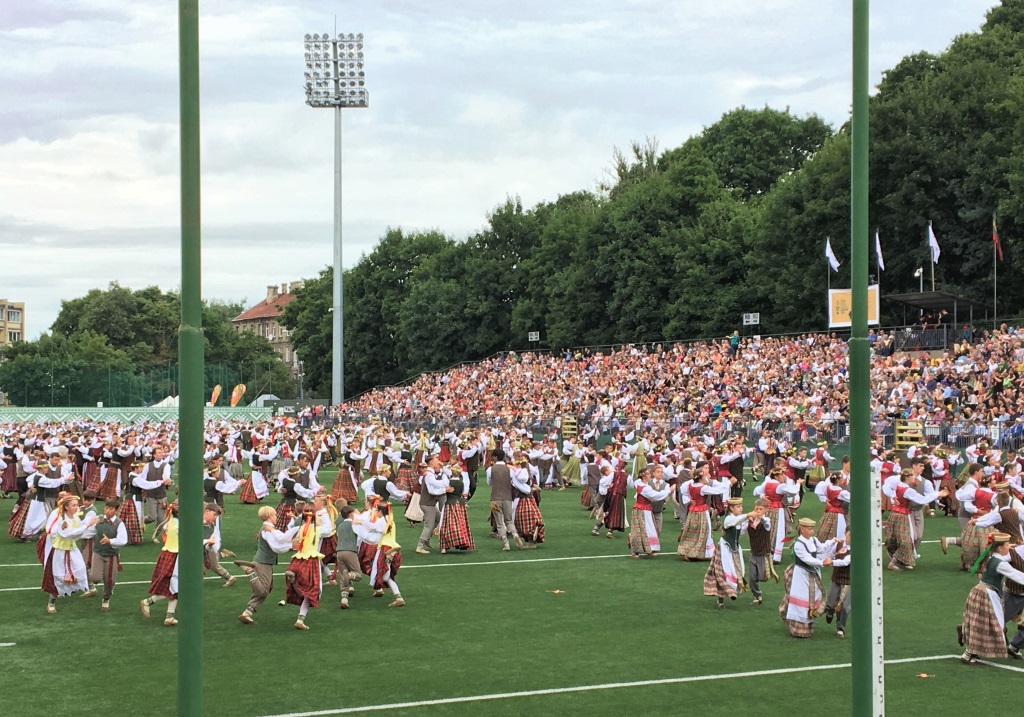 Friday was Dance Day, the first of the major musical productions we attended. An entire soccer pitch transformed into one giant stage. There, thousands of dancers of all ages whirled through complicated choreographies set to traditional folk songs►. Our stadium seats only gave a small glimpse of the massive display, but the sheer number of moving parts and colorful costumes dazzled us. They televised the entire program later that day, complete with some impressive aerial views that fleshed out the picture a bit. But nothing could compare to personally witnessing an entire country’s worth of dancers performing at once. 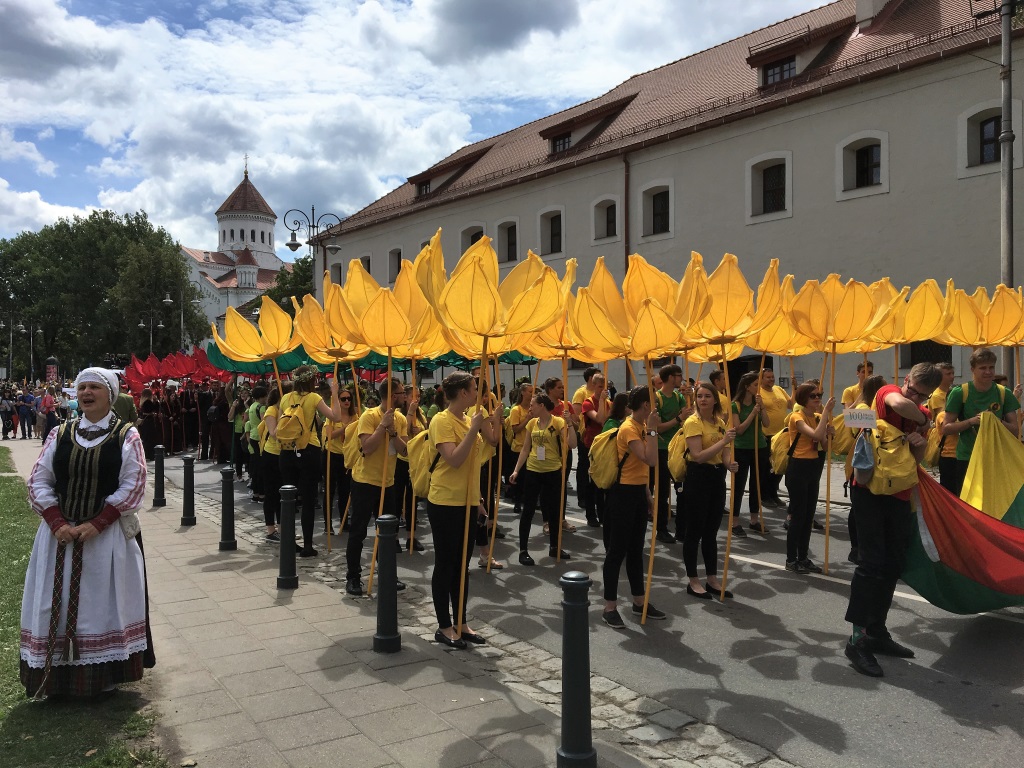 The culmination of the whole celebration was Song Day. But several hours before the concert began, the city of Vilnius was taken over by costumed revelers. Choirs and marching bands from just about every city and town in Lithuania joined in a massive parade from the Cathedral all the way to Vingis Park. We even saw delegations from as far away as Chicago and Buenos Aires. Most squads had their own proud flags and banners, from buff moose to armed bears to mer-deer. We walked along part of the route from the sidelines, following the procession to the concert stadium. 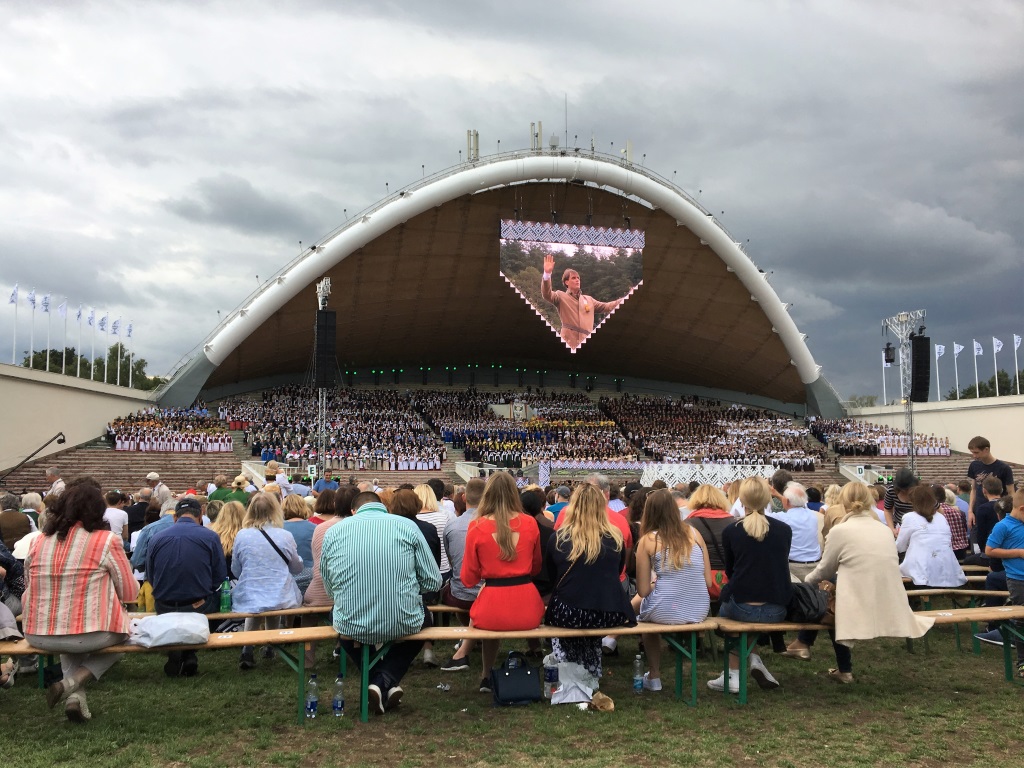 When we arrived at the band shell only a few choirs had taken their positions, so we grabbed a kibine before grabbing our seats. Anticipation built as seemingly the entire capital filed in to the festival ground. A sea of paid seats was completely filled, with countless more packing in to the park lawn. The Song Day Concert began with literal fanfare. When the choruses kicked in, we immediately understood the appeal. Even though we couldn’t understand any of the words, several thousand people singing in unison was an inspiring sight. At 9 p.m. everyone (here and nation-wide) sang the national anthem► in unison, an annual Statehood Day tradition. It ended with yellow, green, and red confetti raining down on the audience. 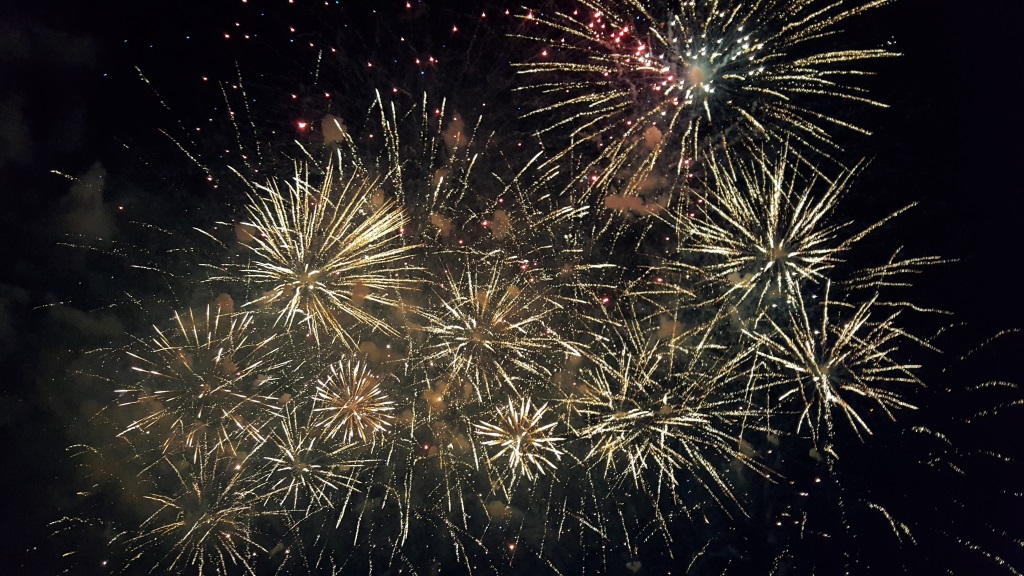 After the performance ended, we joined the throngs of people navigating the forest trails back to civilization, and a poppier Statehood Day concert beginning along the Neris. There, a sea of people spread out over the lawn. Food trucks were already running out of meals, but we found a passable bacon burger to tide us over. At 11 p.m., the sky still glowing faintly with midsummer light, the fireworks show began. Rockets shot up from the opposite riverbank. Sparks rained off a pedestrian bridge. For the nation’s 100th anniversary of independence, they pulled out all the stops. And, as one final surprise, the launches extended behind us as well – an overwhelming, sky-filling display. Easily one of the best bouts of pyrotechnics we’ve ever seen. 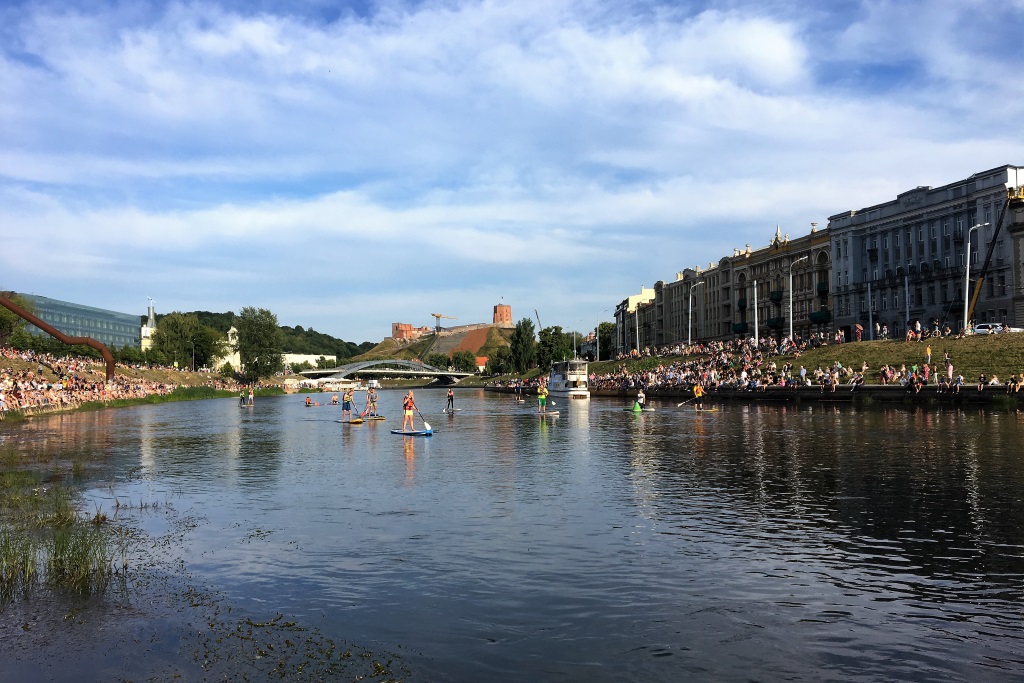 Several other summer festivals happened at the same time and only added to the celebratory atmosphere. The Christopher Festival, focused on sacred and classical music, took place in multiple venues and kicked off with a military band serenading a riverside audience from a moving boat. A collection of fair-like activities filled Gediminas Avenue on one weekend. Kevin couldn’t pass up the chance to jump off a 3-story lift onto a giant airbag. He survived►! A bike race – 100 kilometers commemorating the 100 years of restored independence – blocked off a few blocks one evening as riders completed laps.

We were thrilled that our trip coincided with this rare opportunity to experience Lithuania’s biggest celebration of culture and heritage. Though it was one of the occasions where the language barrier loomed larger than usual, just being here to witness the festivities was exciting. The positivity and excitement was simply infectious – no translation required. 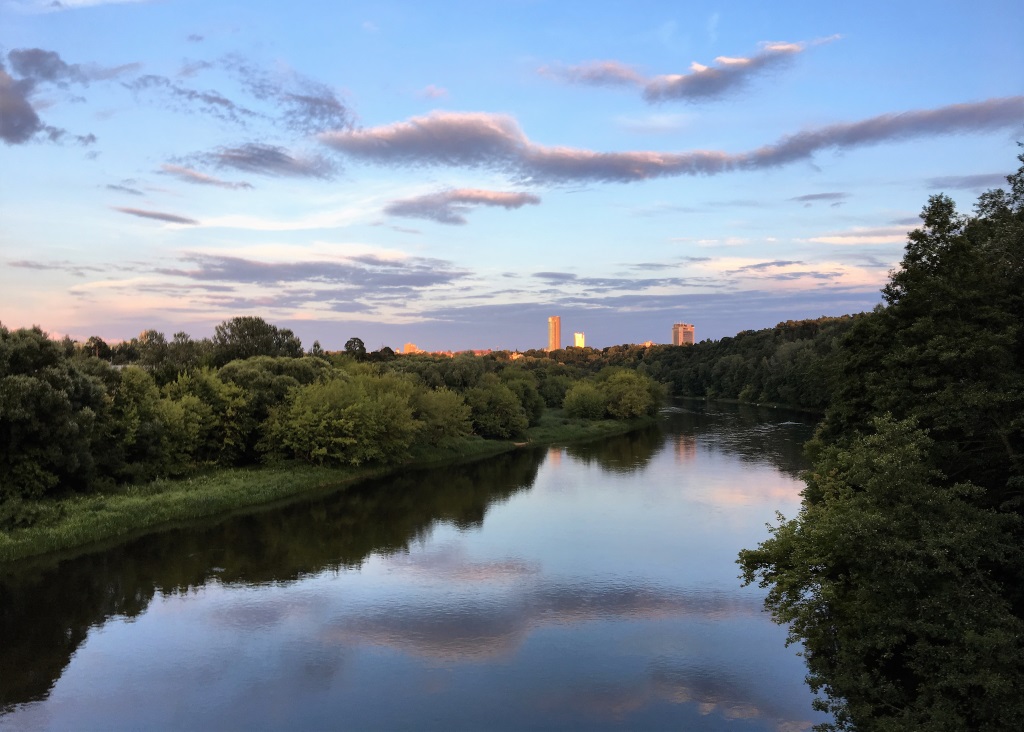