Lisbon is a beautiful city of landmarks, and we would have been happy spending the whole month there without leaving. That would have been a mistake. Two of Portugal’s must-see attractions are within easy reach of the capital, so see them we did. Sintra is a small spot jam-packed with palaces. Mafra has just a single palace, but it ranks among the most incredible in the world. Either would be worth a visit, but both together put the country’s powerful past into perspective. And made for some great pictures.

Sintra is just an hour by train outside Lisbon↗, an absolutely ideal destination for day-trippers. The town has a long history, gradually shifting from defensive outpost to monastic hub to royal retreat. Our first stop was the Castelo dos Mouros – Castle of the Moors. 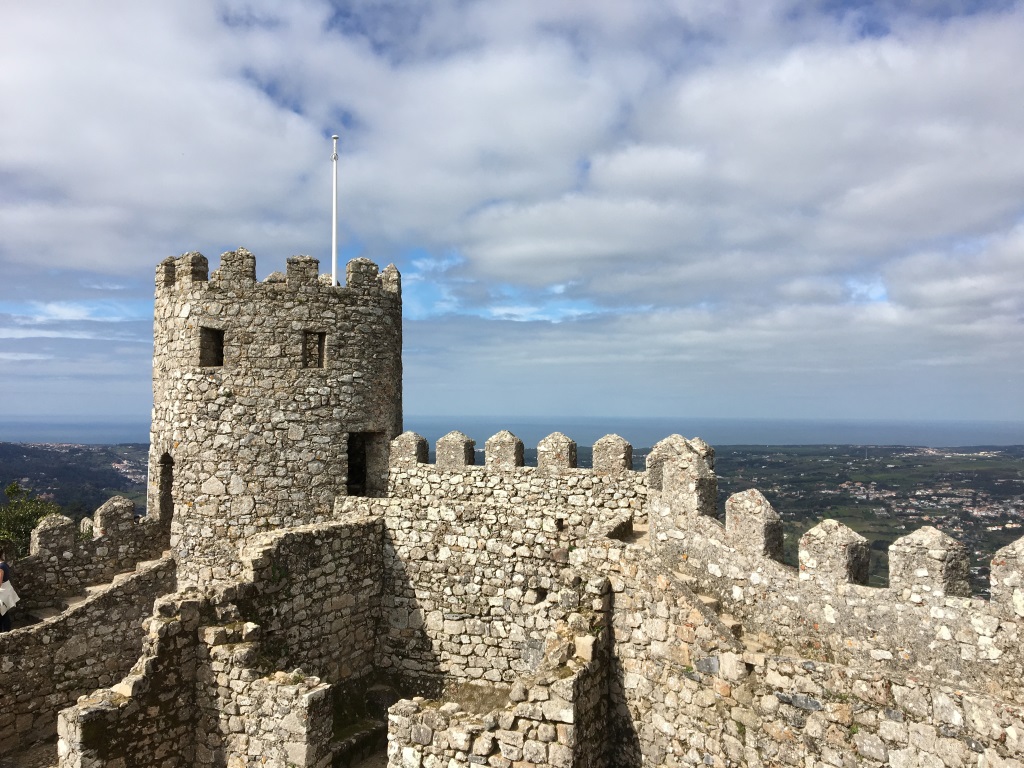 This hilltop overlooking the Atlantic has been home to some sort of fortification for more than 1200 years. It was originally built by the Moors, Muslims that controlled Sintra (along with the rest of the Iberian Peninsula) for centuries. 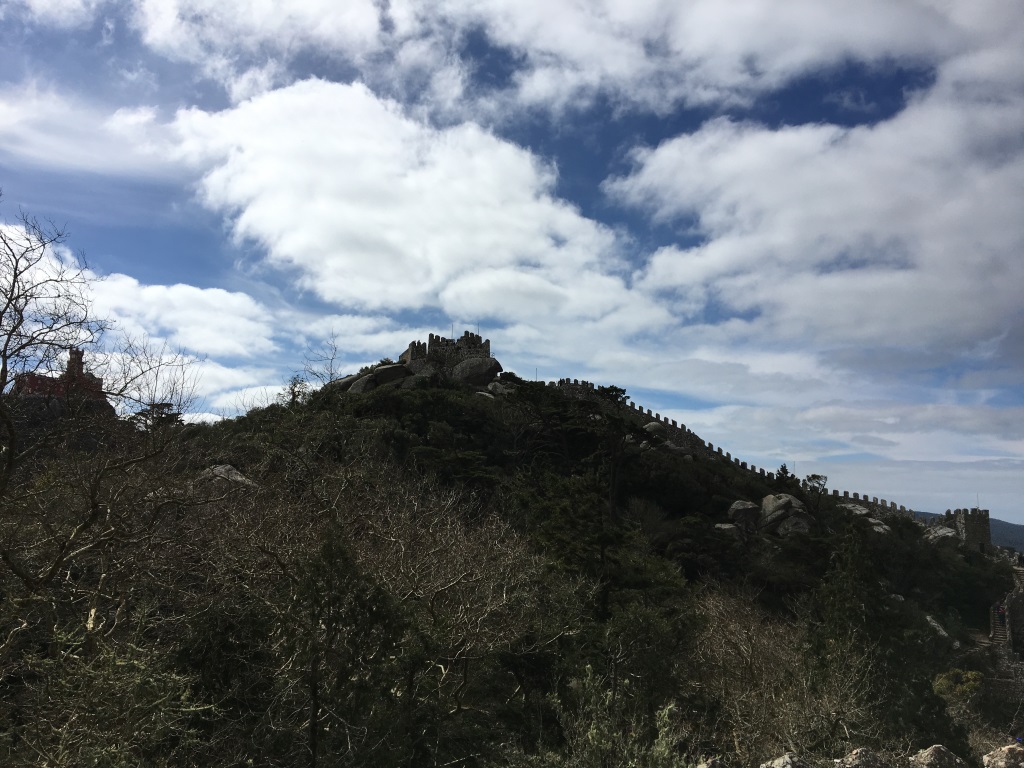 The castle is enormous. Endless stretches of crenelated walls bring to mind images of the Great Wall, and clambering around on stone towers and pareidolic outcrops felt like a childhood dream come true. 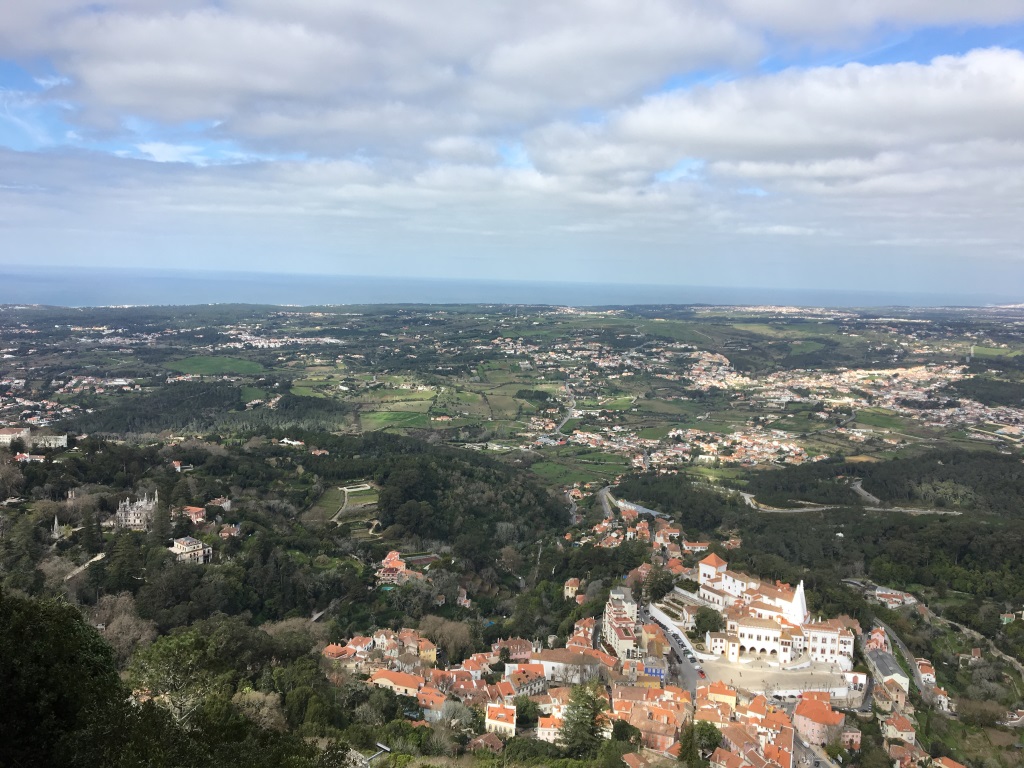 It also came with a great view, from the Sintra National Palace below to the shores of the Atlantic Ocean less than 10 km in the distance. We’d eventually see many more castles in our travels, but Castle of the Moors rightfully earned a place in our hearts as one of our all-time favorites↗. 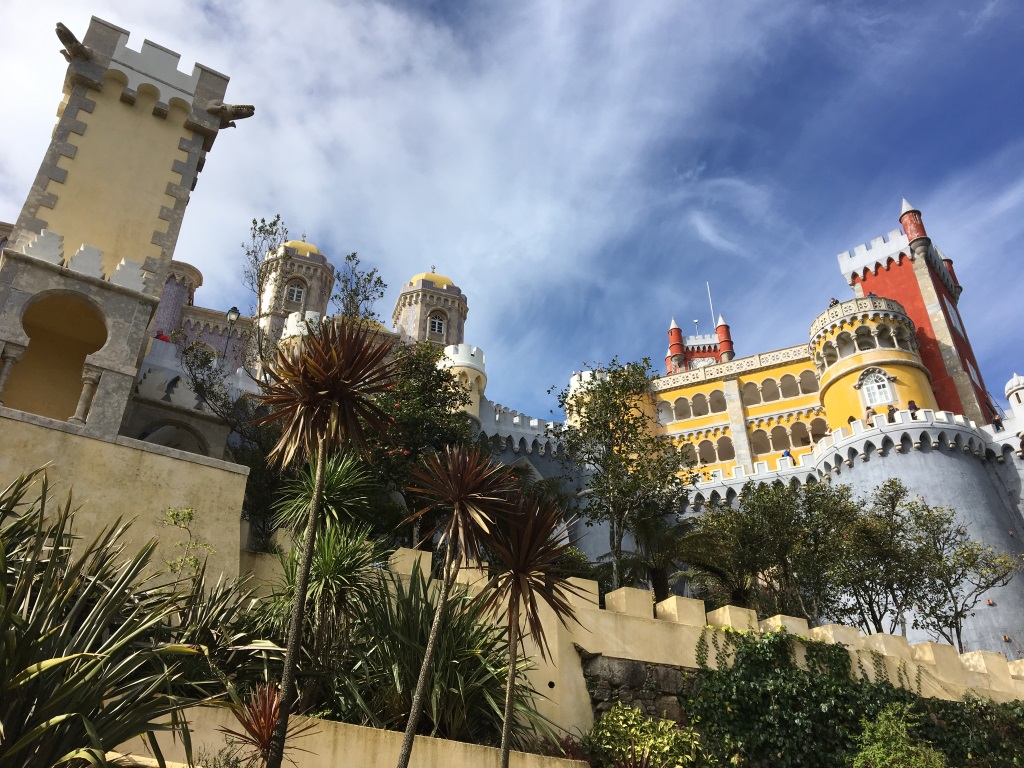 On the very next hill, Pena Palace is the Moorish Castle’s polar opposite. The vibrantly colored building was only completed in the mid-1800s. An older chapel and monastery formed the foundation, but this is a modern work of fancy. 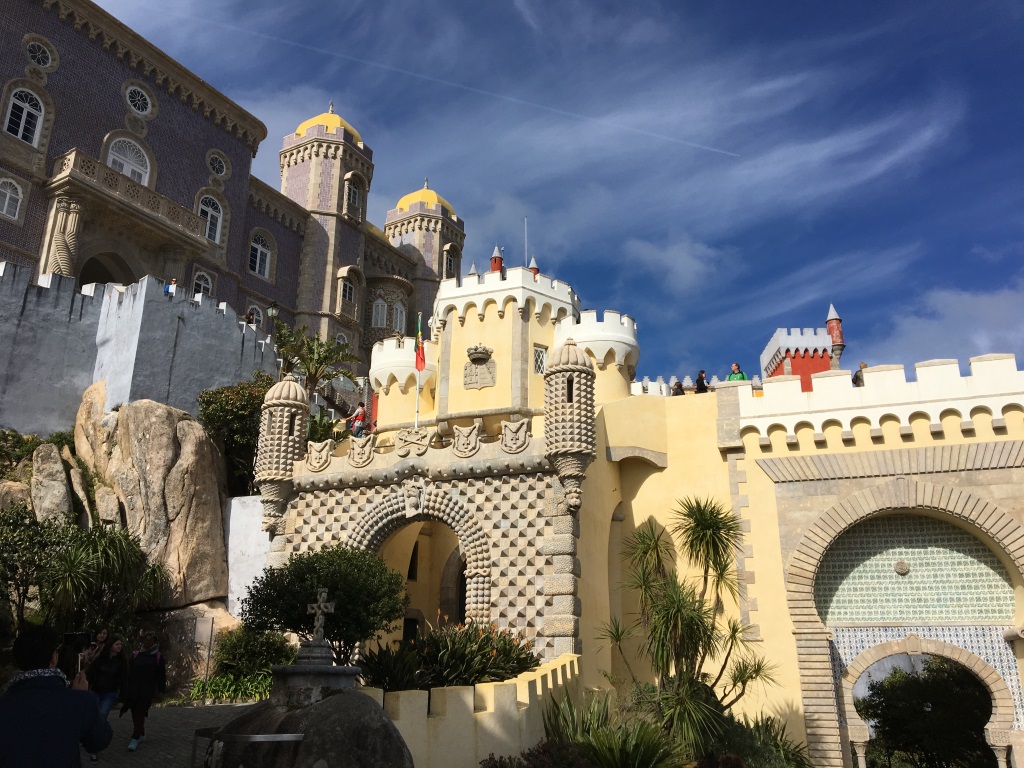 The hodgepodge of styles and motifs make it a divisive landmark. Is it a bold and beautiful treasure? Or a garish eyesore? 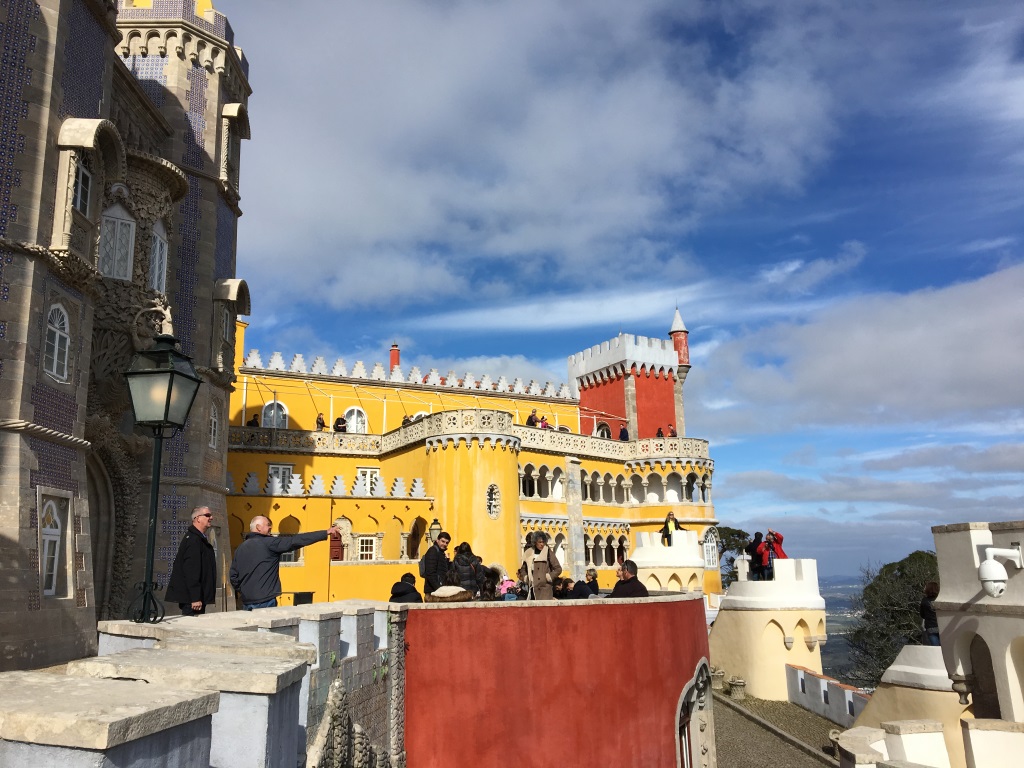 One this is for sure: it wouldn’t be half as famous if wasn’t so interesting. Even in February the Instagrammable manor draws big crowds. 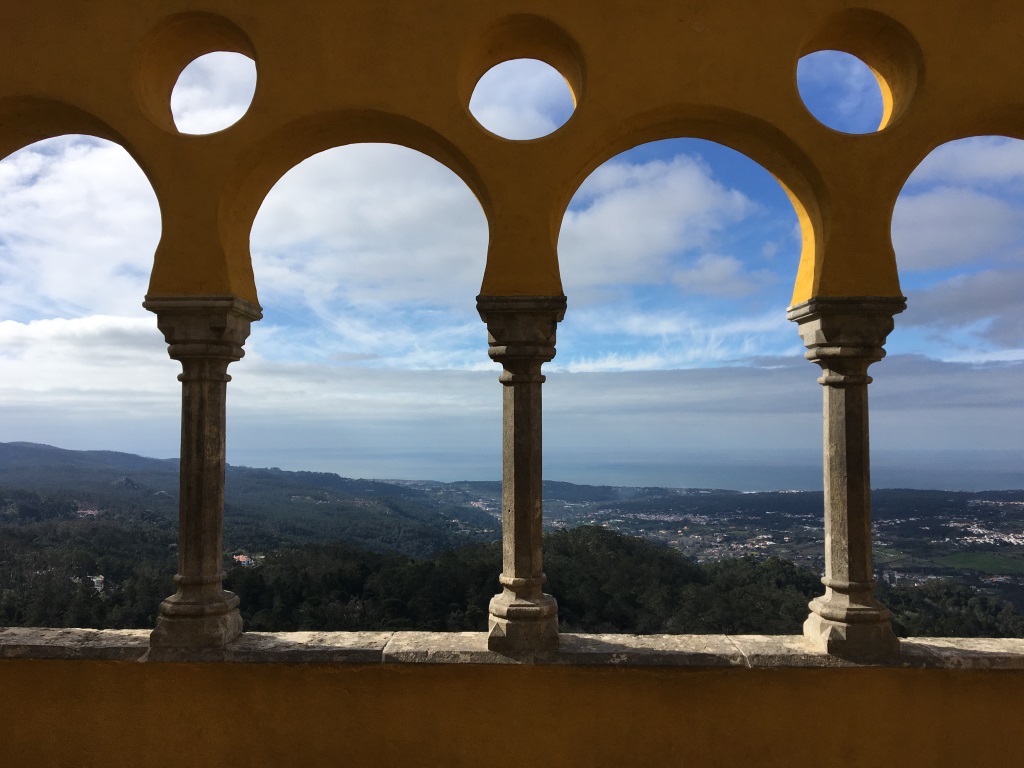 Like the Castle of the Moors, Pena’s prominence offered captivating views. We looked across the Atlantic and thought about our home continent on the other side. 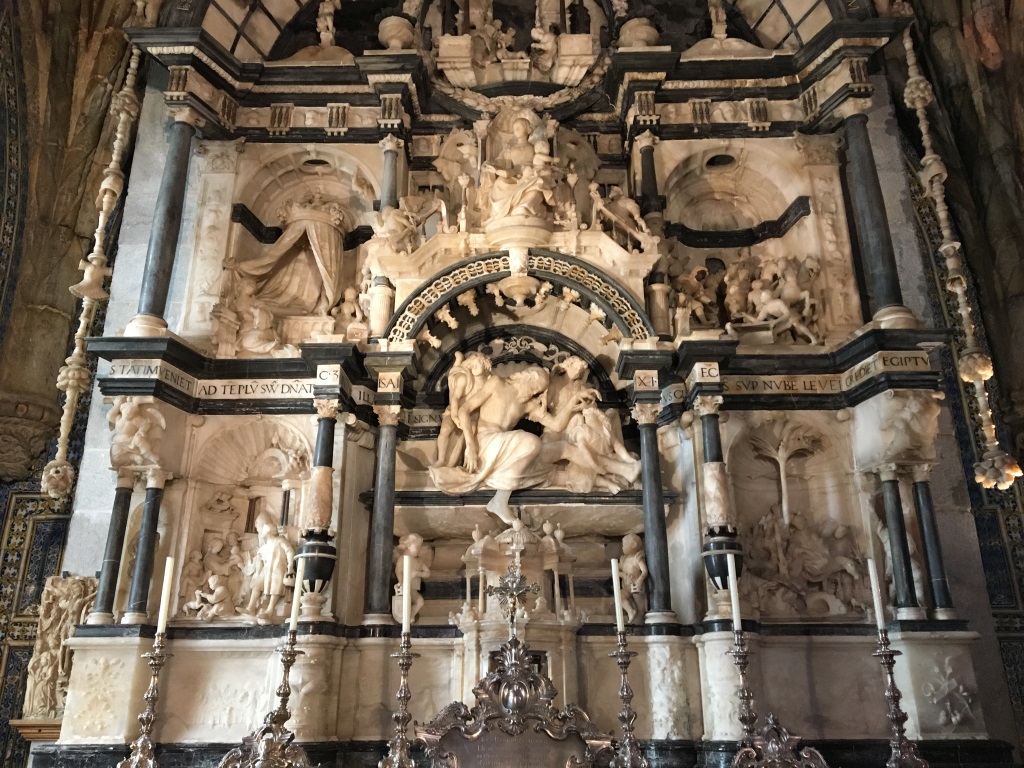 The interiors were as ostentatious as the facades. Tiled courtyards and ceilings, flowery items, and unreal furniture demonstrated the momentary might of the Portuguese Empire. 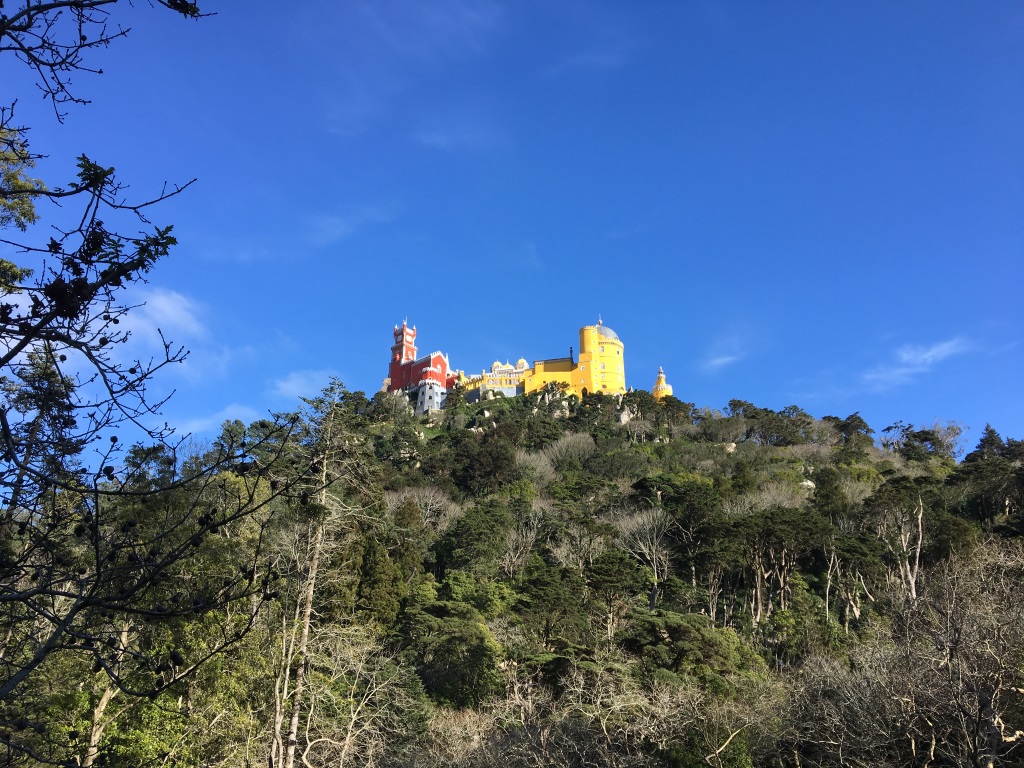 Even the surrounding gardens showed off wealth. Vast tracts of land were planted with trees imported from around the globe. In situ statuary completed the ensemble. 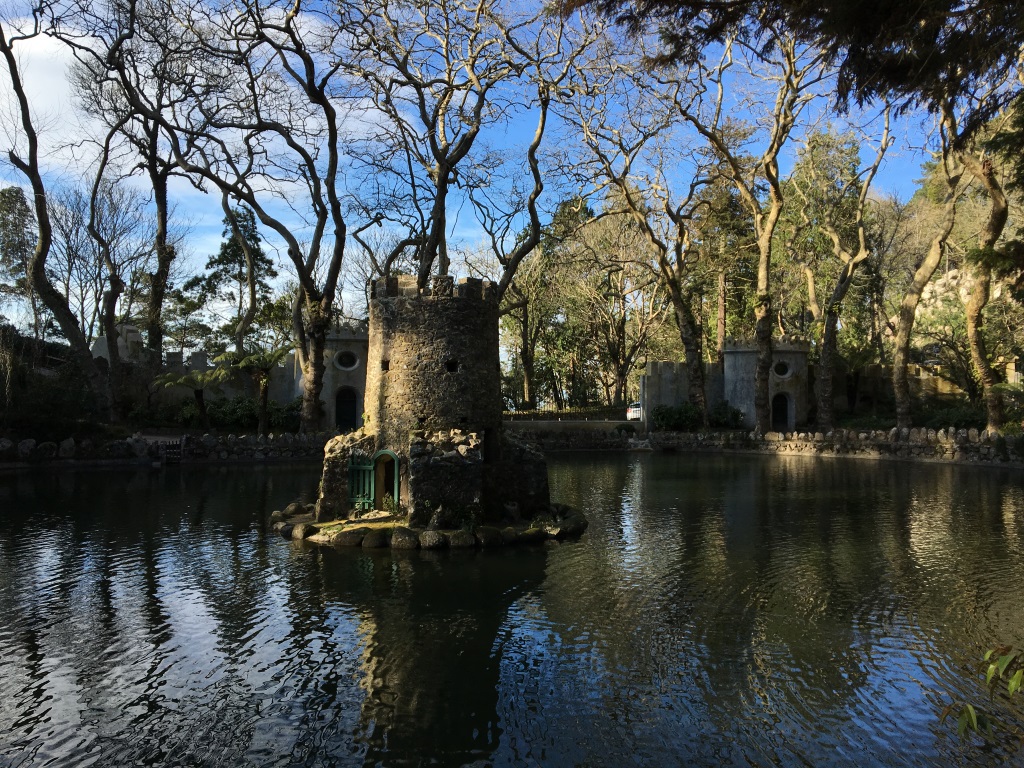 Mossy steps descended to a series of man-made lakes, complete with miniature castle islands of their own. A population of black swans added a final touch of elegance to the day’s travels. Even more estates dot the area in and around Sintra, but they would have to wait for another time.

The Palace of Mafra is an entirely different beast. Initially planned as a modest monastery, the massive influx of gold from the colony of Brazil allowed the king to greatly expand his vision. 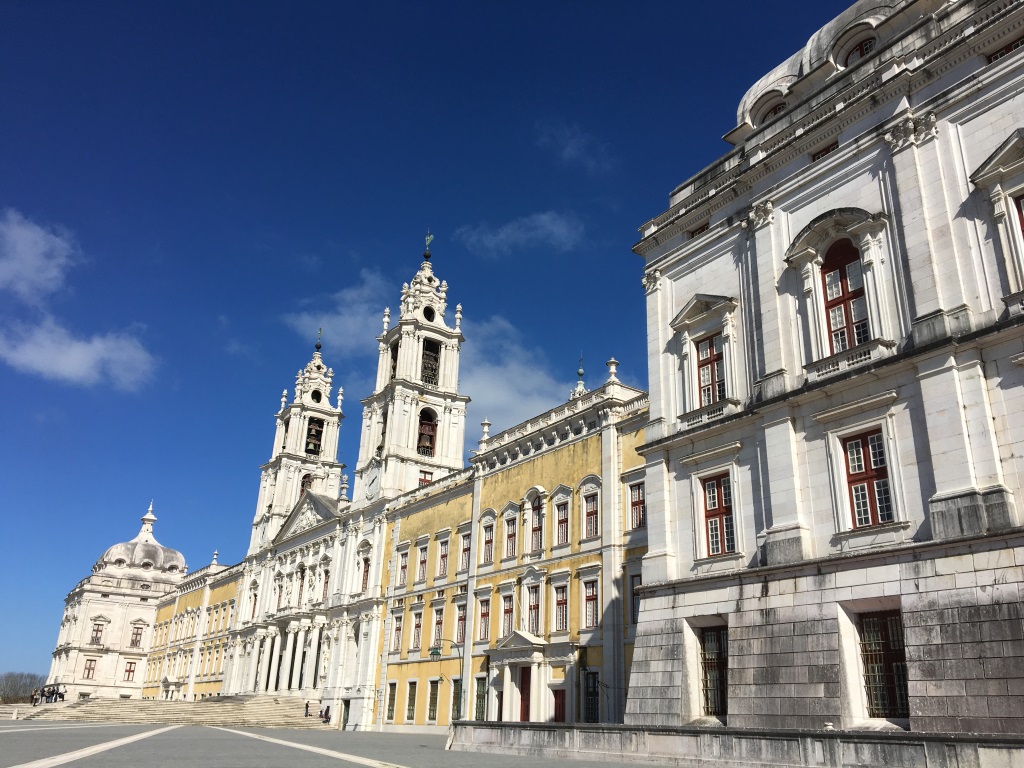 Greatly expand. Our cameras couldn’t capture the scale of the thing. The center section is an entire basilica in and of itself. The whole complex covers almost 40000 m² or more than 400000 ft². It has around 1200 rooms. 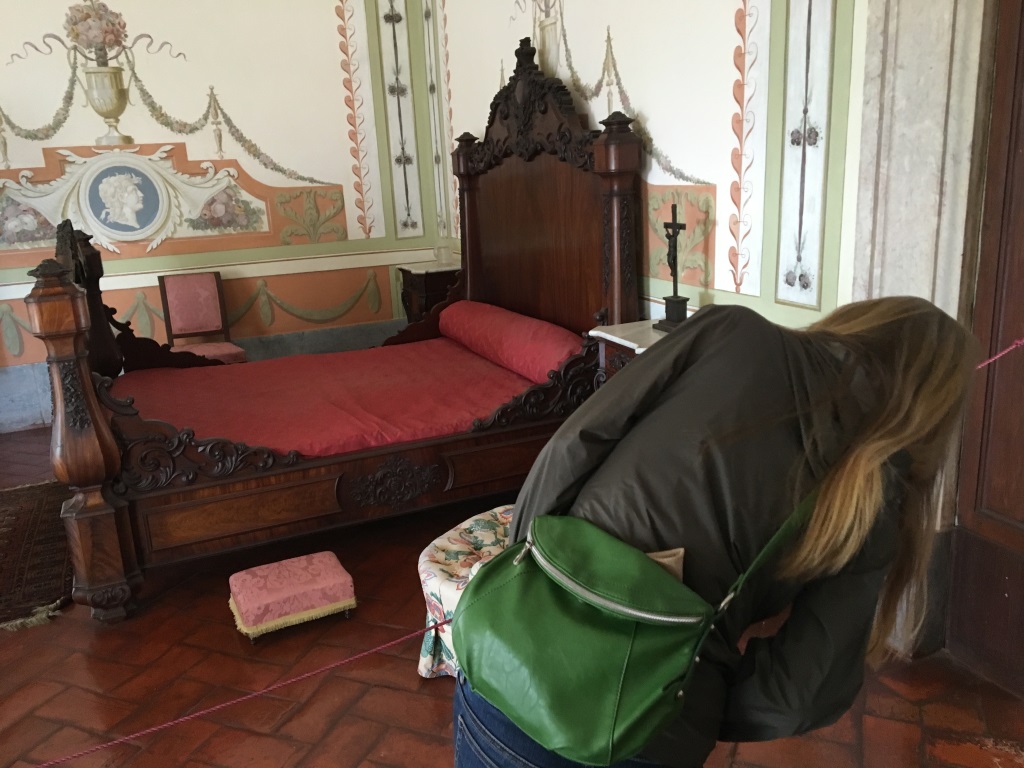 The King’s and Queen’s residences were on opposite ends of the main hall. We had a hard time imagining ourselves in their shoes. Or their tiny beds, for that matter. 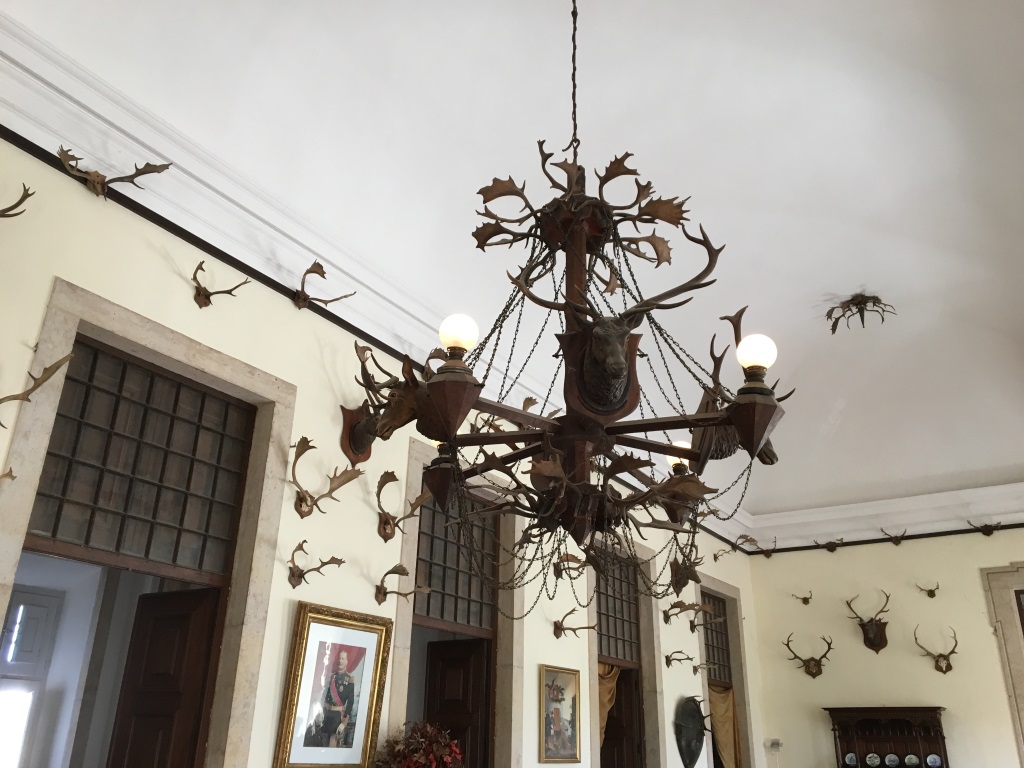 The palace was also conveniently located near the royal hunting grounds. Trophies from countless kills adorned the walls and were even made into furniture and chandeliers. It seems that one “game room” just wasn’t enough. 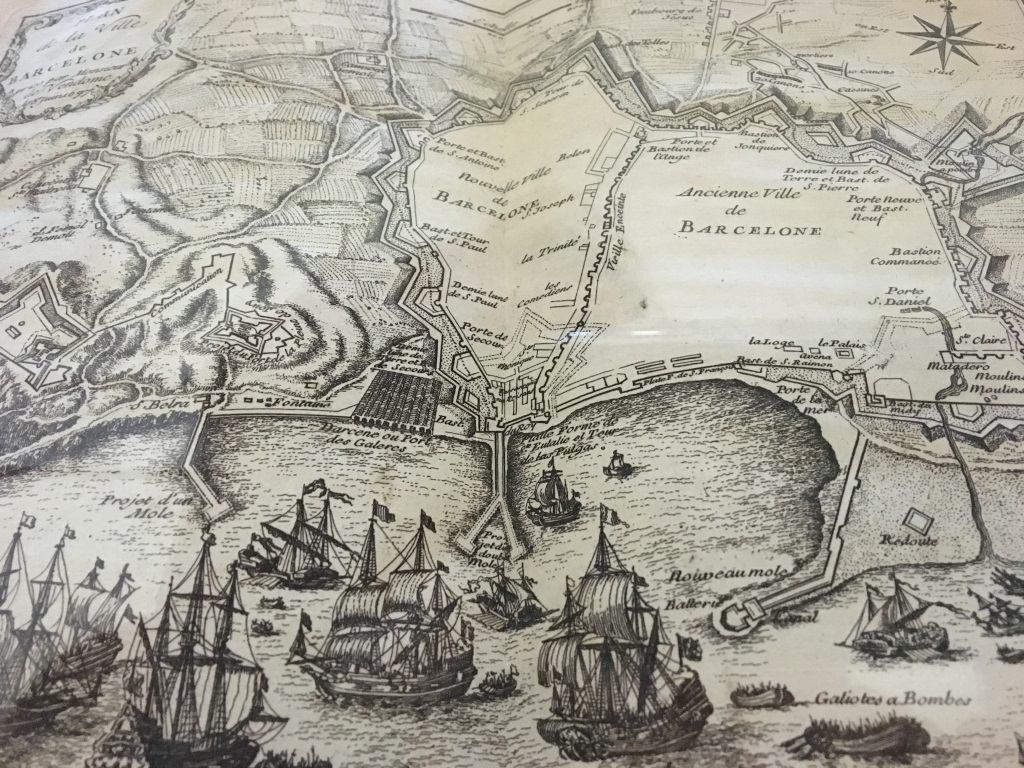 But for all of the excess, Mafra was on our list for one reason only: books. The palace rooms started  to take on a more literary feel, showing off historical tomes and intricately painted pages as lead-up to the main attraction. 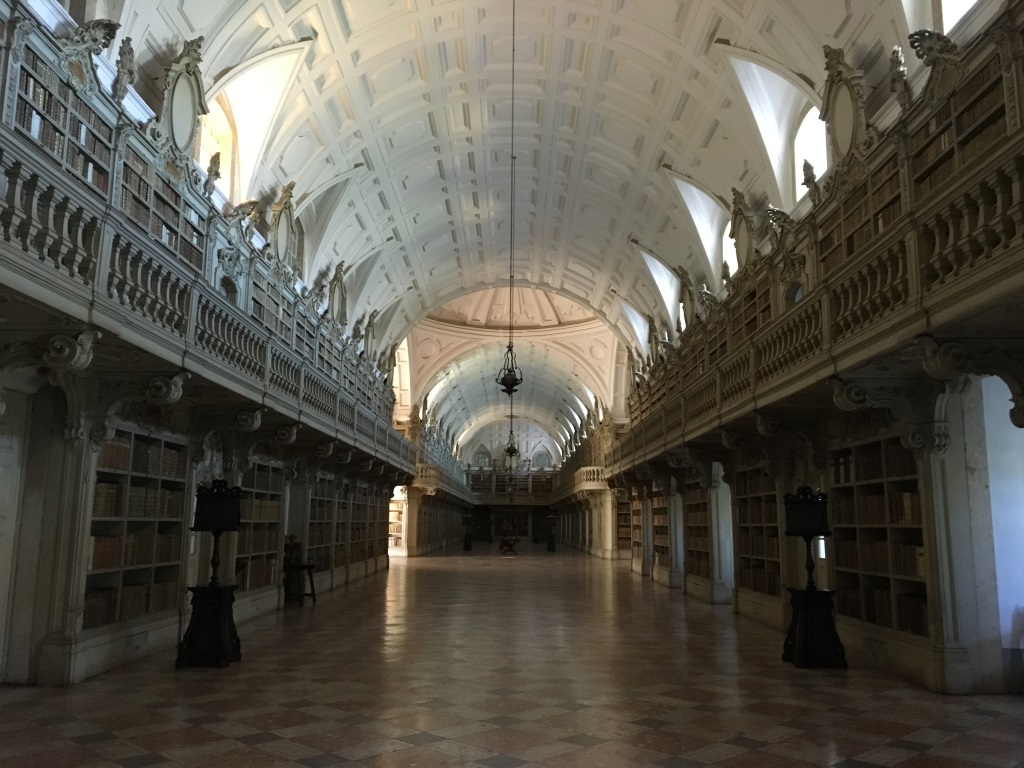 The Mafra Palace Library. 40000 rare and old books stuffed into glamorous bookcases in the Rococo style. A family of bats guards the hall against invasion by bug. The scale and beauty of the place made it hard to say goodbye. 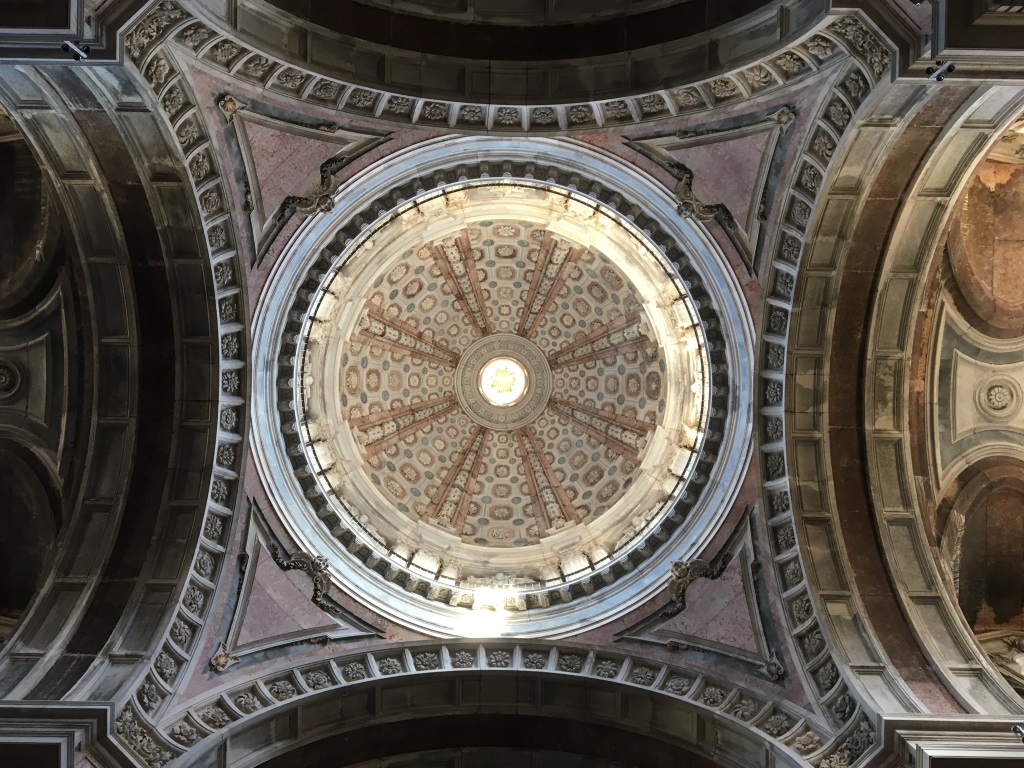 No expense was spared on the basilica either. In any other context, it would be the main attraction rather than a small piece of the whole.

The size and scale of the place blew us away. Between Sintra and Mafra, we began to appreciate just how powerful the Portuguese must have been, but also how much of Europe’s splendor is owed to the countless lives they enslaved and exploited around the world. The trophies of that era were incredible to witness, but we’re glad the sun has mostly set on “empires.”