We couldn’t be digital nomads without travel-friendly tech. Compact computers let us work from anywhere on the globe, modern smartphones are as adept at translating a menu as calling home, and the technology behind our favorite childhood video games now fits into a handheld gadget. Here is some of the “travel tech” that powers our trip around the world. 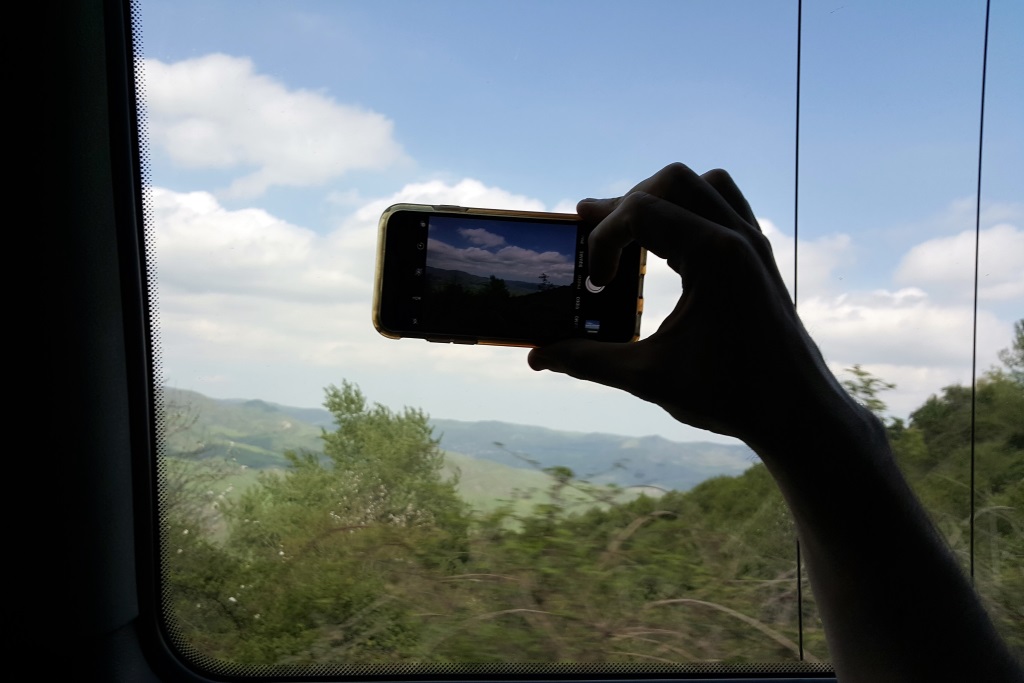 Our phones are undoubtedly the most indispensable items in our travel arsenal. They’re our cameras, maps, translators, communicators, and time wasters. Kevin uses an iPhone X (previously 6s), Danielle carries a Samsung S6. It’s really useful to us to have access to both ecosystems. Between the different app stores we have access to any app we could want. And being able to test on both iOS and Android is critical for Kevin’s mobile game development.

The devices themselves are fine. Both were starting to show their age after 3 years, but Kevin only pulled the trigger on a new device because of a broken screen, and Danielle is in no rush to upgrade. Testing on older devices helps ensure Kevin’s games will run on a broad range of hardware, and beat-up handsets are less tempting targets for pickpockets and purse-snatchers.

Many long-term travelers invest in expensive DSLRs to take the best possible photos, but we are pretty happy with our phone cameras. Every photo on our site↗ was taken with them. Only occasionally do we wish we had a high-powered lens.

We tried a number of cloud storage solutions to back up our photos: Apple iCloud, Amazon Drive, Google Drive… but we ultimately settled on Microsoft OneDrive. That service provided the best storage/price ratio, device compatibility, and upload speed. 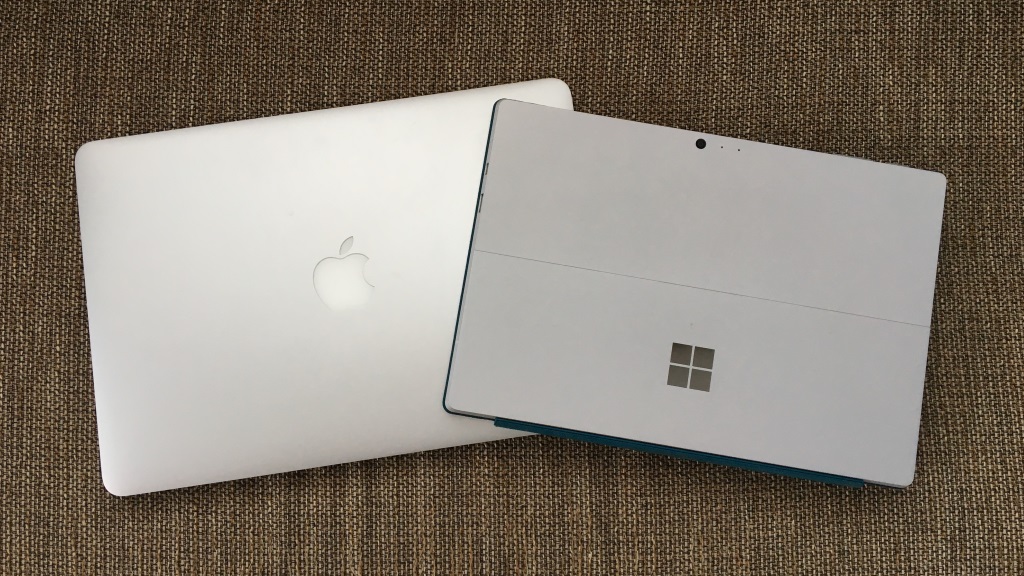 While our phones are our most important hardware as travelers, our computers are what make it possible to work as digital nomads. Once again, we tried to cover both the dominant ecosystems for maximum software compatibility. Kevin originally used a Microsoft Surface Pro 4. We’ve had so many issues with ours that we can’t help but recommend against it↗. Recently he switched to an HP Spectre x360. Chunkier and less sexy than the Surface, but far more featured and a much better value.

Danielle’s computer is a MacBook Air. It doesn’t have top-of-the-line specs, but it’s proven reliable for everyday use. In fact, it replaced our previous Air that had lasted an incredible 7 years. Kevin steals it from time to time to compile his iPhone builds. The newer Air is a bulkier 13″ instead of our preferred 11″ – Apple unfortunately stopped making the smaller model a while ago – but still slender enough to fit in our carry-on. 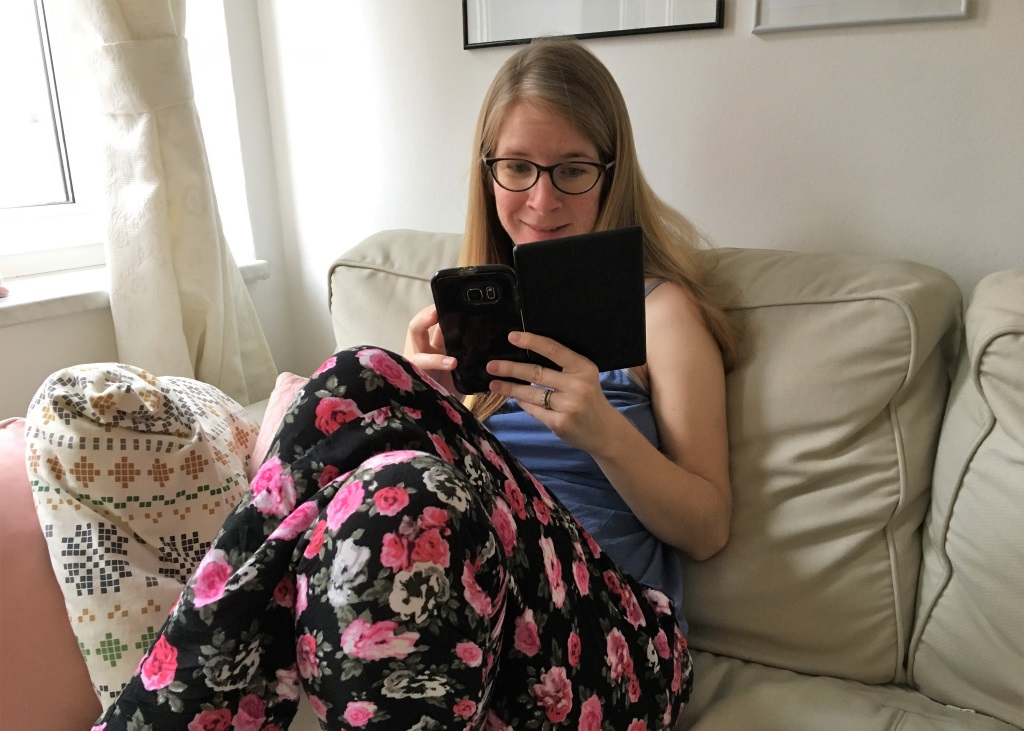 We’ve picked up a small number of entertainment devices to keep our spirits up on the road. After our first year of travel demonstrated the expense and unreliability of finding English-language books around the world, Danielle finally caved and bought a Kindle. So, it’s not quite the same as reading on paper. But it does make it much easier to keep up a constant flow of literature.

(Both have since been ditched in our storage unit.) 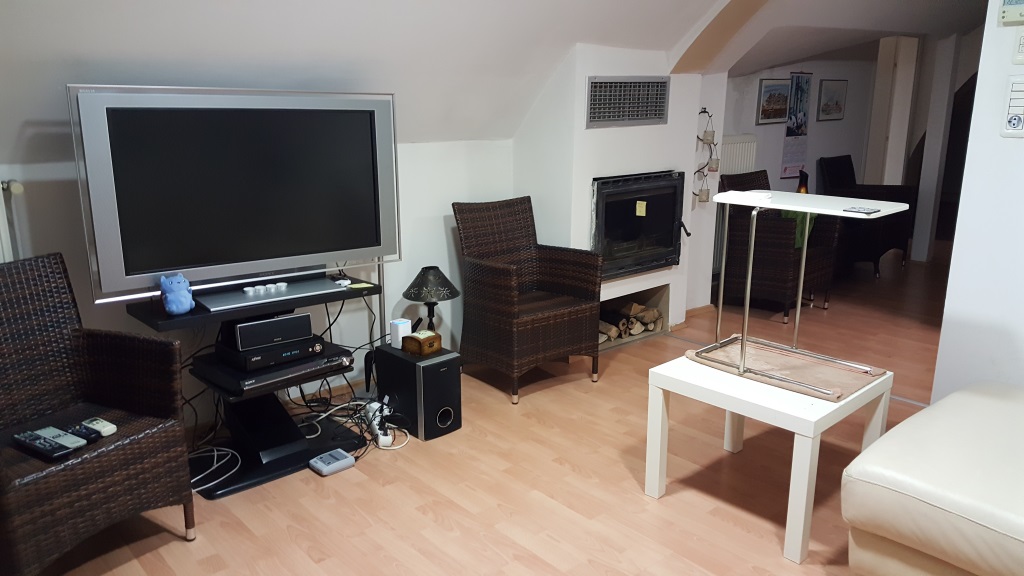 In addition to our standard collection of chargers and plugs, we make sure to carry a Mini DisplayPort to HDMI adapter so we can connect our computers to the TV for shows and movies. Few Airbnbs have many English-language channels for us to watch, but almost all of them have a TV with an HDMI port. With Netflix, Amazon, and a few media stores, we’re never lacking quality content when we want to spend a quiet night in.

A lot of travelers invest in noise-canceling headphones in anticipation for long trips and noisy hostels. We stuck with the inexpensive earbuds that came with our phones. While there have been occasions when pricier ones would have been nice, ours add no weight or bulk to our bags.

Travel has been hard on our power cords, though. Getting packed and folded and repacked wears them quite a bit. Almost all of them now sport electrical tape patches.

Even with our unusual pile of gadgets and wires, we’re rarely hassled by airport security. Only a few times have they pulled out our bag of adapters – more often they just scowl at the x-ray and ask something like, “you have cables in your bag?”

Except for the Surface, we’ve been reasonably happy with our picks so far. We have the flexibility to develop, write, and connect when we need to. Everything packs up neatly into our carry-on bags. We’d recommend anything on our list of past and current devices. Except for the Surface.