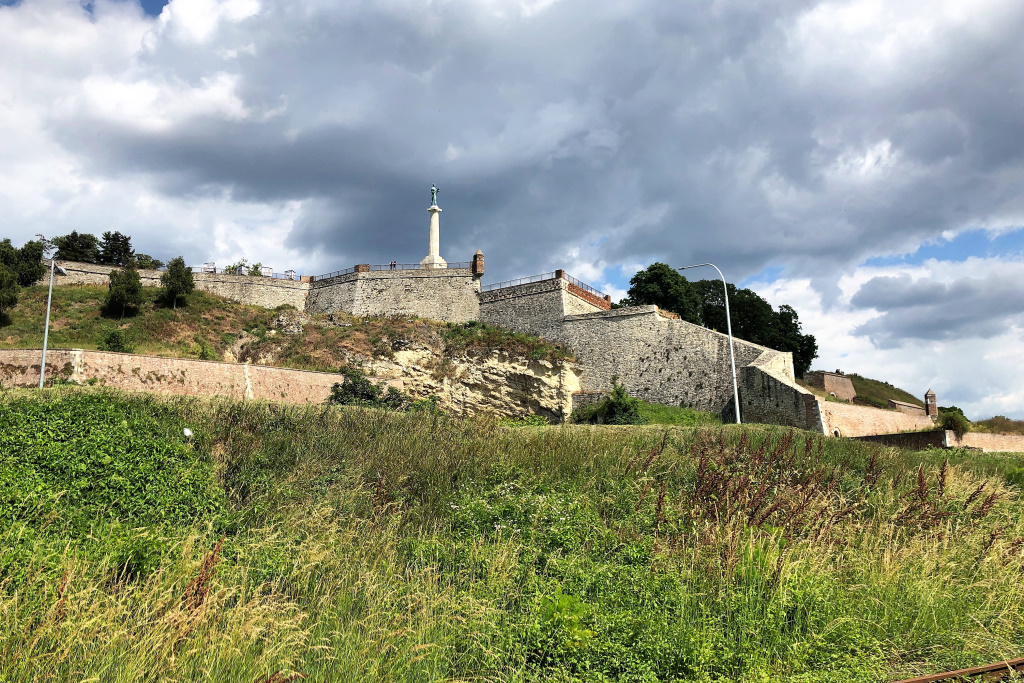 The pandemic scared most nations into refusing entry to all but their own citizens. Serbia went a different direction, being one of the first to reopen their borders to everyone. And as American passport holders started to become global pariahs, “open to everyone” was a bar even we could clear. We’d actually considered visiting Belgrade earlier in our travels, but had been put off by its reputation as a party city. Instead we’d picked Novi Sad. A perfectly cromulent choice at the time, but now the bustling (but not too bustling) capital seemed like a decent bet… and put future moves on the continent within reach. 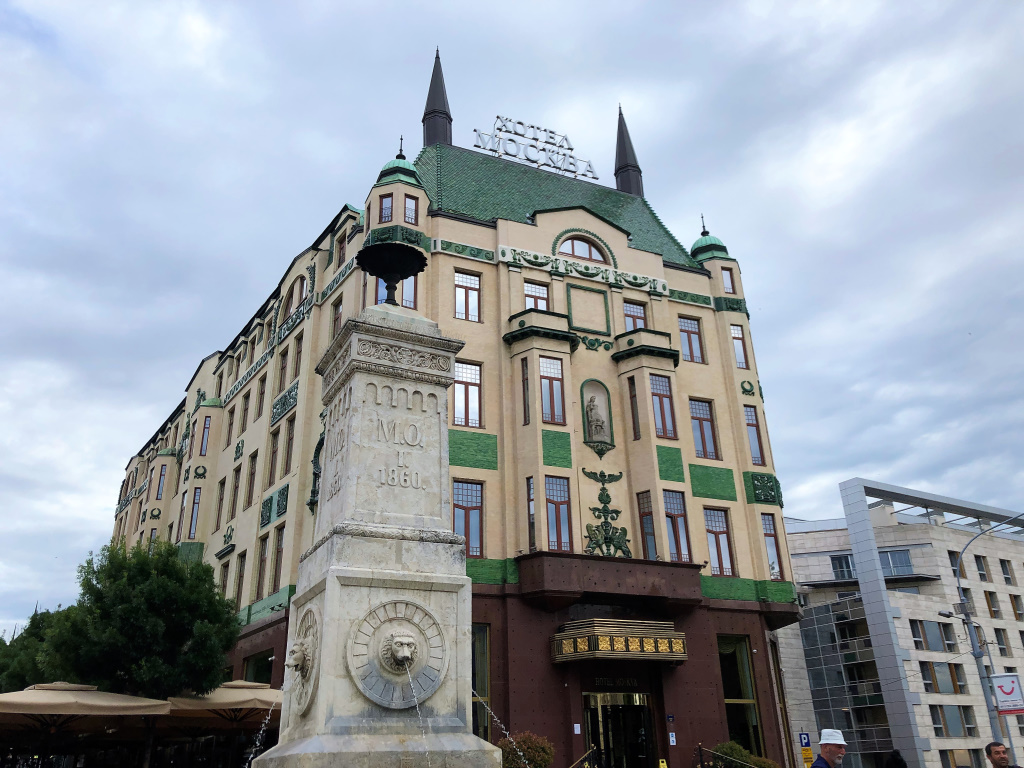 Belavia was the only airline still flying to Armenia, and conveniently had just resumed service to Serbia. So recently that when we checked in to our very full (and not-at-all socially-distanced) flight in Yerevan↗, the ticket agents had a hard time believing our itinerary was going to work. They reminded us in no uncertain terms that by leaving Armenia, we accepted the risk of being turned away at our destination with no hope of return. 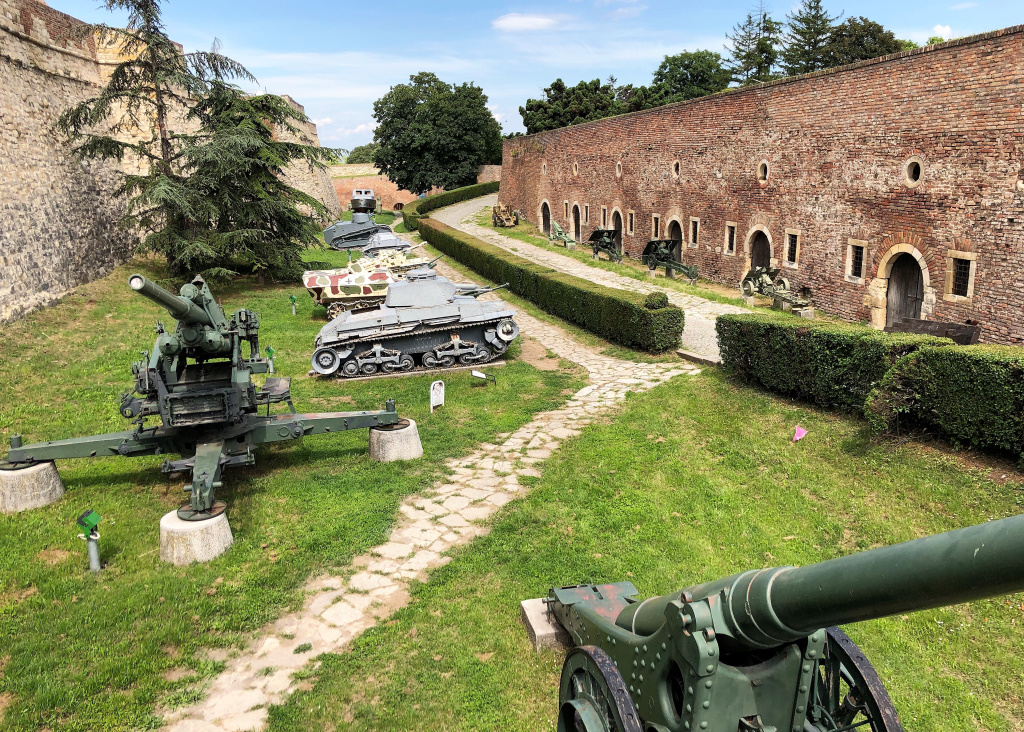 They needn’t have worried. Serbia’s border guards stamped our passports without question. Finding a good rental was not as easy as entering the country, however. We stayed in four different Airbnbs↗ in just four weeks in Belgrade. All underwhelmed. They were variously dingy, grungy, buggy, or just plain bad. Even so, Belgrade was surprisingly charming. What looks like endless concrete and imposing apartments from a plane feels a lot more vibrant and human on the ground. 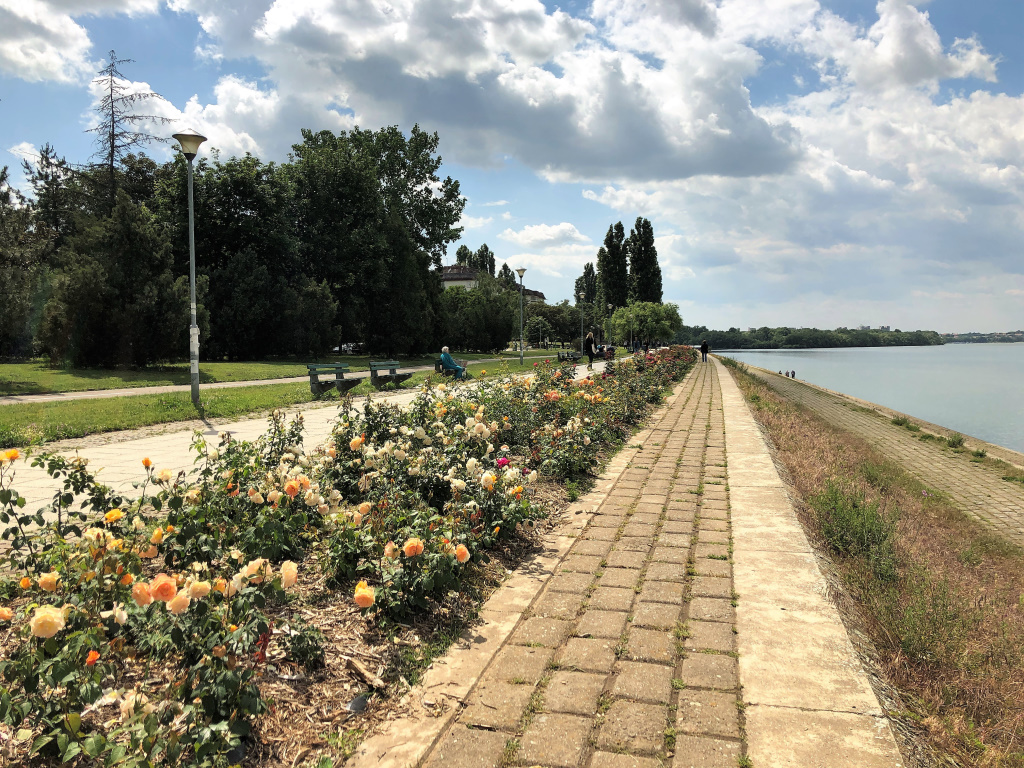 Our favorite haunts were the paths along the Danube and Sava rivers. The well-groomed walkways stretched for kilometers and boasted floating bars, restaurants, and cafes. We cherished our long summer strolls after weeks of tightly-monitored lockdown. 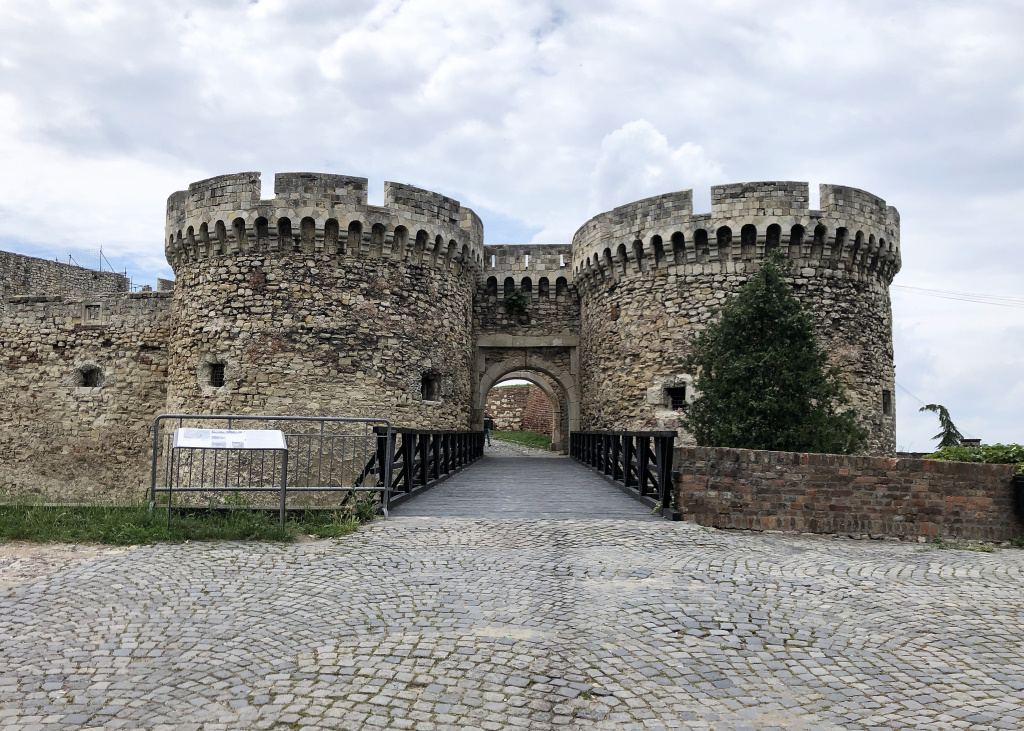 The river walks led right past Kalmegdan Park and Belgrade Fortress. The park sprawls around and into the fort, forming a sort of giant front lawn for the city. People gather here to picnic, play sports, and let kids burn off excess energy. It has to be one of the best-used old castles in Europe, actually enjoyed by its citizens and not just surrendered to tourists and sightseers. 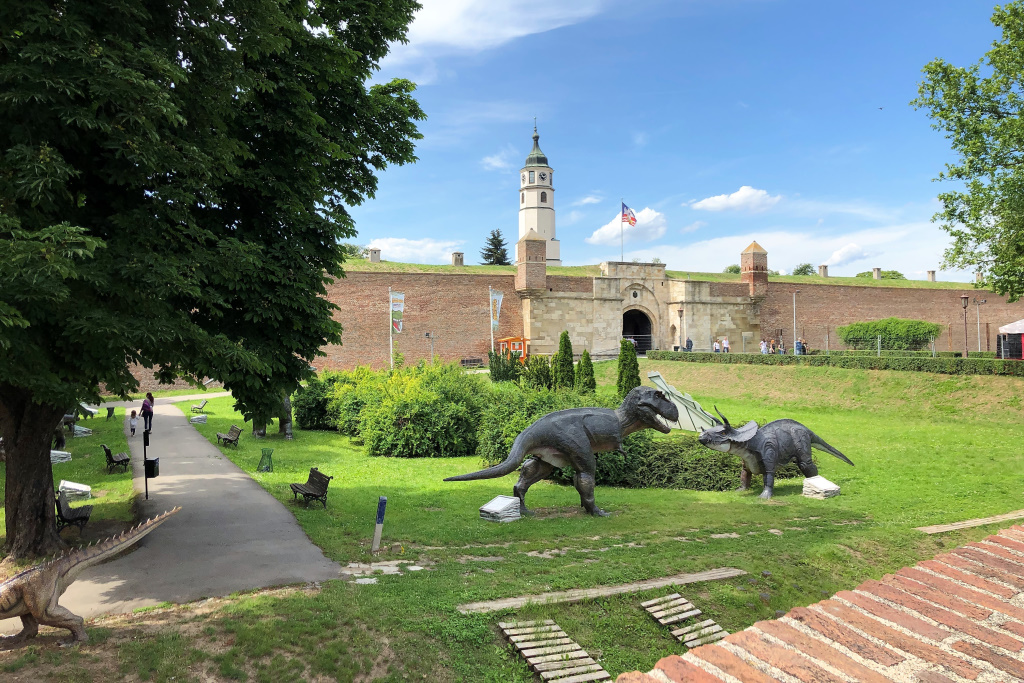 In addition to the usual war museums and ice cream stands, Belgrade Fortress was full of surprises. Dinosaurs roar and flex like Jurassic Park animatronics. An underground museum once served as a dance club in the more nihilistic post-Yugoslav breakup era. Now it has been restored and preserved. The city is still (in)famous for its parties, but for our stay Covid put most shenanigans on hold. 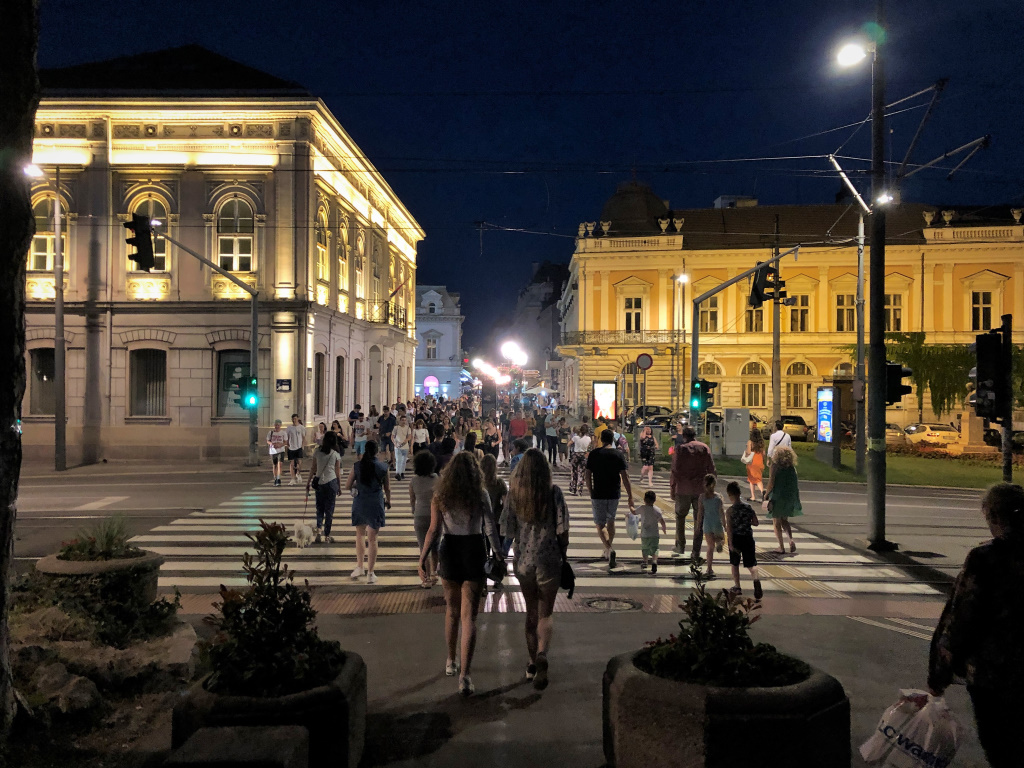 In many parts of the city though, Covid was hardly a concern. The busiest pedestrian street remained Kneza Mihaila, crossing from the fortress to the center of Belgrade. Crowds shopped and dined out here with abandon. We cautiously dipped our toes too, sampling local brews at bars like Krafter that had spacious outdoor seating or grabbing some very good gelato for the road. It was a complicated dance between protecting ourselves against the virus and savoring any taste of normalcy we could find. 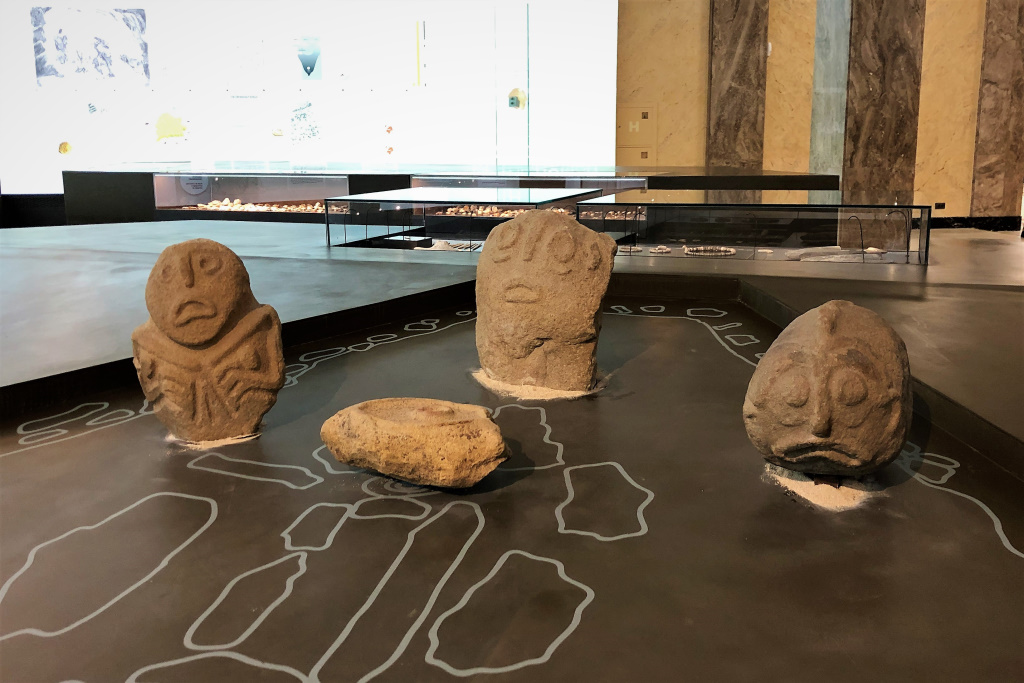 At Kneza Mihaila’s opposite end sits Republic Square and Serbia’s National Museum. Belgrade’s museums took surprisingly (and reassuringly) strict precautions. Staff and guests wore masks, temperatures were checked at the door, and only a handful of people were allowed in at a time. The museum spans the gauntlet from ancient antiquities to Communist-era art to banknotes from 1990s hyperinflation. Despondent stone faces seemed to capture the general mood, but a nearby duck chariot brought us back to smiles. 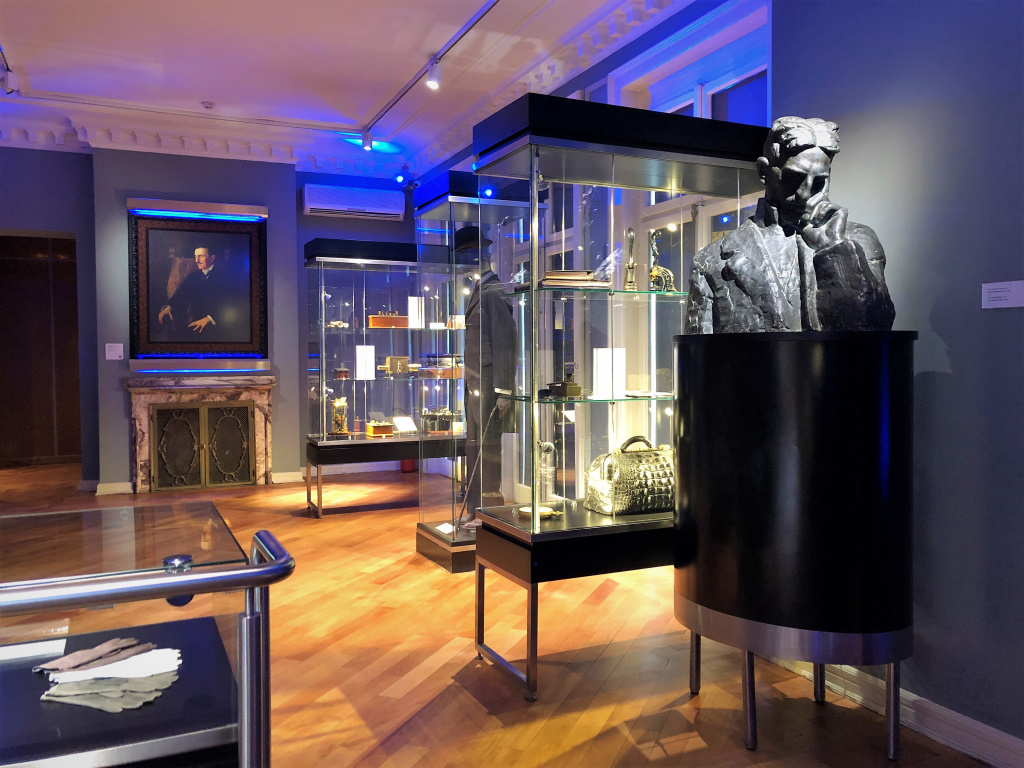 Serbia stakes perhaps to most fervent claim to the multicultural Nikola Tesla. They have a fairly new museum dedicated to the inventor, but it makes for a pretty modest visit. There wasn’t much to see beyond a few personal possessions, examples of his experiments, and his ashes interred in a gold-plated sphere. 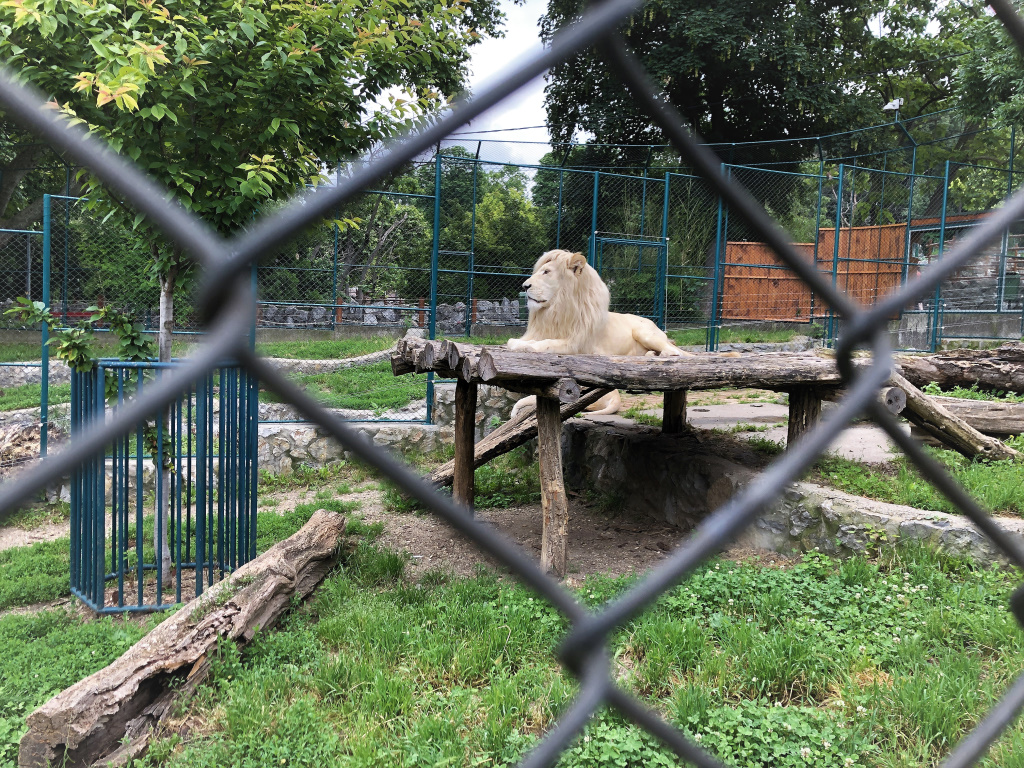 After two weeks and two disappointing apartments, we decided to roll the dice on change of scenery. Novi Sad played a good host back in 2017↗, maybe it would rescue us from our cursed string of accommodations? On the way out the door we killed some time at the Belgrade Zoo. It was a nice way to spend an afternoon. In addition to the expected regal big cats, we saw less regal geese, an alligator that survived World War II, and some very playful wolves.

Read about our stay in Novi Sad↗, then return for Part Two of our time in Belgrade. 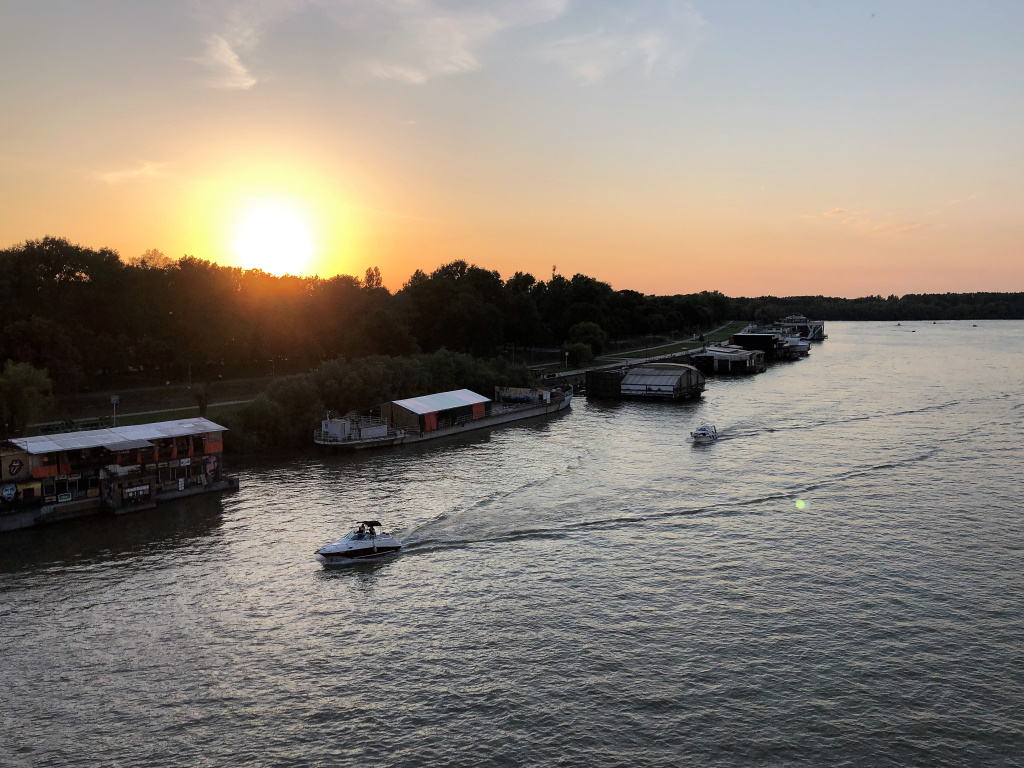 The day we returned to Belgrade saw a marked increase in Covid cases. A large tennis exhibition and other loosened restrictions had taken their toll. Speculation grew that the government had also doctored the Covid numbers (ba-dum-tsh) in run-up to the recent election. But the epidemiological situation doesn’t abide lies for long, and restrictions were back on the menu. Masks were again mandatory inside public buildings and shops. 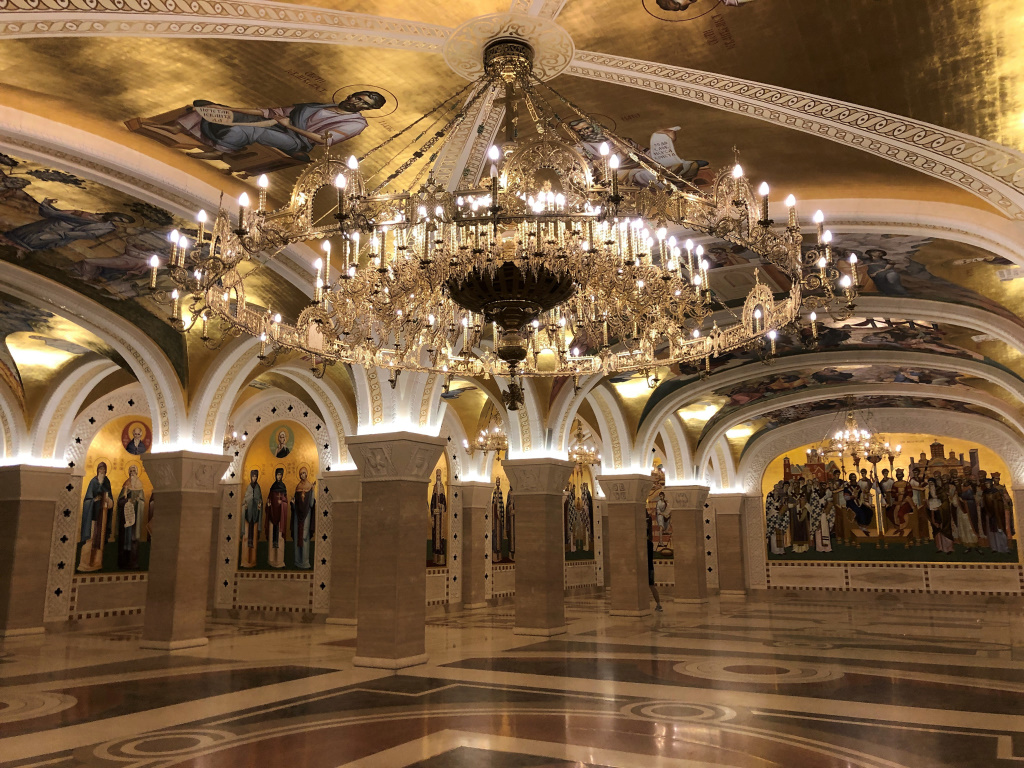 We were glad for the changes, and kept to ourselves while still seeing what we could. One such stop was a peek into the Cathedral of Saint Sava on a quiet weekday afternoon. This church is in many ways the Orthodox counterpart to La Sagrada Familia↗. Both are strikingly ornate and are as yet uncompleted (though Saint Sava is nearer to being finished and has only been under construction since 1935). The finished sections were dazzling displays of gold and iconography. The images are new but stylistically timeless. 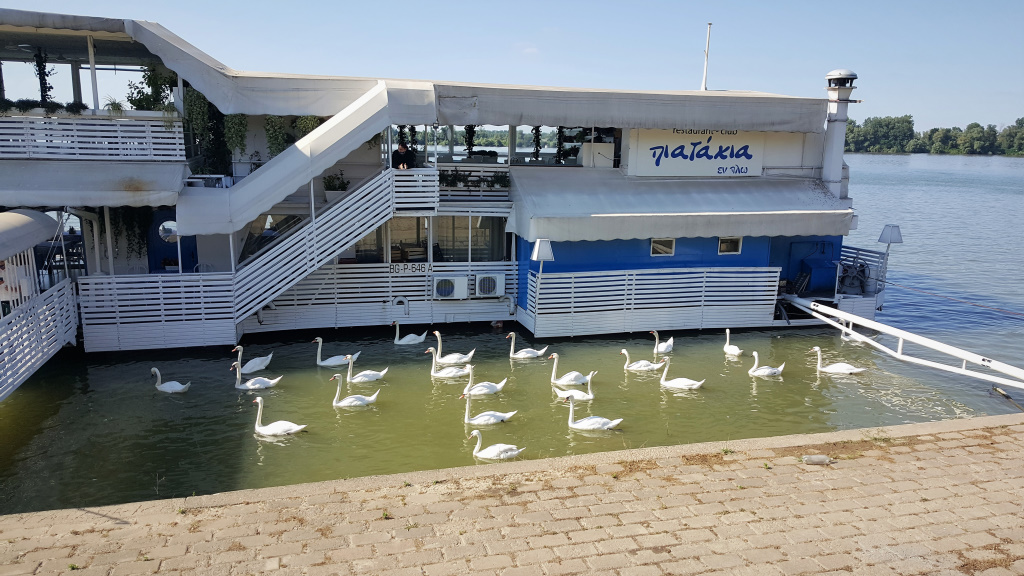 Even though our apartments this time were further from the river, we frequently ended up there anyway. Cygnets grew from tiny puffballs of our last stay to little gray copies of their parents. At times, heavy rain flooded the banks with logs and debris. We enjoyed it regardless. Crossed the Sava allowed us to experience Prijateljstva (Friendship) Park. Hopefully Belgrade continues to preserve their stunning and inviting riverfront… though new apartments going up in Savamala hint at coming changes.

Eventually, summer heat and mosquitoes dampened our love of the boggy banks. The stinging beasties were aggressive, and numerous. We started to curtail the time we spent at water level in favor of breezier, less-contested altitudes. 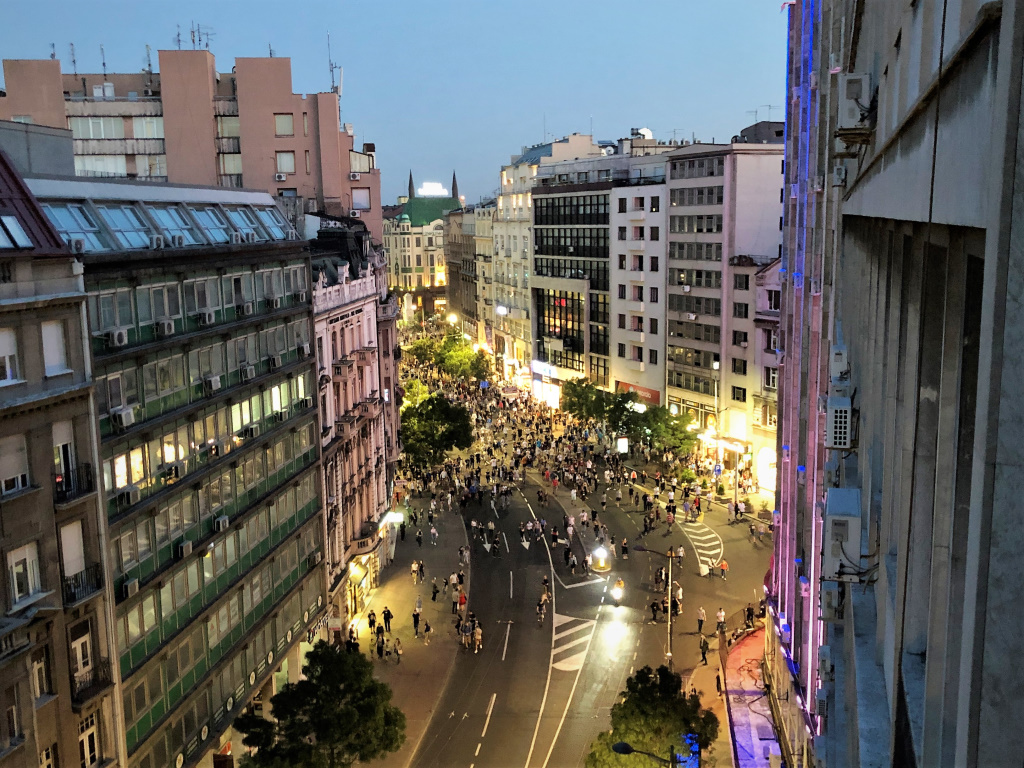 Our final night in Serbia was more interesting than most. Protests over various government wrongs – mishandling of Covid, allegations of election fraud, consolidation of power by the president – came to a head as police pushed back crowds that gathered near parliament. Our apartment looked down on a sea of people streaming away from police blockades and tear gas. We could feel our eyes burn even from a dozen stories up. Thankfully this night’s events brought few reports of injuries. 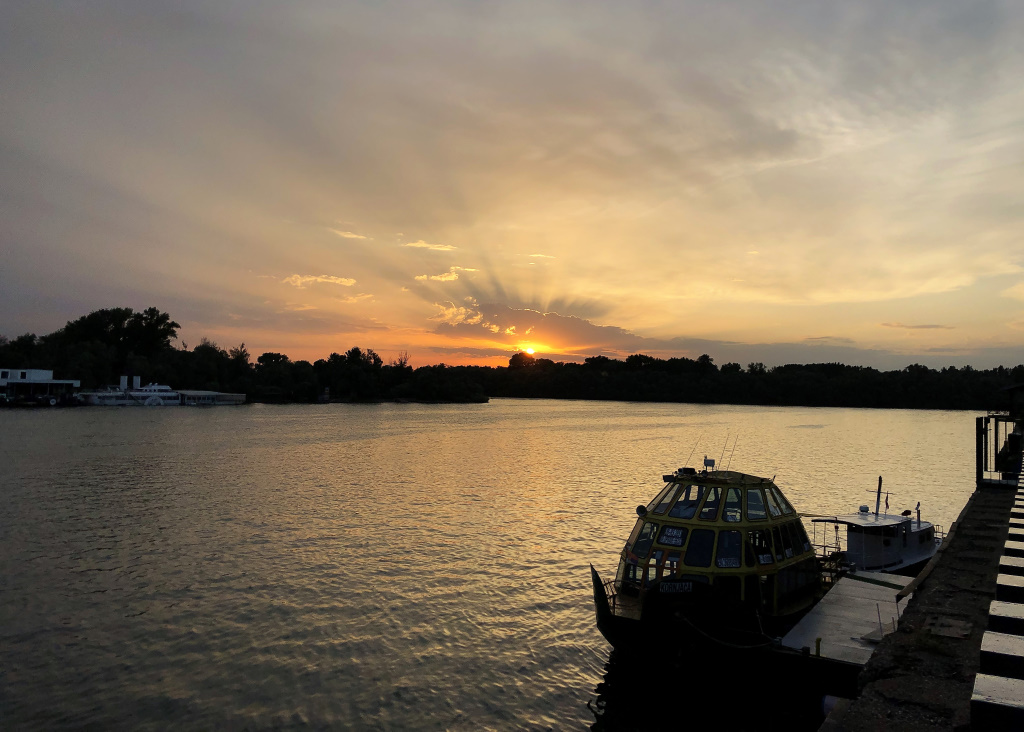 We left for the UK on the first day of their new European “safe travel” corridors, grateful for our time in Serbia but also looking forward to better luck with Airbnbs and anti-Covid measures. At some point when the pandemic is in the past, Belgrade will be on our list to revisit. It charmed us in both appeal and hospitality. And in a year when our passports were more of a liability than an asset, being welcome counted for a lot.