The Capital of Transnistria 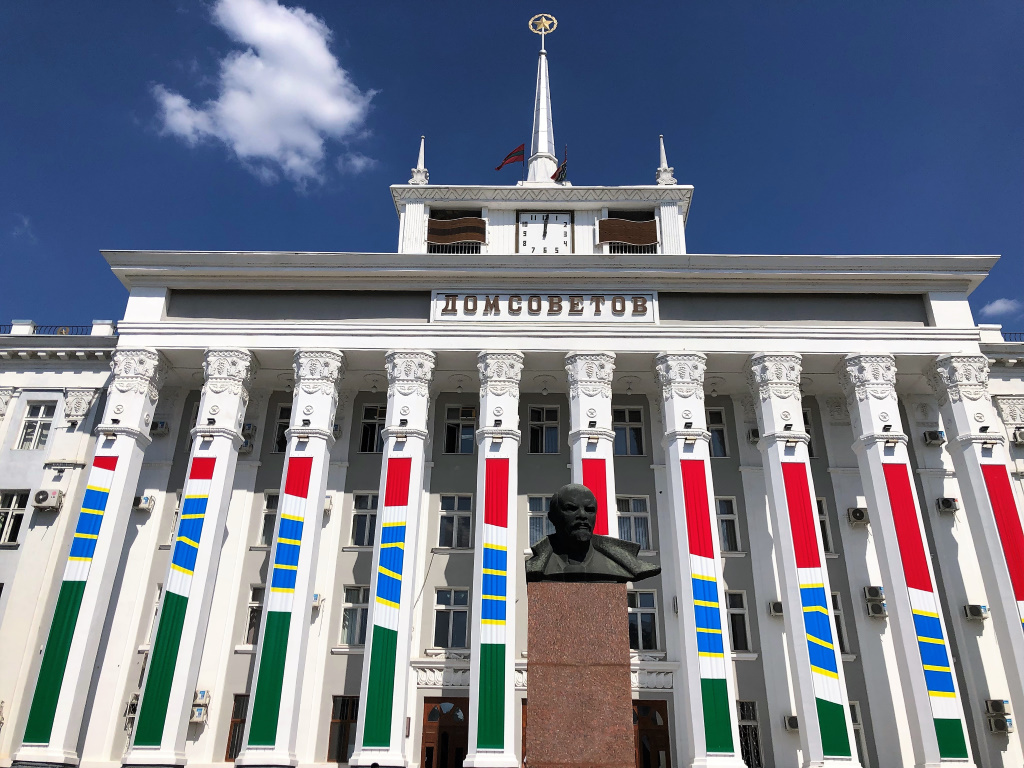 Inside Moldova’s borders is another country. Or maybe not? Depends on who you ask, and where. West of the River Dniester lies the bulk of Moldova, an independent country since the collapse of the Soviet Union in 1991. The tiny strip on the other side of the river (trans Dniester – Transnistria) wished it wasn’t independent so hard it accidentally was even more. Identifying less with Romania than the rest of Moldova, they preferred to align eastward with Ukraine and Russia. As Ukraine itself westernized, that has left Transnistria in a precarious place, a tiny exclave of a long-defunct state. 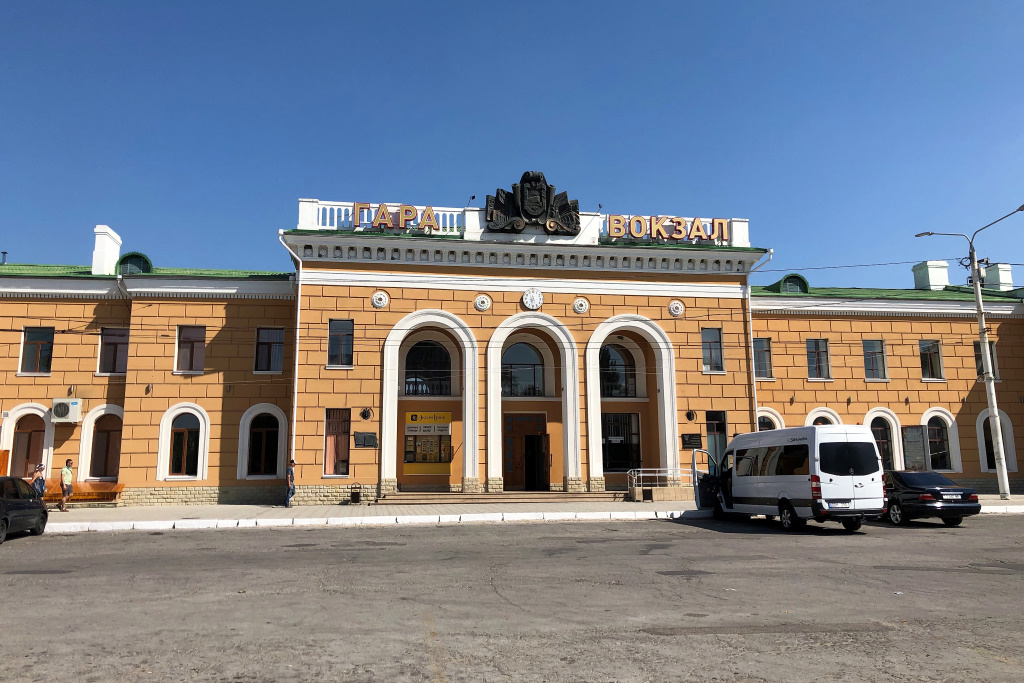 To get to the capital Tiraspol required a two-hour marshrutka ride from Chisinau↗. We crossed the border without without a check from Moldova, but the Transnistrian side had proper border guards and an entry station. They don’t stamp passports, but we received a receipt we presented to exit on our return. 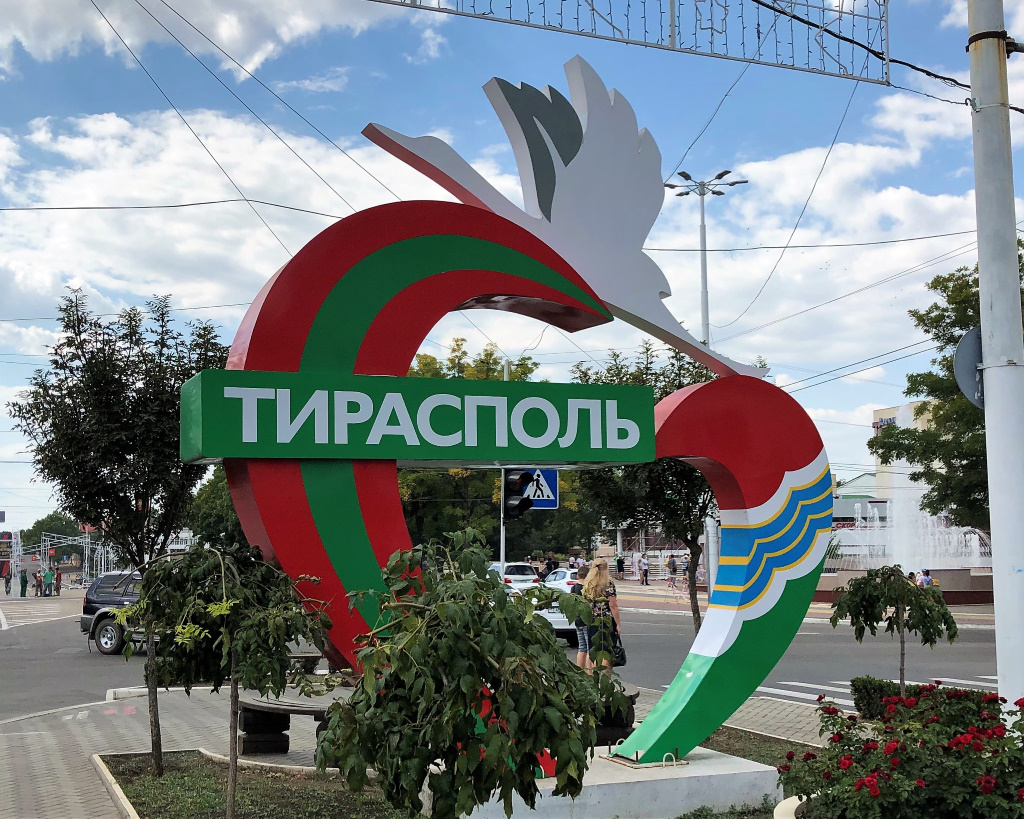 The marshrutka gave a nice tour through town on the way to the station. We weren’t sure what to expect from our second-ever visit to a breakaway region↗, but we found the city just as pleasant as Chisinau – nice parks, wide avenues, a relaxed atmosphere. 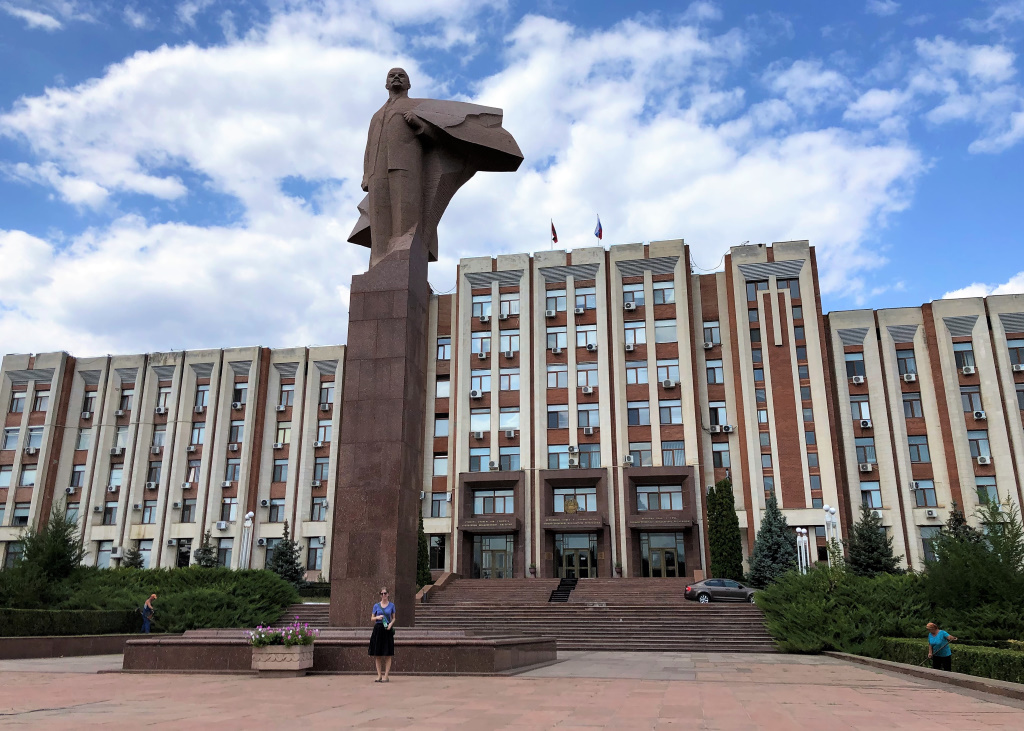 Not that there aren’t differences. The hammer and sickle on the flag for one, along with all the Lenin statues. Streets bear the names of Soviet leaders and holidays. A second official flag happens to be identical to Russia’s, supplementing the main one’s colors of green and red. Cyrillic is the script of choice, even for Moldovan (Romanian), which uses the Latin alphabet elsewhere. 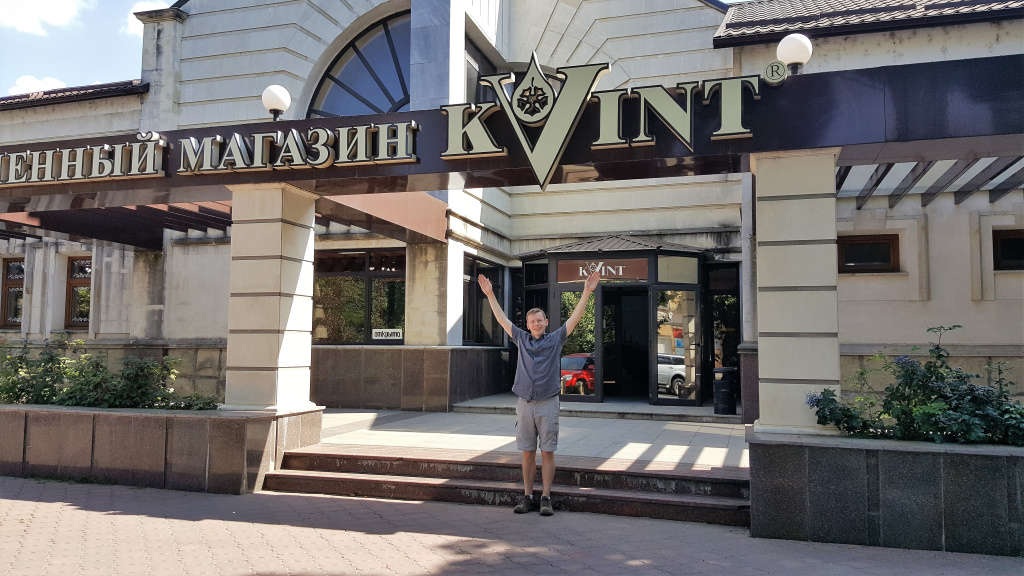 The socialist aesthetic is, these days, mostly for show. Capitalism is the main economic system, and one of the best-known (only known?) brands outside Transnistria is KVINT. They produce wine and divin (brandy). The distillery was hard to miss, just down from the tourist information office that hooked us up with maps and souvenirs. 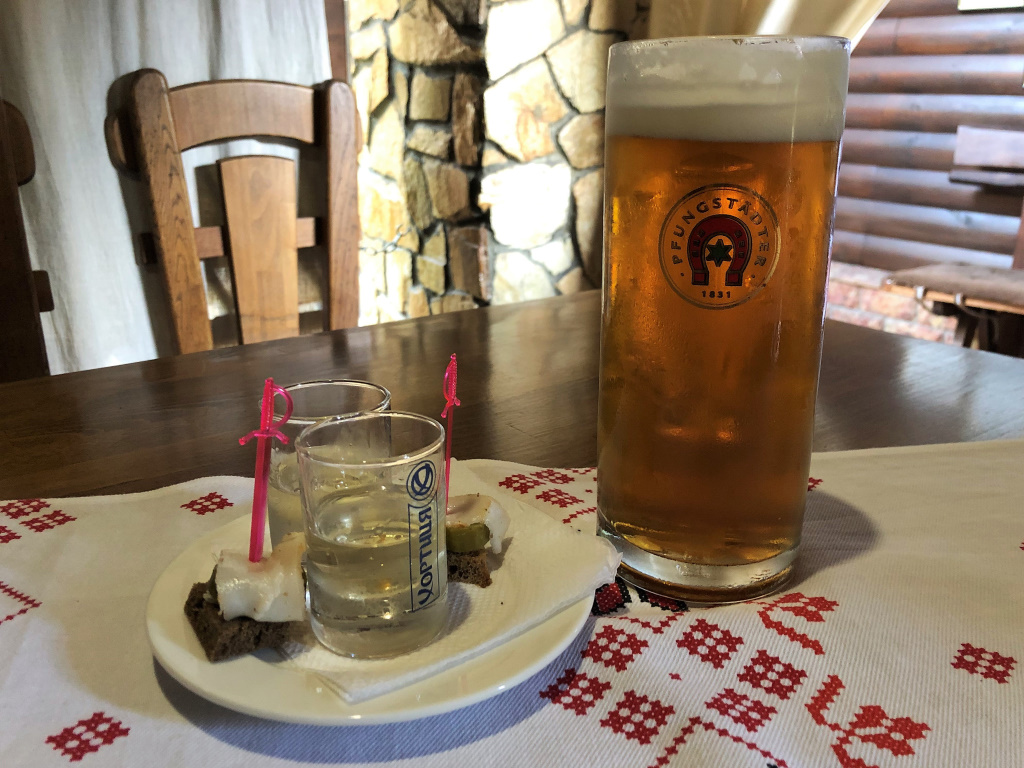 We lunched at Kumanek, possibly the nicest restaurant in town. A couple of shots of vodka made for a great appetizer, while the local beer was surprisingly one of the best we’d tried in the region. The wiener schnitzel-like pork cutlet was tasty and all, but their mamaliga was magical. 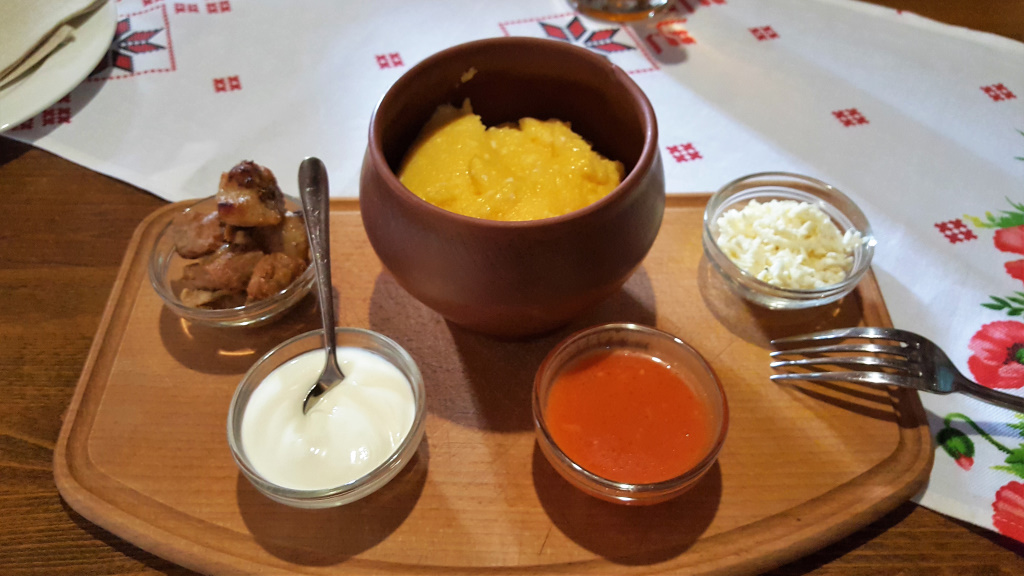 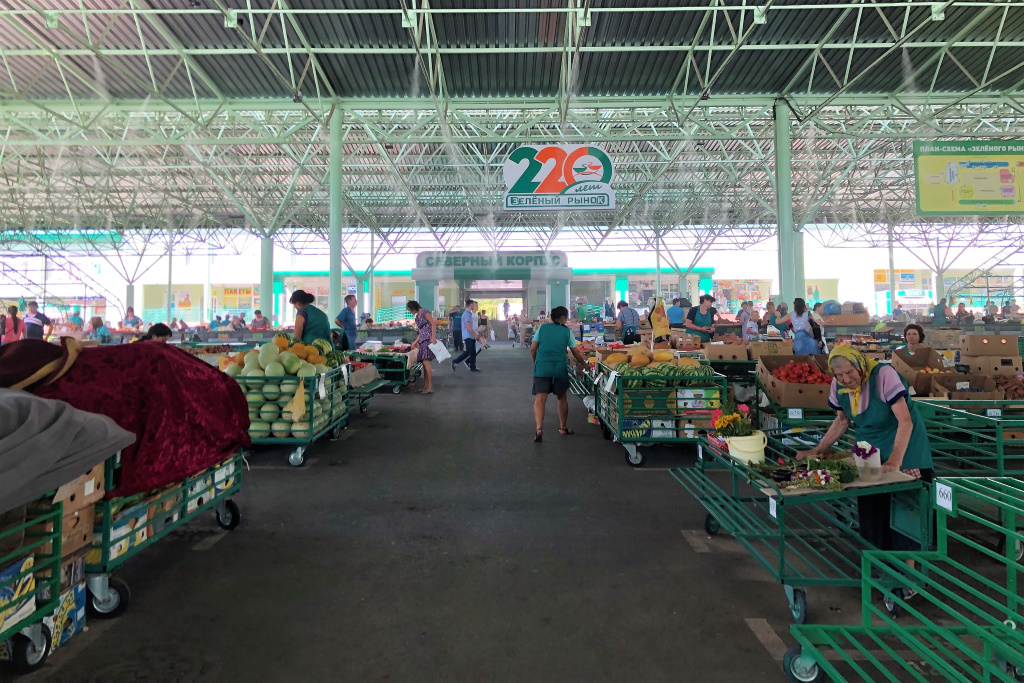 Possibly our favorite stop was the Green Market (fittingly housed in a bright green building). Grandmothers sold home-grown produce, local cheese, and bread. Shops circling the market floor sold just about everything else. 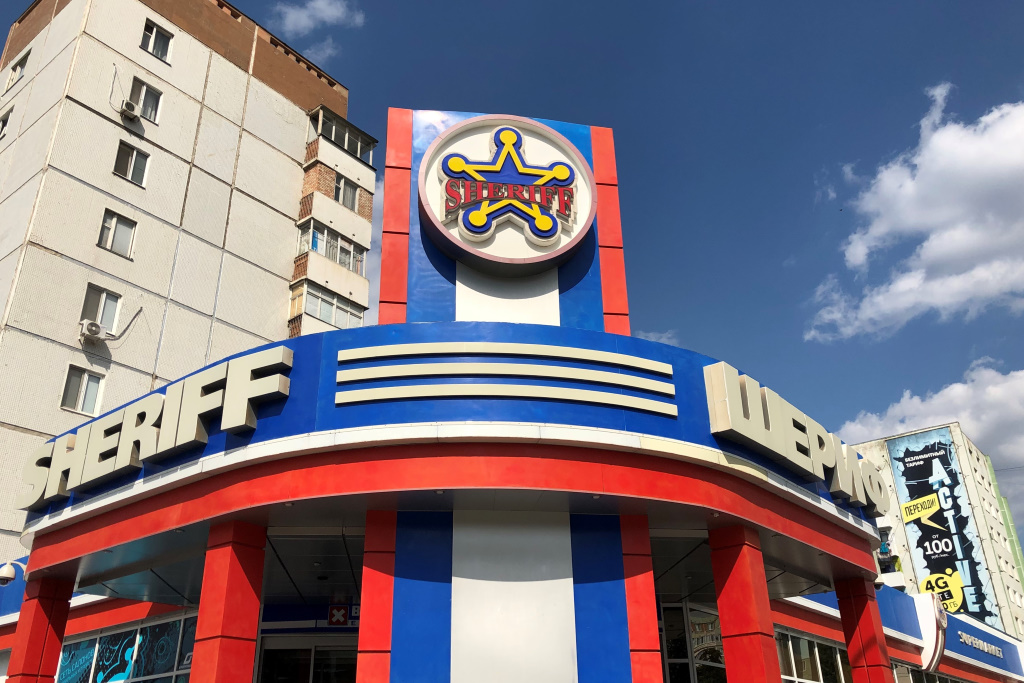 For a souvenir bottle of KVINT wine, we stopped at a Sheriff supermarket. The Sheriff logo shows up all over Transnistria – the company has its hands in just about anything that makes a profit, including the local sports team. Ah, capitalism. 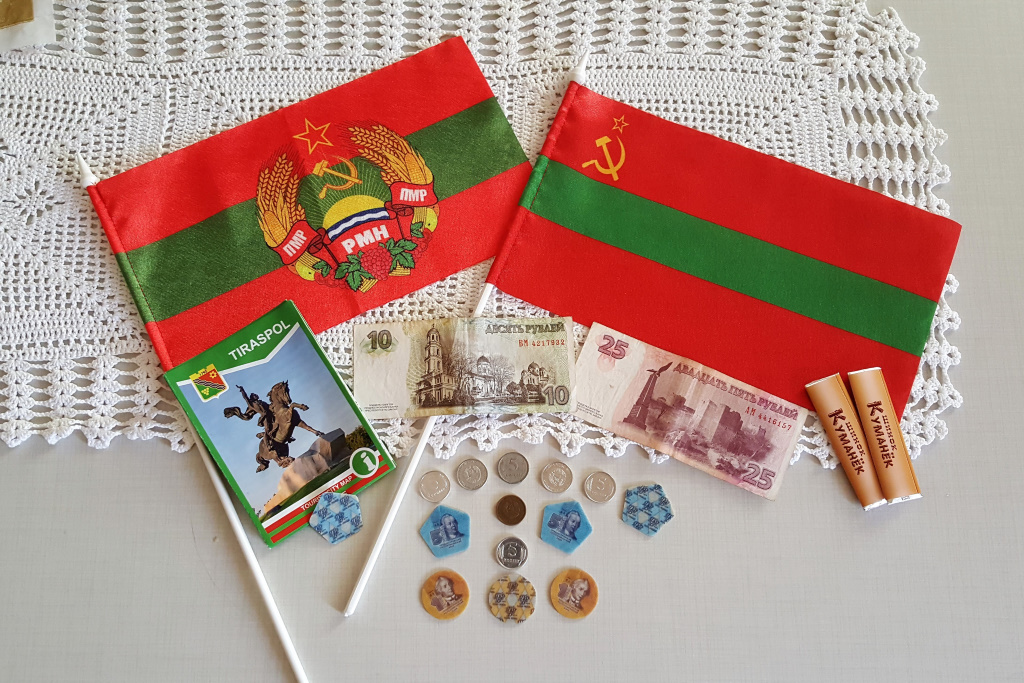 Our final task was hunting down plastic Transnistrian Rubles. We’d exchanged money after arriving, trading Moldovan leis and US dollars for a currency unrecognized anywhere else in the world. In addition to typical bills and coins, small denominations also come in plastic chits. These are odd shapes and more akin to pogs or casino chips than hard cash. Naturally, we needed some. Asking around for change at shops we came up dry. But we got lucky at the literal last minute, when the bus station attendant had some in his cash bin. He started making more normal paper change, but we insisted on the plastic stuff. Amused, he laughed at us but ultimately was happy to indulge our wish. (Interesting to note that despite the close connections with Russia, their ruble is pegged to the US dollar.) 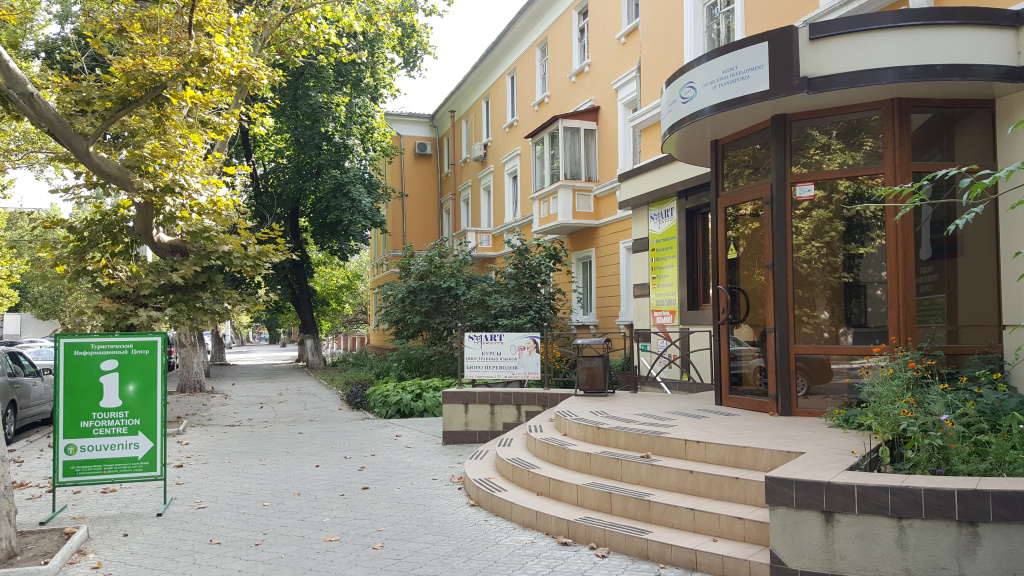 For all the oddities surrounding borders and money, it’s an easy place to visit. Tiraspol was welcoming and felt like somewhere we would happily stay longer. It was the last stop on our march east, from touristy Transylvania to unheard-of Transnistria. Every step of the way we came in half expecting our surroundings to grow bleak and depressing, but that wasn’t at all the case. More modest maybe. But life goes on here, just as it does anywhere else. Borders and breakaway regions are just a small part of that. Mostly people just want to be left alone. And that’s the story of Tiraspol. 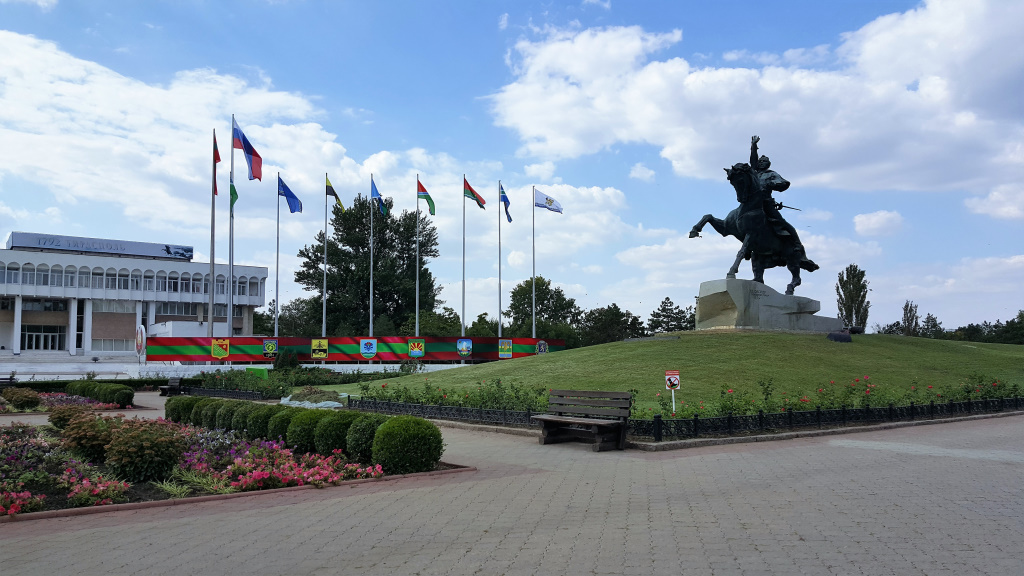