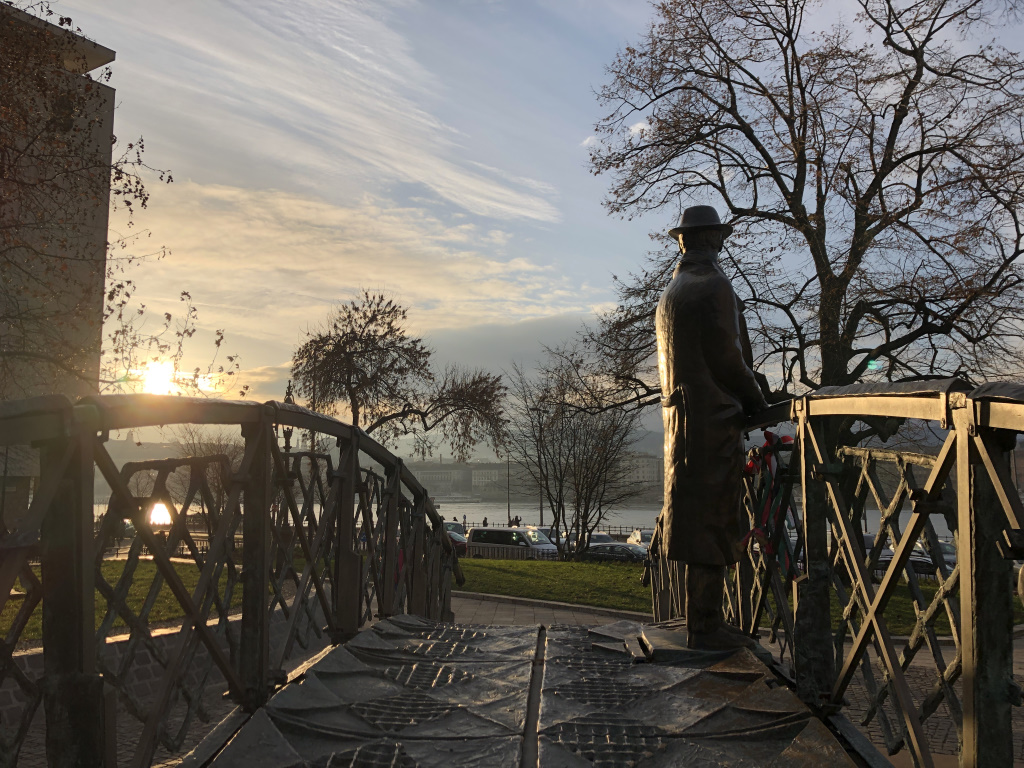 With Zagreb barred from running away with “Best Christmas Markets” again this year, the crown fell to Budapest. Naturally we made it our next stop. A few hours on a bus traded Croatia’s capital for Hungary’s, far more sprawling but no less festive. We’d already seen many of its highlights on our first visit way back in 2016. This time we skipped right to our favorites, now decked out for the holiday season.

This post is about our 2019 visit to Budapest. Read about the original 2016 stay here↗. 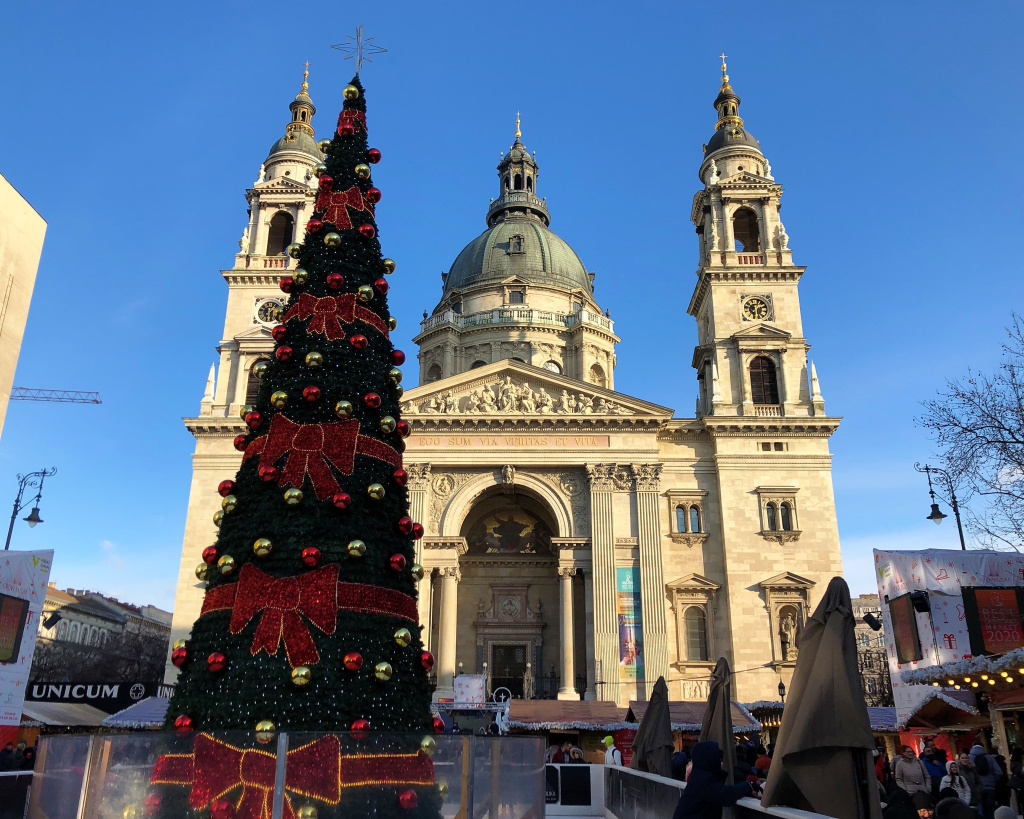 Since we arrived on December 18, Christmas markets were in full swing. The largest market was directly in front of St. Stephen’s Basilica. It was a bit of a walk from our perfectly adequate Airbnb↗ on Mátyás Tér. The wintery weather was fine for strolling during daylight hours, but on chilly nights we were glad for the many strikingly decorated metro stations and happy tram lines. 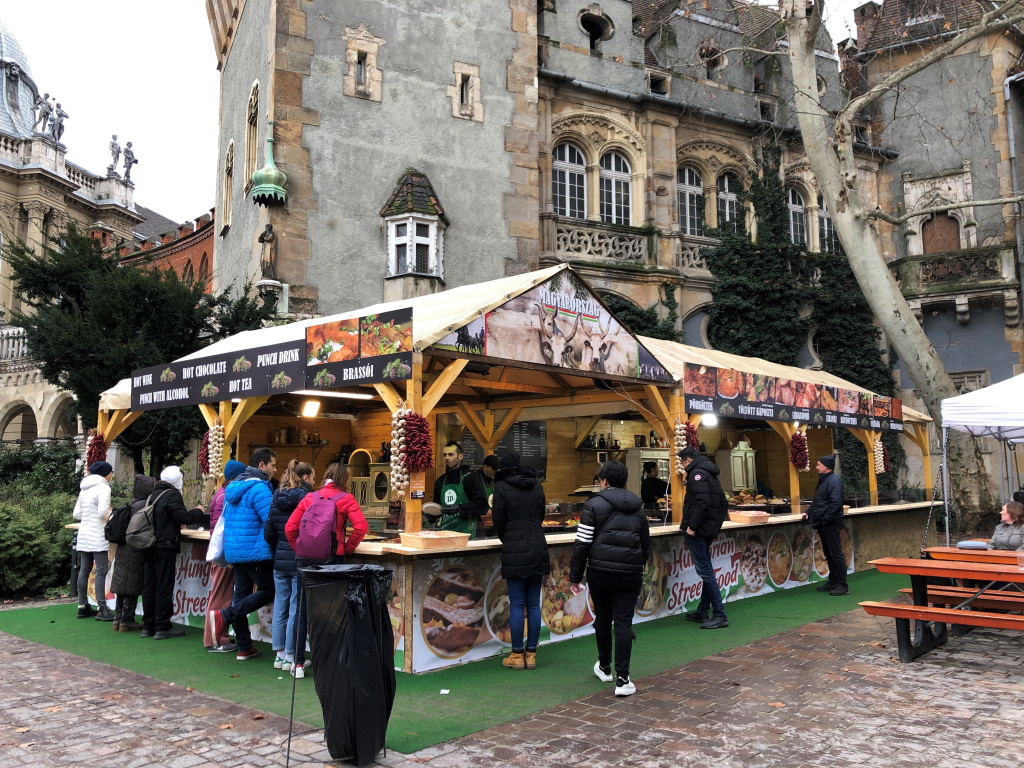 Larger Christmas markets often had huge buffet-esque booths selling all the traditional winter foods. These were far more impressive spreads than the ones in Zagreb or even Nuremberg↗. They featured steaming pots of hearty soups, plates of pork knuckles, and several kinds of sausages. Hungarian dishes popped up on the menus too, bowls of goulash and freshly prepared lángos. Nearby we were sure to find mulled wines and hot chocolates to smooth away the sharpness of winter’s chill. 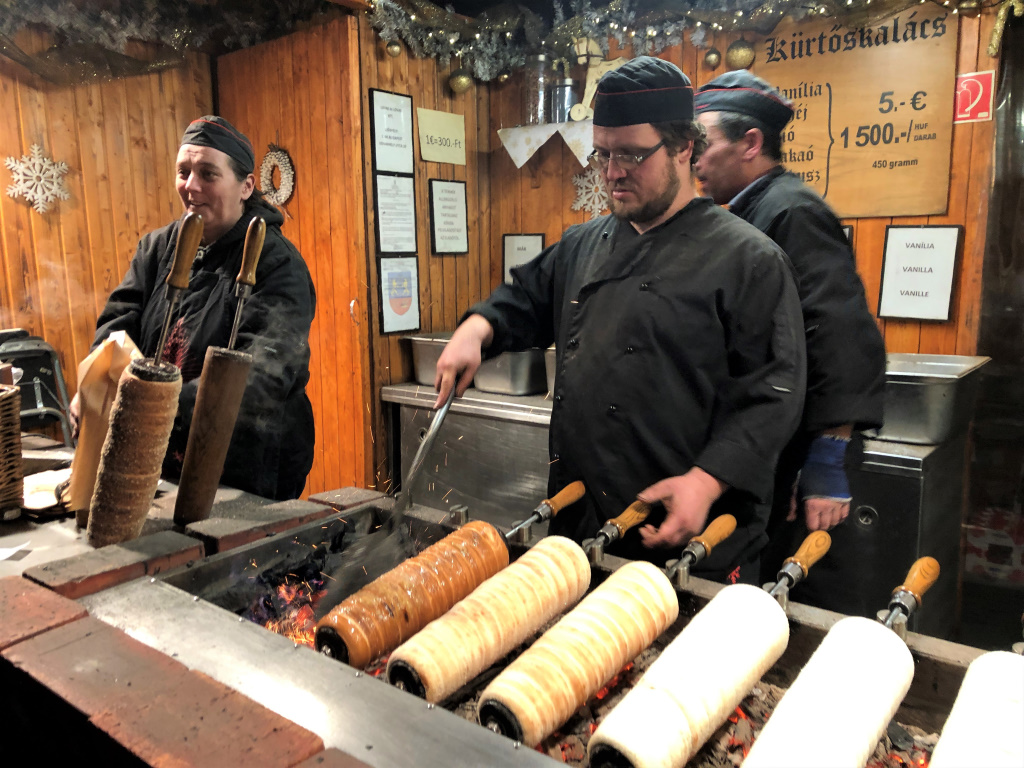 The quintessential dessert was Kürtőskalács, also called chimney cake. The best came still steaming off of open coal braziers. We’ve had similar treats in Prague and Vilnius, but the ones in Budapest stood above the rest. 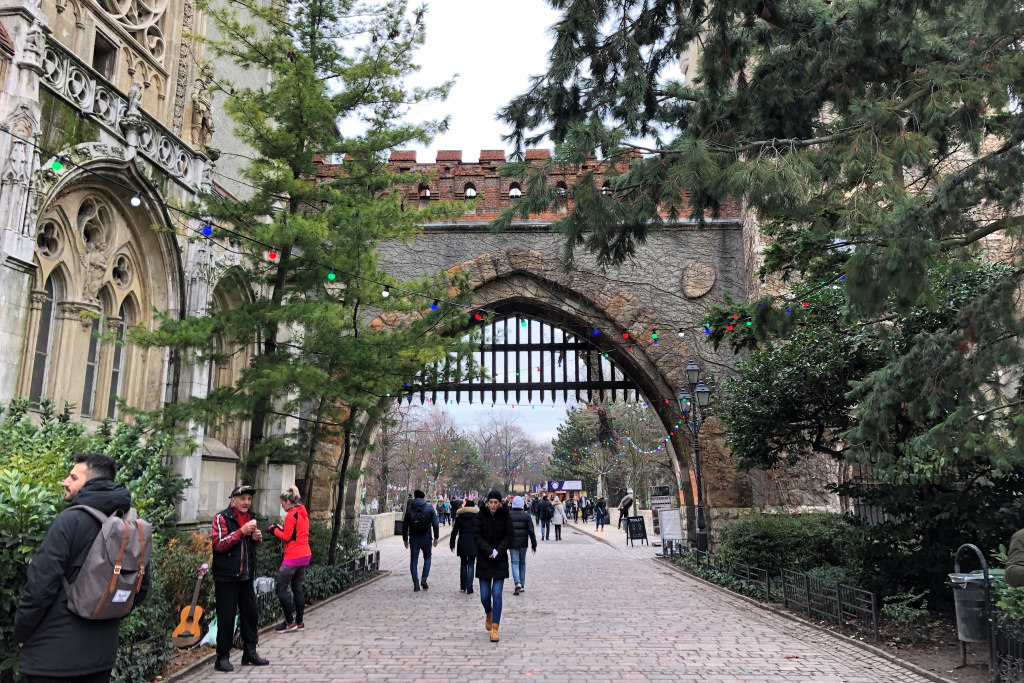 Vajdahunyad Castle was one of the spots with its own small market. Though the building does not have an ancient history like Buda Castle, it certainly looks as if it should. It was inspired by other castles in the region, namely the one we visited in Hunedoara↗. An international food festival was taking place just outside its gates. The dining options on offer were impressive, but we still gravitated back to the mulled wine. 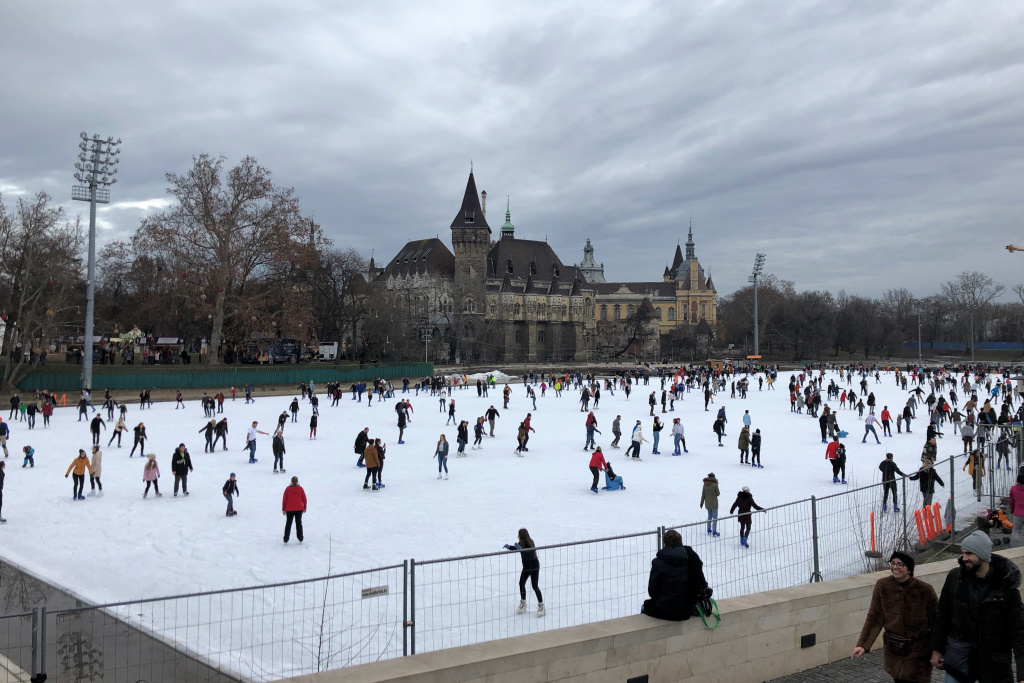 During summer the castle sits next to a shallow, man-made moat filled with paddle boats. In colder months the water transforms into an ice skating rink. And when that gets too cold, the thermal waters of the Széchenyi Baths are just across the park. 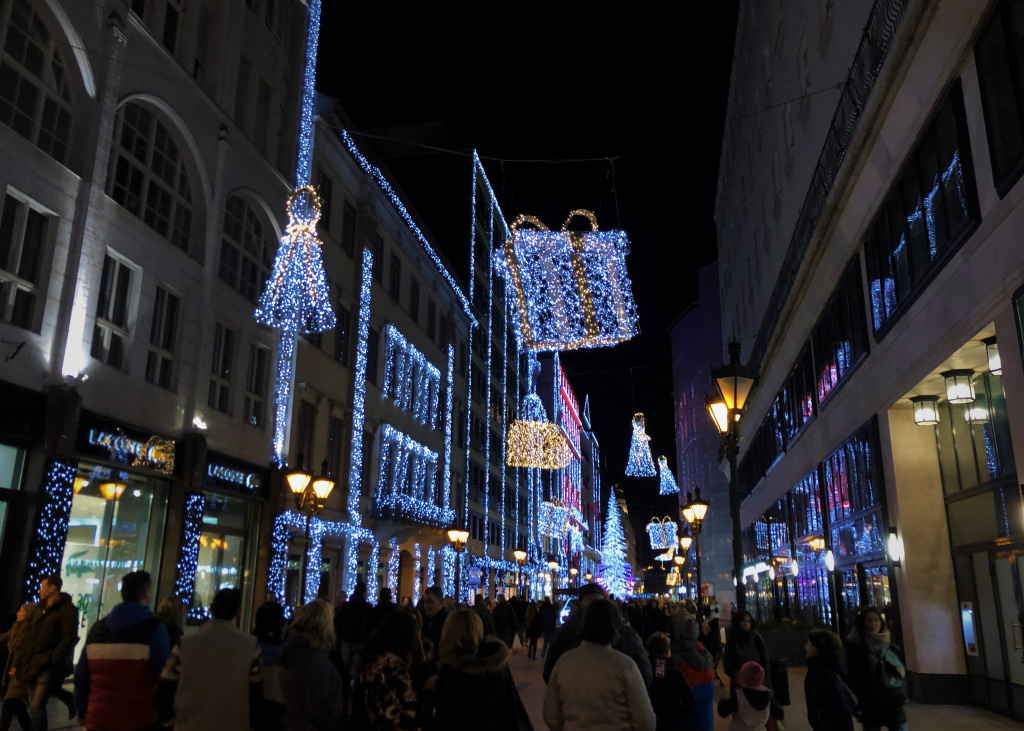 The city’s holiday lights were not as unique as Ljubljana’s↗. Budapest decorates more traditionally with trees and presents and framed buildings. But they also had other ways to make nights cozier, like lit up book wagons dotted around the streets. 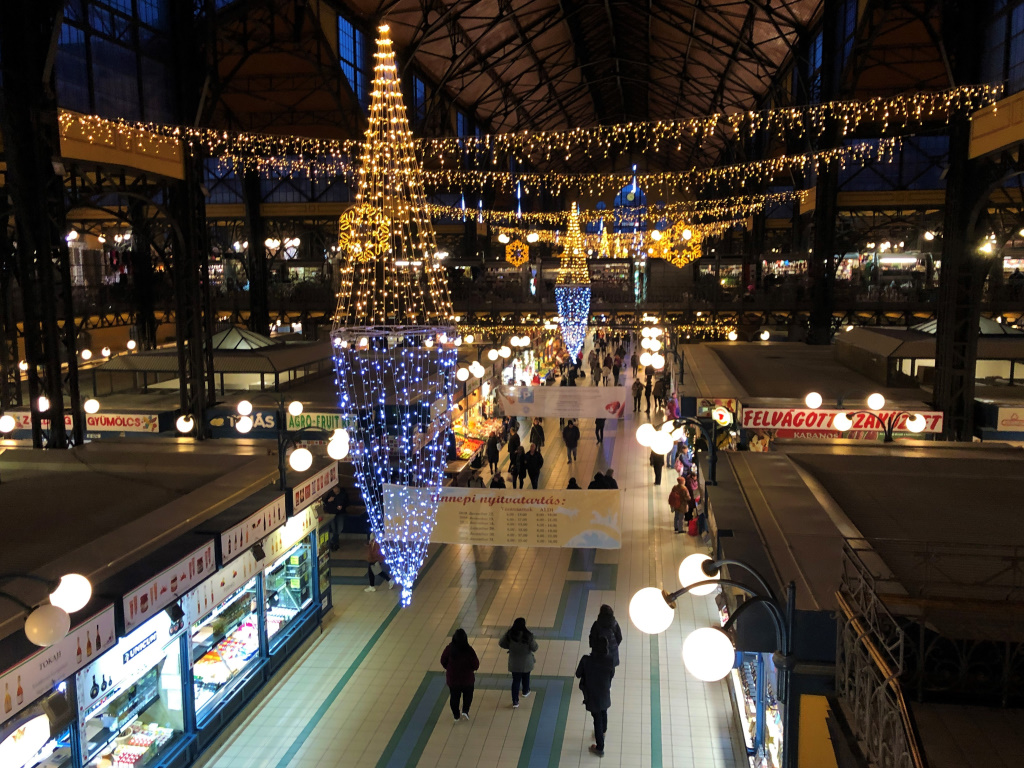 To get ready for holiday dinners (Hungarian paprika anyone?) we visited the Central Market Hall. Some vendors get in the spirit of capitalism in addition to that of Christmas; restaurants here definitely overcharge. Thankfully local markets at Teleki Tér and Rákóczi Tér had none of the surge pricing. The best find was a wine vendor in a corner of Rákóczi with very cheap, very large, tasty bottles of red. We also got into the shopping spirit and visited a mall to find small, packable gifts. We were not alone. The best purchase may have been a pack of Walker’s Christmas Dinner chips. They are apparently a UK holiday tradition and were better than we expected.

Following the river from the Market toward the center is one of our favorite walks. The architecture on both banks is grandiose. City cruises boats ply the river to showcase the views. The impressive lineup includes the Citadel, Buda Castle, Fisherman’s Bastion, and towering churches leading to the Hungarian Parliament. 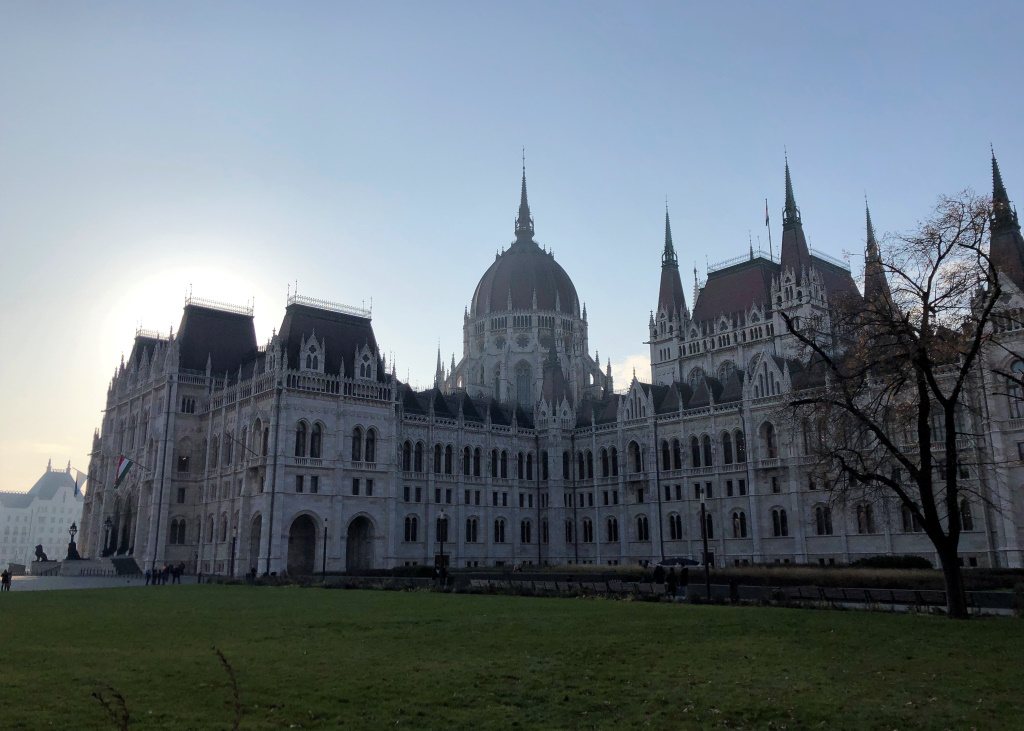 Parliament is certainly Budapest’s most famous building. It has no bad angles. From its dome and peaked roofs to its massive size, it looks like a Gothic novel setting. Nearby is a memorial to Jewish victims murdered by the Arrow Cross in World War II. Empty bronze shoes line the riverbank, a testament to the thousands murdered and dumped in the Danube’s waters.

The Buda side of the Danube possesses the best views. Fisherman’s Bastion or the Castle provide great sunset vantages. Just at the bend in the river from this view is Margaret Island. It’s everyone’s strolling spot and the prime place to try out newly-gifted bikes and rollerblades. Paths circle the island and lead to gardens, ruins, and lawns. Nearer our apartment, Kerepesi Cemetery provided a more solemn spot for walking when we didn’t want to cross the city. 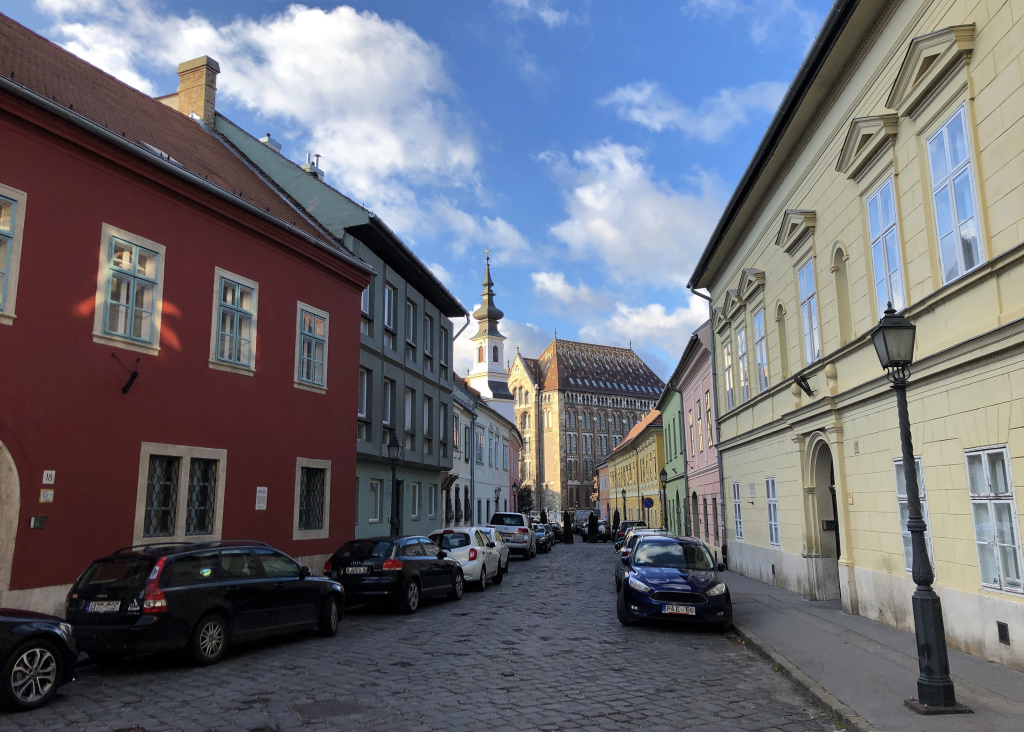 The streets of the upper town are among the prettiest in the city. We went on a calm day, when many people were spending time with family. Pastel painted buildings line quiet streets. It felt more relaxed than the Pest half of town.

Christmas as nomads can be a trade off. While the city settings can be wonderful, things are generally less impressive at home. This year our Christmas tree was a single branch meant for a Nativity or fireplace accent. Our Advent calendar was also a cobbled-together affair, but at least held quality candy. 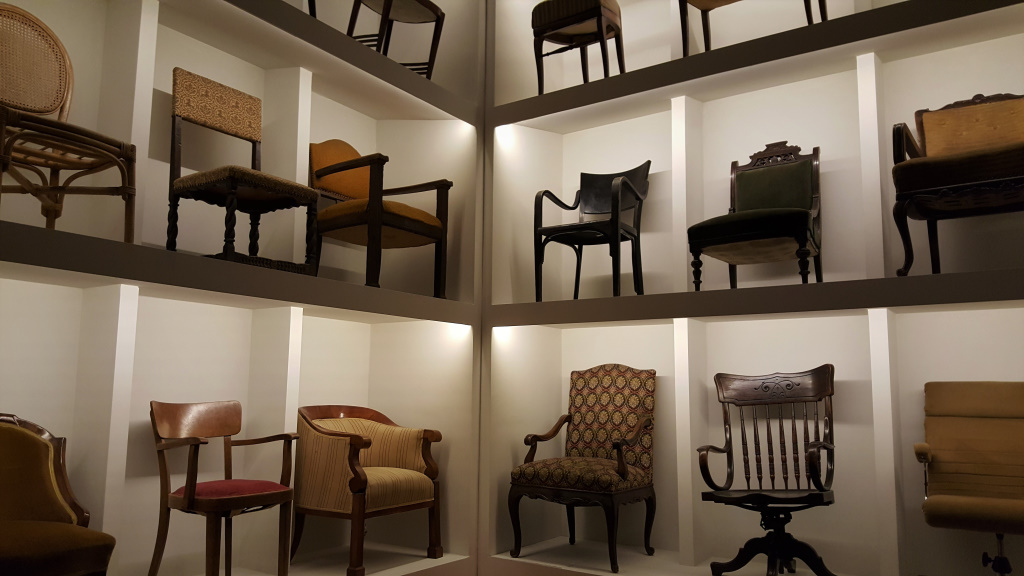 Back in the lower city, one sight we failed to see on our first trip was the Literary Museum. The exhibits focus on Hungarian authors and poets like Sándor Petőfi. Not a lot of Hungarian literature gets translated into English, so the information the museum presented was all new to us. The most interesting collections were of authors’ chairs and desks. The variety was striking. Artists can make do with just about anything!

Just a few blocks away is the heart of Budapest’s bar scene. After WWII ended, parts of the destroyed Jewish Quarter were not rebuilt for decades. The partially demolished buildings eventually became eclectic bars and nightclubs. Among these ruin bars Szimpla is now the most famous. At least a dozen individual bars fill every cavern and corner. We picked out wine and Liquid Cocaine and got to enjoying the surroundings. 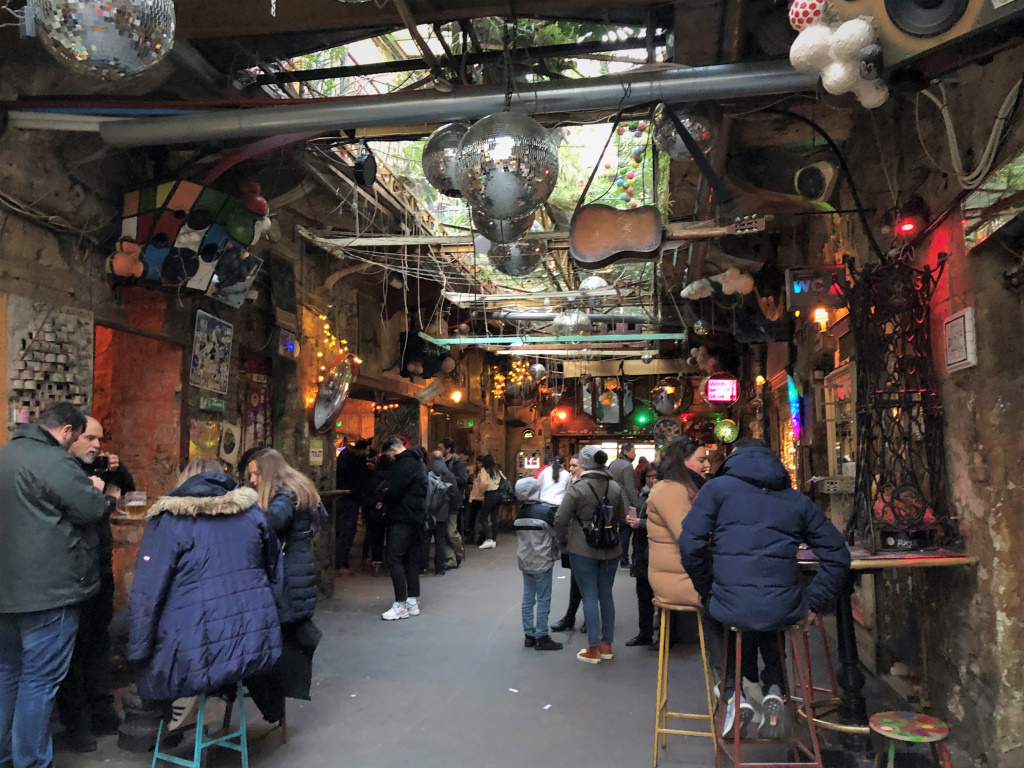 The space is made for exploring and not just drinking. The inside is covered in graffiti, art, broken down objects, and plenty of seats and tables, both traditional and makeshift. Many visitors put their touch on the decor by adding their own names and drawings. Apparently we were not the first Kevin and Danielle to visit. Who were these others? Time traveling copies? Perpendicular nomads also living on the road? We want answers! 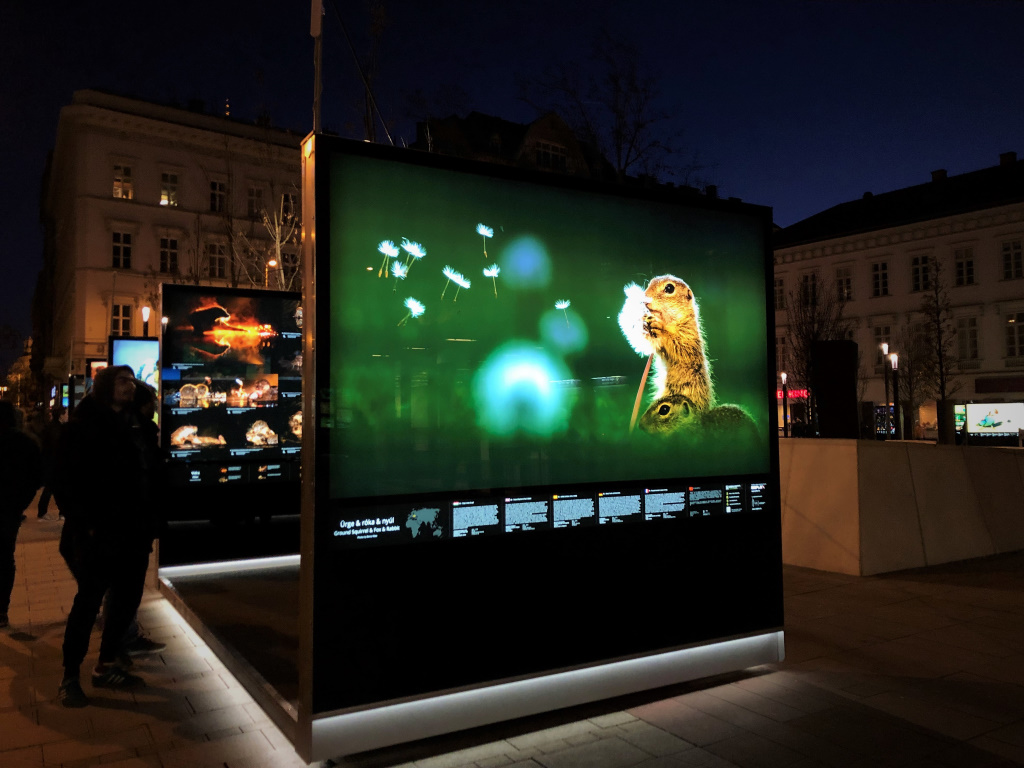 Art is also found out of the bars in just about every square and at every intersection. Most of it isn’t as new as the lightboards of adorable animals. Many are somber statues of leaders and heroes. But sometimes we stumbled across a work that encapsulated our own feelings so perfectly it was a shock. 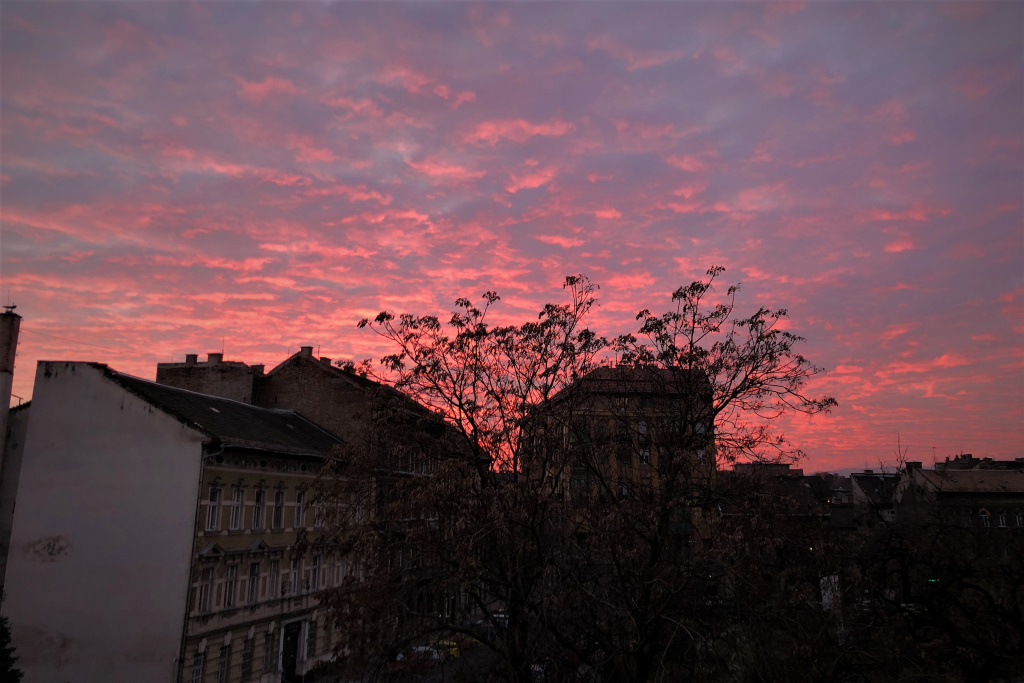 The last day of 2019 ended with a brilliant sunset. A few hours later, we rang in 2020 with sporadic neighborhood fireworks. Unlike many cities, Budapest forgoes a central New Year’s firework display. Everyone buys their own instead. Then families and friends gather to light them off in at midnight… or really anytime from dusk to 4 a.m. We appreciated the festivities but couldn’t celebrate too late. Early the next morning we had a flight to Montenegro to start the new year off in a new country.